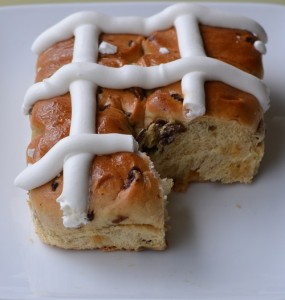 If you have no daughters,
Give them to your sons.
One a penny, two a penny.
Hot cross buns.
Traditional English nursery rhyme, first published 1798.

Good Friday comes this month, the old woman runs
With one or two a penny hot cross buns.

Hot cross buns are a traditional Lenten or Good Friday, Palm Sunday, and Easter treat that have a long history. One story says that a twelfth century monk marked buns with a cross for Good Friday; from that point on the buns were associated with the Easter season and became increasingly popular in England. However, the first historical record comes from the London street cry above. In the later 1500s the English Queen Elizabeth I issued a decree forbidding the sale of hot cross buns except on Good Friday, Christmas or for funerals.

Fascinating superstitions have been associated with the buns. One supposes that the buns, if hung in the kitchen, will protect the house from evil spirits or from kitchen fires (an ever-present danger with open fires in the past). Another superstition says that if buns are taken on a sea voyage they will protect the vessel from shipwreck. Sharing a bun with someone promotes a strong friendship for the next year; “half for you and half for me, between us two, good luck shall be.” Grating a dry bun into crumbs and mixing the crumbs with water makes a medicine to cure a cold. While we no longer believe the superstitions, we still bake and eat these Easter treats.

The buns are typically made with yeast, spices, butter, sugar, egg, milk, raisins or currants, orange peel or candied fruits, and flour. There are numerous recipes which vary slightly. One recipe comes from the Prize Cook Book , n.d., page 3, in the Digital Library. The recipe is for bath buns, with a note at the end, “A very good recipe for hot cross buns,” and does not include spices, raisins or fruits.

This recipe says, “Four large coffee cups of sifted flour, four tablespoons powdered sugar and one teaspoon salt, all mixed together. One compressed yeast cake dissolved in a little warm water; two eggs well beaten, one coffee cup warm milk, the same of warm water; stir all liquids together, with butter the size of an English walnut dissolved in them; then mix your flour as for ordinary bread. For 6 o’clock Sunday tea mix at 8 A.M.; let rise till 3 P.M. Then do not knead, but pick off pieces size of a large egg and roll round between the palms of your hands. Put in a well-greased dripping pan, an inch apart, and let rise again till 5 P.M.; then bake in a quick, hot oven. Just before they are done, brush with molasses and water, and serve with powdered sugar sprinkled over them. A very good recipe for hot cross buns” [Emphasis added].

There is no mention of decorating the bun with a cross although this is a characteristic of hot cross buns. The vague measurements given, such as coffee cups, large coffee cups, or “butter the size of an English walnut,” are typical of old cookbooks which assumed that the cook already had certain basic skills. I am curious – just how many ounces are in a coffee cup or a large coffee cup? And how do these differ from a teacup (I’ve seen these used as measurements in old recipes also)?

Modern recipes include spices such as cinnamon and cardamom and raisins or currants, candied fruits and/or grated orange peel in addition to the ingredients in the recipe above. A cross made of dough may be added before baking or the top of each bun may be slashed in the shape of a cross; these are traditional ways of decorating hot cross buns.  The modern buns are glazed before baking and a cross made of frosting is often added after the buns are baked. No recipes that this writer discovered suggested serving the buns hot, straight out of the oven, despite their name. However, originally they were served hot or warm, hence the name.

Listed below are sources for recipes more specific than the one above. Happy baking and enjoy eating this traditional tasty Lenten or Good Friday treat – hot, cold, toasted and buttered, spread with strawberry preserves, however you prefer them. I like mine buttered, but not toasted. And, since I have no luck baking with yeast, I’ll let someone else (Giant, perhaps) do it.

Traditional Irish hot cross buns recipe for Easter: Hot cross buns are more of a traditional English food, but given Ireland’s proximity to England and its Anglo-Irish citizens, it’s not surprising to find this recipe.