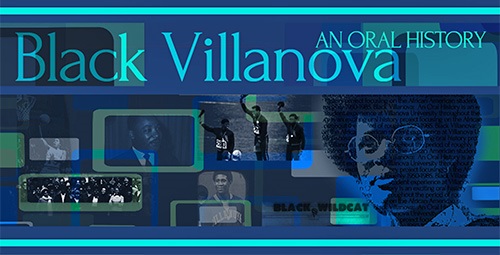 Falvey has two exhibitions on view, both related to Black History. A small physical exhibit commemorates the visit of Martin Luther King to Villanova University on January 20, 1965. The other, larger exhibit, “Black Villanova:  An Oral History,” is only available online through the Digital Library. This exhibit was curated by Thomas Mogan, PhD, then Director of Student Involvement. Joanne Quinn, team leader for Communication and Service Promotion, created the graphics.

Mogan explains, “I have always had a keen interest in the history of the civil rights movement … I was conducting research for a seminar paper on the integration of African American athletes at Villanova, and I met with Dr. Ed Collymore, former executive director of Multicultural Affairs at Villanova and a former student-athlete. He shared with me some fascinating stories about what it was like to be an African American student-athlete at Villanova during the 1950s, and that set me on my journey to learn more.” Mogan worked with the Alumni Association to sponsor a reunion for African American alumni during Homecoming 2012.

Mogan worked with David Uspal, senior web specialist for Library Services and Scholarly Applications, to create the exhibit. Uspal says, “This was one of the first partnerships between the Library and faculty in hosting a digital project, the result of which led to more Digital Humanities projects and the eventual formation of the Aurelius Digital Scholarship Initiative here at Falvey Memorial Library. The project captured an often overlooked but important and interesting chapter in university history, one that quite often doesn’t show the University in a positive light. But it’s because of this that the project is so important, as we can reflect on the history of university life for all students and, in the end grow to be a better place, reflected in our shared values of Veritas, Unitas, and Caritas.”

Two exhibits in two very different formats, but both are important examples of black history. Please visit them; they are well worth perusing multiple times.