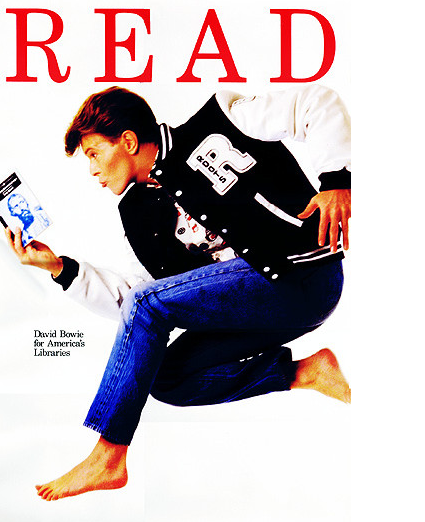 David Bowie—iconic English singer, songwriter and musician whose career spanned nearly 50 years—died on January 10 at age 69. During his lifetime he sold approximately 140,000,000 records. Bowie was inducted into the Rock and Roll Hall of Fame in 1996.

Something not well known about Bowie: he was an avid reader, sometimes finishing a book in a single day. His literary tastes were wide-ranging; a list of Bowie’s 100 favorite books includes such classics as Gustave Flaubert’s Madame Bovary and The Illiad by Homer, novels such as A Clockwork Orange by Anthony Burgess and Infants of the Spring by Wallace Thurman, and a wide variety of nonfiction works: history, biography, art, architecture and more. The list of Bowie’s 100 favorite books was compiled by Geoffrey Marsh and Victoria Broackes, curators of the exhibit, “David Bowie Is,” held at the Art Gallery of Ontario in 2013. While the full list is too long for this blog post, I am providing a random selection of books from Bowie’s list—fiction and nonfiction—that are part of Falvey’s collection. How many of these have you read? I’ll confess that I’ve read only a few of Bowie’s favorites although I am also an avid reader.

The Trial of Henry Kissinger by Christopher Hitchens

The American Way of Death by Jessica Mitford

The Gnostic Gospels by Elaine Pagels

Before the Deluge by Otto Friedrich

The Illiad by Homer

A Clockwork Orange by Anthony Burgess

Infants of the Spring by Wallace Thurman

Beyond the Brillo Box:  The Visual Arts in Post-Historical Perspective by Arthur C. Danto

The Coast of Utopia by Tom Stoppard