Sarah Wingo and Kallie Stahl in the Classroom 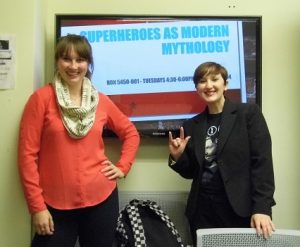 When asked how a librarian with her background in Shakespeare and other early modern English playwrights became interested in pop culture comic book superheroes, Wingo answered, “[O]ne of the things that always fascinated me about Shakespeare … is that during his time Shakespeare wasn’t seen as the highbrow cultural icon that he is today. Shakespeare’s plays were a form of popular entertainment. … I’m interested in popular culture and popular entertainment, whether it be in Elizabethan England or 2015. I’m interested in what it says about us as a society and how we engage with it as a society.

As a finale to the course, Wingo invited Kallie Stahl, a graduate assistant to Falvey’s Scholarly Outreach team, to give a presentation on her current research on fandom. Fandom, according to Stahl and the “Urban Dictionary,” consists of a “community that surrounds a TV show/movie/book, etc.” The community may include message boards, online groups and other forms of communication.

Stahl is a second year graduate student, working on a master’s degree in communication. Her interests are popular culture, new media and cultural studies. Her research on fandom focuses on “Castle,” a popular television program.