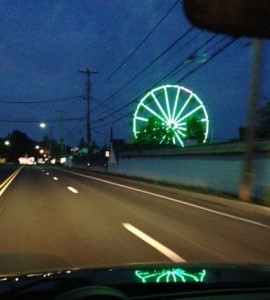 The ferris wheel at the Devon Horse Show & Country Fair.

At this time of year it seems like a festival, fair(e), or fling is around every corner. They might have games, rides, petting zoos, vendors, food, farm shows, competitions, musical performances, comedians, dancing, hay rides, fire engine rides, the list goes on! If you’re staying in the area this summer, why not visit one of the fairs and experience some local color?

The first-ever Philadelphia Renaissance Faire (Philly Ren Faire) was held last weekend in the Chamounix section of Fairmount Park. Celebrities, like Hafthor Julius Bjornsson, known for his role in the TV series Game of Thrones, was at the Philly Ren Faire to play the role of King Thor. The faire also featured the usual comedians, musicians, and costumed faire-goers.

The Philly Ren Faire should not be confused with the Pennsylvania Renaissance Faire (PA Ren Faire), which takes place every year from August – October in Mount Hope, PA. The PA Ren Faire will also have a Celtic Fling & Highland Games in late June, if you’re interested in that sort of thing.

For those unfamiliar with the concept of a Renaissance Faire, it is loosely based on the historical Renaissance period during the reign of Queen Elizabeth I in England, but it often features the Spanish Moors, pirates, Medieval characters, Vikings, wizards, elves, and more recently, cosplay.

The smaller fairs or festivals are often organized by a local township or fire company, like the Goshen Country Fair or the Malvern Fire Company Fair. The Brandywine Strawberry Festival is more than just strawberry pie tastings and as a bonus, the Coatesville Youth Initiative benefits from the proceeds. The Devon Horse Show & Country Fair has been held annually since the 1890’s. This year it starts on May 21.

I don’t know about you, but one thing I always look forward to is fair(e) food, which is very similar to boardwalk food. Corn dog? Yes, sirree! Funnel cake? Bring on the powdered sugar! Scotch eggs? With Branston pickle or mustard, please! Giant turkey leg? Hand it over! 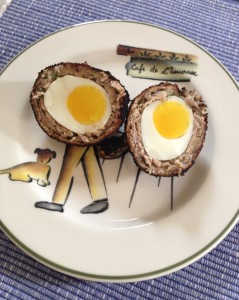 For some reason, the Philly Ren Faire didn’t have Scotch eggs available. Shocking, I know. Not to be cheated out of this delicacy, I decided to make them at home. It was my first venture into the realm of deep fried food. I followed Jamie Oliver’s recipe, but failed to keep an eye on the temperature of the oil and they came out a bit on the dark side (okay, they were burnt). However,  I was undaunted by the initial failure. Worried that the insides were not cooked due to my immediate retrieval of the eggs from the boiling oil, I placed them in the oven, preheated to 400, for about 15 minutes.

To my great surprise, they turned out pretty well. They weren’t just edible, they were delicious. (I make this assessment with all humility.) Feeling rather delighted that I was able to rescue the Scotch eggs from doom, I ventured forth into the territory of turkey legs. These, too, came out rather well. I followed the Pioneer Woman’s blog instructions for brining the turkey legs, or as she calls them, Caveman Pops, and then followed the Paleo Cupboard recipe for seasoning and roasting them. 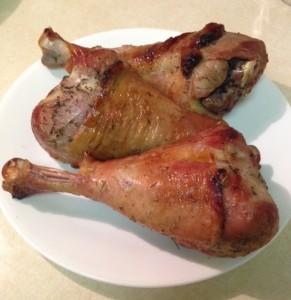 Do you have a “faire food” recipe you’d like to share? Feel free to add it to the comments section below. Or tell us about a fair(e) or festival you attended!

If you’re interested in learning more about Renaissance Drama, look for the related blog post tomorrow, May 26, written by Sarah Wingo, subject librarian for English Literature and Theatre.