Who Is Your Most Unforgettable Literary Father? 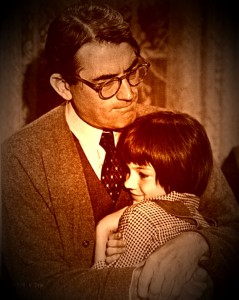 For Mother’s Day, this blog featured an article about memorable literary mothers. Now it’s the fathers’ turn. From Bob Cratchit in Charles Dickens’ A Christmas Carol to Atticus Finch in Harper Lee’s To Kill a Mockingbird, literary fathers have made an impression on and even influenced us.

The King in Shakespeare’s King Lear easily springs to mind. Lear appears to have treated Goneril, Regan and Cordelia more like subjects than daughters. The older two’s responses to their father-king seem to reinforce this notion. King Lear also features the Earl of Gloucester, whose extraordinary physical suffering is eclipsed by his psycho- logical suffering when his relationships with sons Edgar and Edmund undergo crises.

Ancient mythology provides such examples as Odysseus of Homer’s The Odyssey, whose ten-year trek compels his son, Telemachus, to embark on his own journey: a father quest. Also Daedalus, the master craftsman from Greek mythology is famous for fashioning wings so that he and his son, Icarus, could escape their imprisonment.

The father is not physically present in some stories but still influences his family, as with Big Walter Younger in Lorraine Hansberry’s A Raisin in the Sun and Mr. Wingfield in Tennessee Williams’ The Glass Menagerie. Some stories, readers may believe, might be happier if the father were not present: Dwight, for instance, the abusive stepfather in Tobias Wolff’s This Boy’s Life.

In the Bible, Jacob, father of twelve sons and one daughter, showed such partiality to his eleventh son, Joseph, that his blatant favoritism caused unintended consequences for Joseph. A different Joseph, Jesus’ self-effacing earthly father, is only mentioned in the Bible during chapters about his son’s childhood. Bonus question: Do you know the reason paintings and statues often show St. Joseph holding a lily?

Has a father from literature influenced you? Do you find any literary fathers particularly memorable? Please contribute your suggestions in our “comments” section.

Gerald Dierkes is an information services specialist for the Information and Research Assistance team, senior copyeditor for the Communication and Publications team, and a liaison to the Department of Theater.