Recently, contributors to the Aurelius Project, Laura Bang and David Uspal, participated in several PhillyDH activities in the Philadelphia Area. First off though, not familiar with PhillyDH? Here’s a quick primer (straight from the PhillyDH mission statement):

(PhillyDH) represents a friendly peer network of novices and experts alike, dedicated (for now) to the exploration of new ideas, tools, and best practices in the world of digital humanities via forums, workshops, meetups, happy hours and whatever else suits our fancy.

Begun back in the fall of 2012 out of discussions at a regional ThatCAMP, PhillyDH is a loose association of individuals interested in promoting Digital Humanities in the greater Philadelphia area. More of a volunteer-driven collective than a formal group, it has no real hierarchical structure (no officers, etc); rather, events and promotions are all started by members of the group generously volunteering their time, efforts and resources. 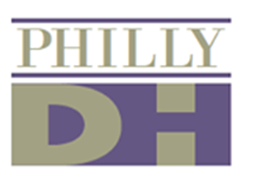 PhillyDH: we have a logo, so we must be legitimate.

An example of this: on Tuesday, June 4th, 2013 the University of Pennsylvania held PhillyDH@Penn, an “unconference” (i.e. a participant-driven meeting), at the new Special Collection Center at the Van Pelt-Dietrich Library Center. Activities for the day included two sessions of planned workshops, three rounds of unconference sessions, and a lightning round of talks (short, two minute blurbs), capped off by “The Age of Scale”, a talk by Michael Edson, the Smithsonian Institution’s Director of Web and New Media Strategy. Workshops and unconference sessions held included various topics such as Open Access Images, Video Production, Photo Editing (with free and open source products no less!),and intensity mapping, as well as on technologies including EAD, TEI and OpenRefine.

Previous to this event, on April 11th, 2013 PhillyDH met at the Chemical Heritage Foundation in downtown Philadelphia for a Project Incubator night, where over thirty local PhillyDH members gathered to offer advice, ideas and expertise for six local project proposals. The idea was for the PhillyDH community to act upon its mission statement “to learn, to teach, to collaborate, to create, to pitch-in” and help local projects move forward, for both potential projects and projects already in the works. Projects on the docket for the evening included projects exploring the educational value of gaming, mapping of historical data, and aggregating information on local events and projects, among others.

Everything poetically comes full circle when, on September 27 and 28th 2013, PhillyDH will be the host for the next Philadelphia area ThatCAMP.

When I left you I was but the learner;
Now I am the master.