Minding Your Manners for the Conference Interview 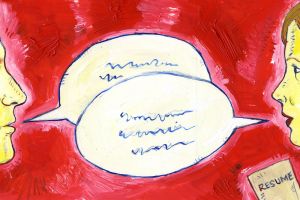 It was a heady time for a graduate student at his national conference as he rushed from one job interview to another. Late to one and out of breath, he quickly began his introductory talking points: how he was just the right fit for the position, the department, and the university. The members of the search committee sat in silence until the student paused, allowing one of them to interject politely: “I think you’re in the wrong room. You’ve been talking about another school.”

The faculty-job-search process is a particular mix of the professional and the ad hoc, the programmed and the unexpected. Unlike in corporate America where a few people, or just one, may play a direct role in nonexecutive hiring, searches for assistant-professor posts may involve scores of people, from undergraduates who evaluate a candidate’s teaching presentation to a college dean who meets with the potential hire one on one.

The campus visit by a finalist is the subject of much scrutiny, but the equally vital meet-up that happens first is the conference interview. That is the point where you meet faculty members from your desired employer for possibly the first time, and potentially the last. Because of the importance of the occasion, the conference interview is worth planning—in detail. At the same time, it is also an occasion to accept the unhappy, the surprising, or the absurd with good humor and levelheadedness.

If you can, go. It is an old insight about politics and hiring that the world belongs to the people who show up. Conference interviews are not an endangered species, but their primacy has been challenged by the increasing costs of attending conferences, the reduced (in some fields) number of positions open, and the rise of the Skype interview as a replacement. Nevertheless, if you can manage it, go to the conferences identified by your advisers.

Conferences, despite their preplanned nature, are free-flowing entities. Unforeseen opportunities will pop up. Departments may have secured permission to hire only after the conference program went to press, and then decided to hold interviews at the last minute. Or maybe a job is not yet “official,” but the department is doing selective interviews in anticipation.

You may even have others connect the dots for you. During a recent research panel at a conference, one of our doctoral students impressed an attendee who then invited the student to interview for a position he had not heard was open. Impromptu recruiting is not unusual.

If you have a choice between doing an initial interview by phone or in person at a conference, choose the latter. I have no data to prove that people who interview at conferences tend to be invited more often as campus finalists than those who interview by phone or Skype. But it simply makes sense that you have a better chance of making a good first impression of the real you if you meet key players face to face. In an era in which a single tenure-track opening attracts hundreds of applicants, any narrowing of the odds can help.

Be ready for your close-up—all the time. A friend, now a professor, once described going to a conference as a graduate student looking decidedly casual in a T-shirt, sandals, and scruffy coiffure. He planned to tidy himself later for his paper presentation. Then he ran into some people who knew his adviser and who had an opening in their department. They were just finishing their interviews but wanted to squeeze him in—in an hour. He showed up dressed nicely, well shaved, and wet-combed. A member of the committee commented, “You clean up well, young man.”

Fields and institutions differ in their sartorial and grooming standards for job candidates. If you’re interviewing for a job as an assistant professor of painting at a freethinking liberal-arts college, the dress code is going to be different than if you’re seeking to become an assistant professor of accounting at a conservative religious university. There are few academic hiring situations, however, where being “cleaned up” will make a bad impression.

Of course you must also be ready intellectually. A spontaneous interview might erupt at any moment in an elevator. Last-minute schedule changes could force an earlier-than-expected meeting: “Hello? I know we planned to meet on Friday, but we need to do our interview now because our chair is leaving early.” Furthermore, in today’s hiring environment the whole world is listening. I have heard graduate students make comments in hallways and coffee shops at the conference hotel that would not go over well if heard by members of a search committee. And who is to say they are not sitting at the next booth?

So prep for a job interview before you leave home, and be ready to go into candidate mode at the extension of a hand to shake.

Know the players and the playhouse. That 10,000-times-told piece of advice about job interviews is always right: Personalize your application, especially when you are meeting anyone face to face. If possible, try to find out which members of the department will be conducting the interview. Once you have their names, do your homework—their history, accomplishments, role in the department. You don’t need to get too chummy, but recognizing them and having something to say about a topic you share in common is always a good icebreaker and shows you care about your potential colleagues and the open position. Make sure to send their names to your references and advisers, asking if any of them have a connection.

Do research on the department, too—what it does, what it wants, and where it’s going. Take your notes to your interview. It is both helpful and impressive if you can pull out a file card (or a screen on your iPad) that lists, for example, the courses the college offers that you think you can teach.

Keep your answers short and on message. Think of a conference interview as akin to a press conference. You will get peppered with questions, ranging from the expected (“What attracts you to our opening?”) to the at-best inadvisable (“Hail from Utah, eh? So does that mean you are Mormon?”) to the zany (“If you could be any kind of nucleic acid, what kind would you be?”). Your level of coolness under fire will be one way people evaluate you. Whatever you are asked, come to the meeting with talking points and use them. If your research experience and publications exactly fit the qualifications stated in the job ad, make sure the committee knows that. Don’t let the interview end without enumerating your strengths.

Read the room. Preparation and rehearsal are vital to job interviewing, but anything can be overdone or come off as forced. And you need to be ready to adapt if you encounter topics you haven’t prepared for. Make your points, but don’t forget to listen to the members of the search committee and notice the subtler signals of body language.

There is no hard-and-fast rule about the length of your answers to questions. You should, however, through roaming eye contact, be able to gauge when enough is enough and your interviewers want you to move on.

Two rhetorical tools in your interview kit may help out in such situations. First, don’t just memorize a fixed answer to common questions. Develop both a short and long version of your answer. Second, have a “wrap up” comment in reserve that allows you to wind down when you sense they want you to finish. Example: In answer to a research question, say, “Anyway, I have much more on this in my most recent paper, and I can send it to you, if you wish.”

Don’t overschedule yourself. Conferences are expensive, budgets are tight, and the time passes quickly. Many graduate students on the job market try to maximize their investment by tightly scheduling their days and nights on site. That strategy is sensible—until it interferes with your interviews. The point is to be “tanned, rested, and ready” when your moment to shine is nigh. Showing up five minutes late, sweating and flustered, because you had another meeting that ran overtime does not make a good impression.

Plan some downtime. Rest, especially between interviews, if you can, and allow yourself Zen interludes to get ready mentally and review your notes for the next interview. Likewise, get to know the conference site plan; be realistic about how long it takes to get from one room to another. Keep in mind that while conference traversing is chock full of chance encounters with friends, it is also possible that new job contacts might surface and slow you down.

Come with handouts. A graduate student told me he had “aced” a conference interview: He had received great responses to his answers and felt like he had truly impressed his audience. The afterglow lasted for two days until he ran into a member of the search committee who obviously could not remember who he was without some awkward prompting. It turned out the panel had interviewed a dozen other candidates as well. (Not to mention that for senior professors, conferences are continual memory challenges, with hundreds of vaguely familiar faces alongside the well-known ones.)

One tactic to make you stand out is the handout. Bring extra copies of your CV, maybe even some syllabi, and so on. But also consider providing a short—no more than a page—summary of your qualifications. Some candidates go further to help memory prompts by including their photo on the page. Use that sheet to answer some of the obvious interview questions like: “Which of our classes do you see yourself teaching?”

Say thanks, but not too much. You will find wildly varying advice on the protocol of post-interview acknowledgments. My age and ancestry drive me to advise the formal: Send a written thank you (on a card, not copy paper) to anyone who interviewed you. Other senior faculty members will tell you not to bother, but I think some form of timely thanks is justified, especially if you were treated well.

A final note. One of the most tragic circumstances of modern academic hiring is that you can’t give candidates real—or really any—advice on what they did wrong. (In a future column I will talk about some ways to figure that out for yourself.) It is sad to see a candidate perform well in many ways but then display some flaws in, say, the research presentation that may eventually sink the person’s candidacy. Clueless about the error, the candidate will presumably make it again at future interviews.

David D. Perlmutter is director of the School of Journalism and Mass Communication and a professor and faculty fellow at the University of Iowa.