“Lost in a sea of conjecture”: Stokes collection fully transcribed

This week marked the completion of the first fully transcribed collection available in the Digital Library. The Stokes Collection contains a small number of letters to and a speech by William Axton Stokes (1814 – 1877) who was a Philadelphia, Pennsylvania, attorney who contributed notes and references to an U.S. edition of Mathew Hale’s (1609-1676) Historia placitorum coronae (History of the pleas of the crown) published by R. H. Small of Philadelphia in 1847. Stokes later served as a major in the U.S. Infantry during the American Civil War, including a period in 1861 commanding at the 18th U.S. Infantry Headquarters, Camp Thomas, Franklin County, Ohio. 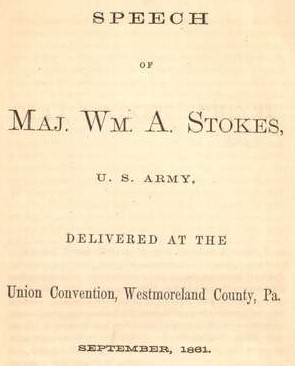 His stirring speech, at the Union Convention of Westmoreland County, PA in 1861, was delivered in support of the united American Republic and in favor of the war to crush rebellion. He denies the rebel cause by systematically positing that the rebel states have no right of secession, no grounds for revolution, and no justifiable argument against Abraham Lincoln’s election to the presidency. [Images ]

In 1874, Stokes was part of a committee appointed to report upon the operations of the Pennsylvania Railroad Company. [Images Transcription]

In addition to the Villanova University Collection, a small collection of Stokes documents can also be found in the Special Collections Department at the University of Delaware Library.

Over the last month both Susan Ottignon and Ward Barnes worked on deciphering the letters to Stokes. Seven manuscript letters are included in the collection spanning the years from 1839 to 1870. Some of these letters are to his wife Mary and relate to the death of a friend in the Western Pennsylvania Hospital for the Insane. While others ask for assistance about military duty in the Civil War.

The longest letter, which is also authored by Stokes, describes in detail the courtship, and his proposal of marriage, to Mary. This is a serial letter written over a number of days and may very well have not been mailed. It thus shows the inner dialog of Stokes as he deals with Mary’s rejection of his initial proposal:

But am I mistaken? Can I love? – I should think not, and yet how am I to account for this repulse and its manners so cold and so indignant – Could any woman who loved as one should in her situation should, could any such one do as she did? I do not know – Lost in a sea of conjecture, without knowledge [or] skill, I am tossed about by doubts and fears of this most painful nature.

I know that she would not voluntarily deceive me. Can she deceive herself? But for this one single sentence and its manner I should at once repudiate such an idea. But how else am I to answer for this?

Perhaps she may know enough, (although not very experienced) to think that an occassional repulse will … to increase the exhibition of my feelings. She forgets that this is a very dangerous scheme in its self and besides it is a game at which two can play. I will do it. I will be as reserved as she is and as she wants me to be more dignified I will give enough dignity to make her tired of it forever.