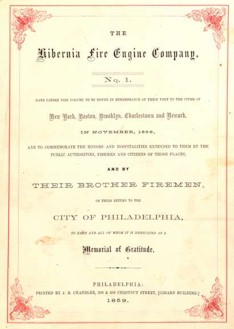 In November 1858, the firemen of Hibernia fire engine company no. 1 of Philadelphia went on tour of New York, Boston, Brooklyn, Charlestown and Newark with their state of the art equipment and a desire to bring the knowledge of this state of the art technology to their fellow fire fighters along the East Coast. Upon their return they created a commemorative volume filled with a history of the company, illustrations of the current members, and recounting the experiences and equipment of the trip; this has now been digitized as part of the Pennsylvaniana Collection. 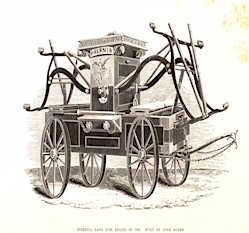 “upon hearing of a fire break out repair to the same with our buckets, bags & Baskets & there employ our utmost endeavors to preserve the Goods & Effects of such of us as shall be in danger; and if — more than one of our Goods, Houses and Effects be in danger at the same time, we will divide ourselves as near as may be, to be equally helpful, and such of us as may be spared may assist others in like danger; and to prevent as much as in us lies suspicious persons from coming into or carrying any of the Goods out of such of our houses as may be in danger, two of our Number shall constantly attend at the doors, until all the Goods & Effects that can be saved, are pack’d up and convey ‘d into some place, where one or more of us shall attend until they are delivered to or secur’d for the owner. — And upon our first hearing of Fire, we will immediately cause two or more Lights to be placed in our windows, and such of our Company whose Houses may he in Danger shall place Candles in every Room to prevent Confusion & that their Friends may be able to give the more speedy & effectual assistance. — And further as this Association is intended for General benefit, we do mutually agree, that in case a fire should hereafter break out in any other of the Inhabitants’ Houses and when none of our own Houses, Goods and Effects are in Danger, we will immediately Repair thither with our Buckets, Bags & Baskets, and give our utmost assistance to such of our Fellow Citizens as shall stand in need thereof.”

Notable among the early members of the Hibernia fire engine company No. 1 was John Barry, listed, according to the commemorative volume, on the membership rolls for 1785. Barry was the celebrated Irish naval officer and the first Commodore in the American navy who lived in Philadelphia after the Revolutionary War until his death in September 1803. 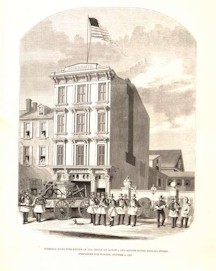 Few print copies of the commemorative volume have survived the vagaries of time but now this rare peek at the daily lives of Americans from 1859 is available to all. One of the first titles scanned and made available in the Digital Library, added September 8, 2006, this title has also just been scanned (August 2008), by the Internet Archive.

The future progression of technology and the advancement of new and superior file formats makes it difficult to be certain that any particular copy of a file will be migrated to the new, usable, and likely superior contemporary format. As few print copies of this work have survived to 2009, making multiple digital copies of works helps ensure the enjoyment of future generations of readers and researchers.