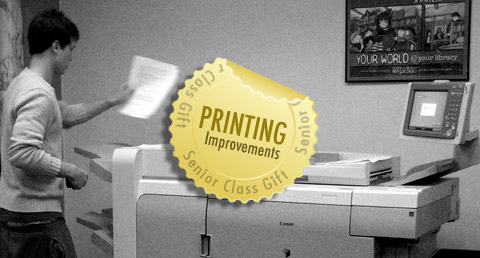 Until this academic year, Falvey Memorial Library was experiencing difficulties with its printing services. The main printer broke down constantly, resulting in down time and frustration for students and library personnel. Students were frequently unable to print their documents since the printer had been temporarily shut down. Despite the problems, Falvey’s printing operations continued to be popular with students and remained one of the busiest printing sites on campus.

However, all of that changed this year when the graduating class of 2008 decided to give its senior class gift to the Library for improved printing and computing facilities.

The 2008 senior class gift committee consisted of twelve seniors. Although the committee narrowed the options down to a few recipients, the graduating class overwhelmingly decided, through an online vote, to give its gift to Falvey. With 84% of the graduating class participating in the vote, students raised over $27,000 for the gift.

Library Director Joe Lucia explained that one third of the gift money was used to upgrade Falvey’s first floor public printer to a faster, more reliable machine. The remaining funds were spent to install new computers throughout the library building. Lucia said that, with the help of the gift, Falvey was able to install 90 new public computers.

Second-year communication graduate student Amy Lupisella, a regular user of Falvey printing, says “I’m really glad they have this new facility. I find myself spending less time standing in line in front of the printer waiting my turn. Plus, I haven’t once seen the printer out of order. I’m happy because, overall, it’s a time saver both for students and the library staff members who always had to be called on to fix it!”

When asked about the new computers, Lupisella said, “They look great, and I like the addition of Macs this year.”

Lucia is pleased that the students wanted their gift invested in the Library. “It’s reassuring to see that library services remain highly valuable to the students,” he noted.