Cat in the Stax: The Benefits of Wordle 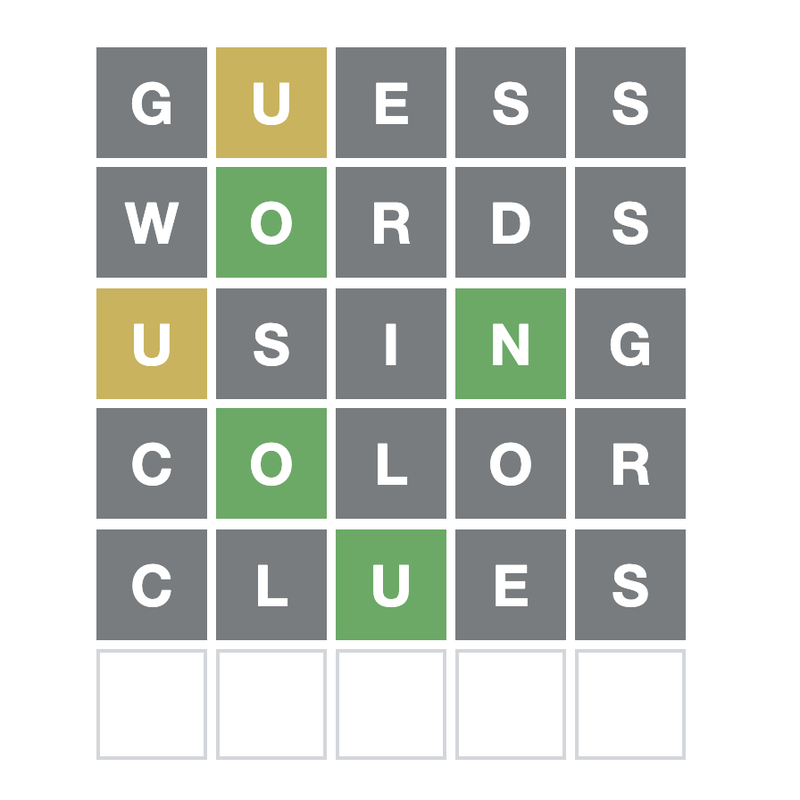 If you’ve browsed social media at all during the past few months, you’ve probably heard of Wordle. If you’re not familiar with the term, Wordle is an online word game that allows users six attempts to guess a word using color clues. There is only one Wordle each day, and it is the same for everyone. This game took the world by storm as of late and was recently bought by the New York Times (NYT) with a seven figure price tag. Not a bad payday for Josh Wardle, the man who created the game just last October.

Some are worried Wordle will be put behind a paywall by the NYT, but luckily for us Villanovans, we have access to the New York Times through our institution.

There are several games I can think of that are similar in nature to Wordle. By this I mean they’re fun and quick word games that exercise your brain. Crosswords, Scrabble, and even Words with Friends come to mind. These sorts of games can be good for mental fitness; some are even advocating for the use of Wordle in the classroom. 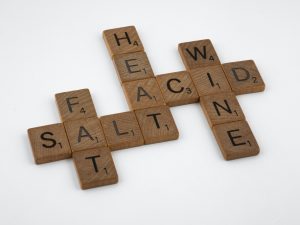 Games like Wordle can help develop critical thinking and problem solving skills in a way that is entertaining and generally more engaging than a traditional lecture. Of course, the best way to improve your skills at a game like Wordle is to know lots of words. There are more specific strategies that certainly help, such as choosing a starting word that uses several vowels and commonly used consonants, but the bottom line is that if you don’t have a relatively large vocabulary, you won’t be able to generate the necessary words.

That’s why, as a library, Falvey can help you get better at Wordle and subsequently impress all your friends. For example, we have books with games of a similar nature as Wordle that can help you train for the daily competition. You can find one such book here.

Another reason why a game like Wordle is so impactful is its ability to bring people together. This is what sets Wordle apart from other games like crosswords and word searches. Although these games are widely played, the fact that everyone deals with the same Wordle every day creates a more closely knit community of players. Plus, it’s easy to share your results with unique compositions of colored tile emojis.

Especially today, when many people are traveling less and associating with fewer people than in normal times, something that gives you an excuse to reach out to a friend or family member with a light-hearted game is certainly welcomed. Hopefully this blog helps you improve your Wordle skills a bit and makes you feel a little less guilty about spending an extended period of time playing an online game. In the correct dosage, it’s good for you!

Hispanic/Latinx Heritage Month is observed in the United States annually from Sept. 15–Oct. 15. It offers us the opportunity to pay tribute to the history, culture and countless contributions made by Hispanic/ Latinx people. 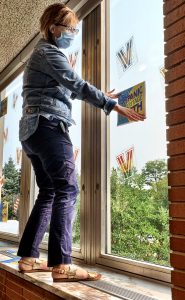 In honor of this important national celebration, a window display was recently erected in Falvey Memorial Library’s Speakers’ Corner space. As you can see, the display showcases many trademark Villanova “V’s” highlighted with the vibrant colors of various Spanish-speaking countries.

Pictured to the left is Kallie Stahl, Communication and Marketing Specialist at Falvey Memorial Library, as she carefully mounts the display. Be sure to check out the display windows if you are walking through the Library’s first floor!

If you are interested in exploring Hispanic/Latinx- related resources that are available through Falvey, you can refer the dedicated page that is a part of the Library’s Diversity and Inclusion Guide. There you will information about books, ebooks and articles. If you have come across a resource in your studies or elsewhere that you believe would make a good fit for this page on the Diversity and Inclusion Resource Guide, we invite you to fill out the request form and let us know about it! We welcome input as well as the opportunity to add to the resource page.

Since it’s Fun Friday, we thought that you might also enjoy a word search in honor of the Hispanic/Latinx Heritage Month celebrations. The word search contains the names of Spanish-speaking countries. Please take a moment to download the image below, print, and enjoy! 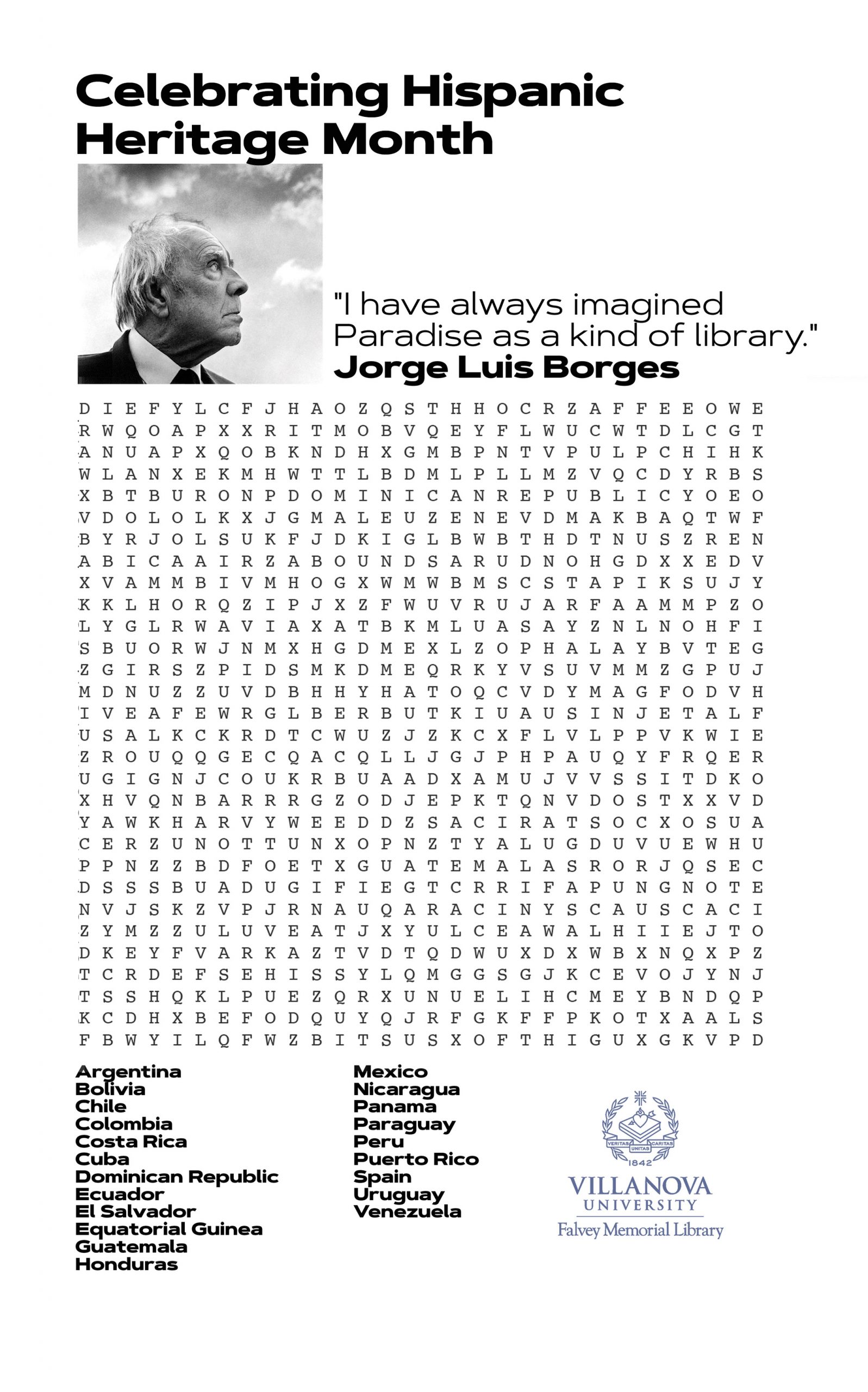 Regina Duffy is a Communication and Marketing Specialist at Falvey Memorial Library.

Hey Wildcats, looking for something fun to do today and over your long Memorial Day Weekend?

You can get all the summer vibes from Falvey’s summer word search. I recommend you print it, take it outside, and find all the words while sitting underneath the sun while drinking a glass of lemonade. (Hammock optional, but highly recommended!) 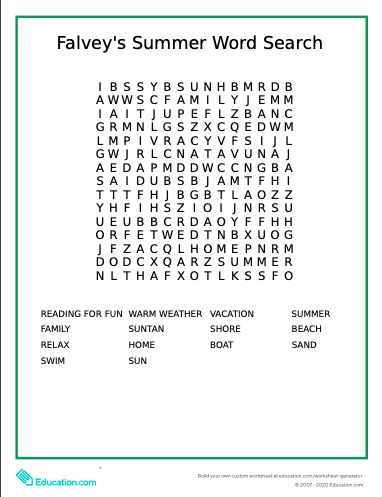 Happy Valentine’s Day, Wildcats! Looking for love? Then find your favorite literary lovebirds in the word search below! Download and print from here, or pick one up at the library’s front desk. 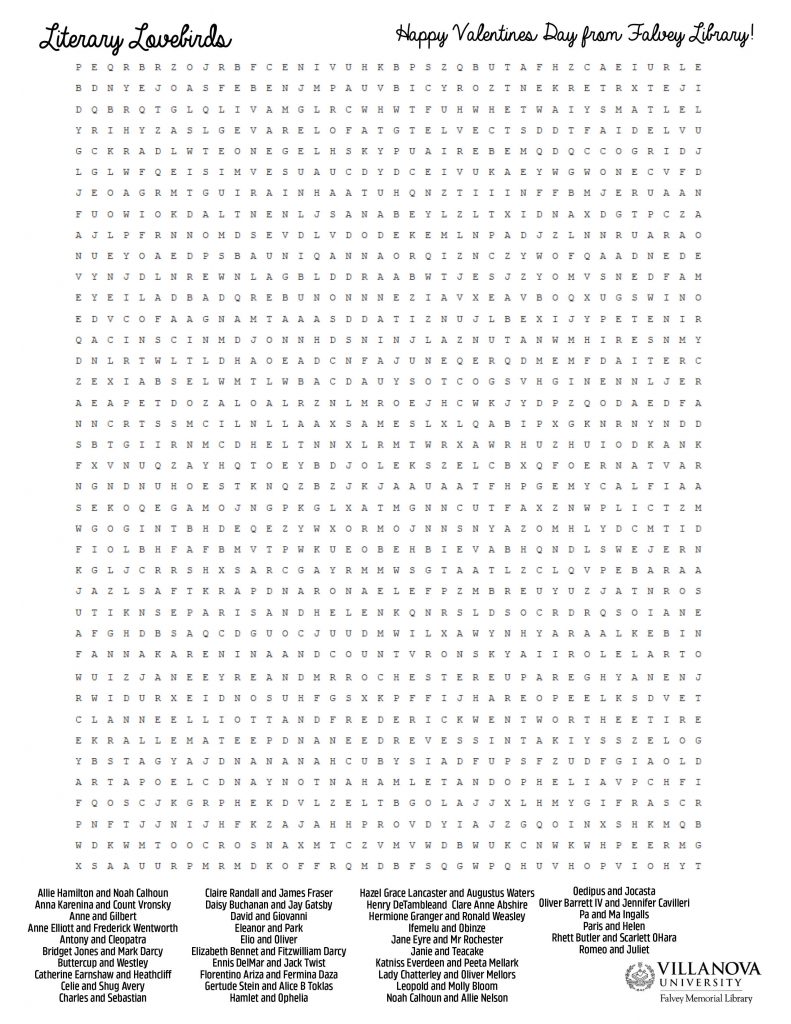 Ladders and black cats and broken mirrors—oh my!

With another edition of the unluckiest day upon us, we wanted the mark Friday the Thirteenth with a phobia-filled word search. Give it a try…if you dare!

Find13 Fears for Friday the 13th