Scholarly monographs and peer-reviewed journal articles hold positions of trust in the academic community. This trust is grounded in the peer-review process and the editorial rigor of academic presses. Much has been written about the reliability and sustainability of peer review, but comparatively little is known about the ways in which academic communities deal with the fallout of retracted publications and the existing publishing record, particularly regarding monographs.

In 1997, a group of academic editors who were concerned about author misconduct gathered informally to discuss best practices and later formalized their collaboration with the foundation of the Committee on Publication Ethics (COPE). It has published a range of guidelines to date, including their Principles of Transparency for Scholarly Publishing, Guidance on Predatory Publishing, a Code of Conduct for Editors, and Retraction Guidelines. Many academic publishers and their editors follow the COPE retraction guidelines, which include, among others, the following reasons for retractions: the fabrication, manipulation, or falsification of sources and/or data, plagiarism, and experimental or mathematical errors.

Academic journals follow widely shared and robust practices to identify retracted journal articles. Typically, a statement of retraction preceding the article itself informs the reader about the reasons for retractions as does a “Retracted” watermark in case the reader missed the statement. For example, the article about fraternal socialism by Charles K. Armstrong, published in volume 5 of Cold War History, is clearly identified as retracted for reasons outlined in the attached statement of retraction. COPE does not recommend to delete retracted articles, as they are part of the scholarly record, may have been cited, may continue to be cited, and, indeed, scholars may want to consult them. 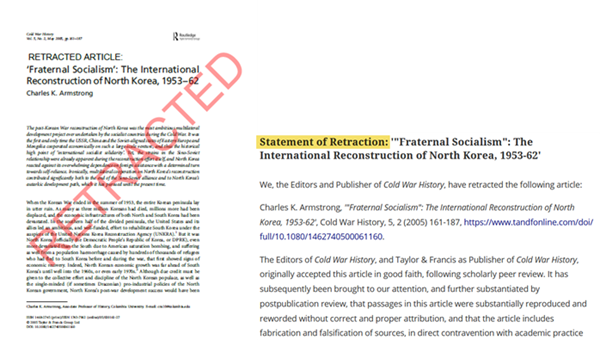 Unlike in the case of journals, there appear to be no standard practices for dealing with disputed monographs. While scholarly journals are published mostly in electronic format, monographs are still widely acquired in print format for library collections. Once a library acquires a print monograph it is out of the reach of its publisher. In the past, libraries inserted retraction notices into issues of print journals in their collection, but no comparable practice existed for print books. Most academic publishers simply withdrew disputed monographs from their catalog.

However, new and used copies of “retracted” books continue to be sold through the independent book trade for years to come. Recent digital publication models for monographs offer publishers an opportunity to identify “retracted” works. So far there appears to be little appetite to do so, but the recently established COPE working group to support book editors and publishers may yet address this need. 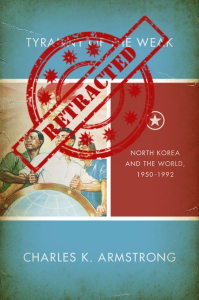 The question of what to do with “retracted” monographs is one that Falvey Library recently had to address in the case of Tyranny of the Weak by Charles K. Armstrong. The author was accused of falsification, fabrication of sources, and plagiarism. Retraction Watch and Wikipedia offer detailed accounts of the affair. In 2019, Cornell University Press, which had first published the book in 2013, withdrew the book from its print catalog, but did not issue a public statement as to why it “retracted” the work. Amazon and other book vendors continued to trade in existing print copies and JSTOR continues to offer electronic access for institutions who purchased an electronic copy.

At the time, historians in related fields of study were widely aware of the scandal through professional communication channels. After all, Armstrong was a well regarded faculty member at Columbia University and had won the prestigious John King Fairbank Prize of the American Historical Association for Tyranny of the Weak in 2014. He returned the award in 2017 after first accusations of plagiarism and source fabrication surfaced in 2016.  Students and the general public continue to read and reference Tyranny of the Weak trusting in the pedigree of its author and the press that published the work. Readers can find it in well over 700 libraries according to WorldCat records. Amazon and other vendors continue to sell new and used print copies. And, once again, it can be bought in electronic format from de Gruyter. De Gruyter does not inform the public about the history of the book, but features numerous positive reviews that predate the scandal.

After weighing available options and consulting with history faculty, Falvey Library decided to keep the book in its collection but also informed readers of its history by inserting the following note into its print copy and the related catalog record: “Cornell University Press has withdrawn this book from its catalog after substantiated accusations of plagiarism and source fabrication. The Library decided to retain its copy but to alert its patrons to the issue. Details about the case can be found on Retraction Watch (https://retractionwatch.com/).” The main rationale for retention was the integrity of the academic publication record. Tyranny of the Weak is widely cited and scholars should be able to consult it. Those that consult the book here at Villanova University will find the inserted “retraction” note at the front of the book. Alas, the same cannot be said for copies requested through InterLibrary Loan.