Saints, Students, a Scientist, and Other Sculptures

Over the summer, I’ve added a couple of new collections to the Digital Library. One of these new additions is the Villanova Sculpture Collection, documenting the sculptures found on campus. Eleven of the thirteen sculptures that I know of have been added, and I hope to photograph the remaining two by the end of this week (time and weather permitting, of course!). (Edited to add: All sculptures are now photographed and online! 9/16) 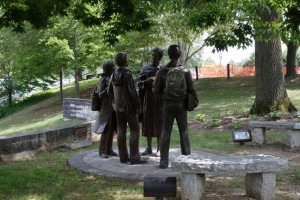 I have taken photographs of the sculptures in full view from as many sides as possible, as well as detail views of interesting aspects or attributes. Most of the sculptures are depictions of saints, including two each of St. Augustine and St. Thomas of Villanova, but there are also some other notable people and some abstract shapes. 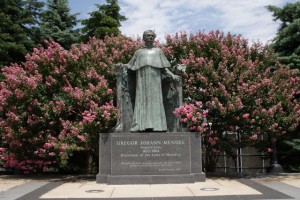 Come take a scroll through our virtual sculpture garden!

An important part of the Sherman Thackara Collection has been returned to Falvey Memorial Library from a long term loan to the Civil War Museum. General William Tecumseh Sherman’s U.S. Civil War frock coat had been reunited with the papers, photographs, and other items donated by the Sherman Thackara family, making this a unified collection once again. This specific coat was worn during the period when Sherman was a major general. Sherman was promoted to this rank officially on August 12, 1864, but it was likely he wore the uniform much earlier from 1862 when he was promoted to Major General of Volunteers just after Shiloh, so this coat was likely worn during the fateful Georgia Campaign and the subsequent Union army “March to the Sea”. One can almost smell the whiff of burning Atlanta! 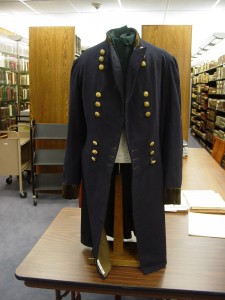 The physical coat is on prominent display on the 2nd floor of Falvey Memorial Library in the climate controlled and secure Special Collections Rare Book Room which houses other treasures of the University. A digital surrogate can be viewed online as part of the Digital Library’s Sherman Thackara Collection which documents Sherman’s family especially his favorite daughter Elly Sherman Thackara and her husband Alexander Thackara.

As can been seen in this photograph of the coat, the army’s regulations stipulated an organization of buttons to designate the rank of general officers. The buttons on a major general’s frock coat, like Sherman’s, were grouped in three sets of three; those on a brigadier general’s coat were arranged in four sets of two. This helps us date the garment to a specific date range.

Here is a detailed photograph of the buttons from the Sherman coat, which were specific to the General Staff, and worn on Union general’s coats: 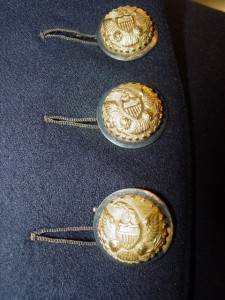 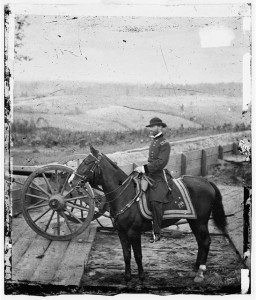 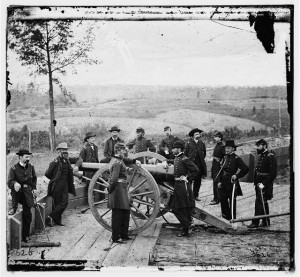