Ogonek: Russia’s Answer to Life Magazine (on trial until October 2) 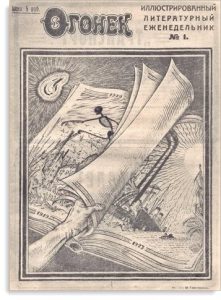 Villanova faculty, staff, and students have temporary access to the digital archive of the original Ogonek, which was published in St. Petersburg from 1899 to 1918, and to the digital archive of a later magazine by the same name published in Moscow from 1923 to 2020. The two magazines have little in common apart from title and format. Nevertheless, the 1923 reincarnation claimed descent, as can be seen on the title page of its first issue. A hand turns several pages of a bound volume, thus skipping from an image of devastation with the year 1919 marked on the page to a visual representation of a bright new day in 1923. The little flame in the upper left hand corner of the image is a visual representation of Ogonek, the Russian word for spark or little flame.

The original Ogonek started out as a weekly supplement to Birzhevye vedomosti, a newspaper published in St. Petersburg. The magazine was an immediate success and was soon published independently. The use of two-tone printing and photography set the magazine apart from its competition. It was estimated that the magazine reached around 6 million readers at its peak before the Bolshevik revolution disrupted publication in 1899. 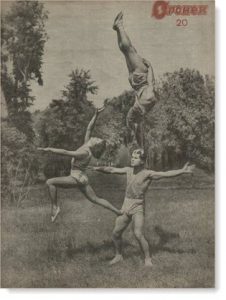 Nearly a quarter century later, M.E. Kol’tsov rekindled the little flame in Moscow. The new Ogonek had little in common with its predecessor aside from its format and name. But, like its predecessor, it rapidly grew in popularity, despite its reputation as a Soviet propaganda organ and the fall from grace of its founding editor.

Over the next 97 years Ogonek chronicled life in the Soviet Union. The magazine survived the dissolution of the Union following glasnost and perestroika. Its circulation increased dramatically after 1986 as the magazine advocated for political reform. Like many other magazines and newspapers worldwide, Ogonek did not survive increasing competition from online news and had to close its doors in 2020.

Ogonek is an excellent resource for anyone interested in daily life in the USSR. Although the images and texts offered in the magazine are mostly representations of an idealized version of Russian daily life, much can be deduced from a close study of the magazine. Both Ogonek archives are available from East View. The search interface accepts Romanized (transliterated) Russian and Cyrillic search terms. Cyrillic search terms can be entered with an integrated Cyrillic keyboard. The Cyrillic keyboard available in the search interface for the original Ogonek includes old Russian characters as the content of this archive was written using pre-reform Russian orthography. Those interested in delving deeper into the history of Ogonek should read Celebrating Ogonek, 1899-2020, an article recently published in the journal Kritika: Explorations in Russian & Eurasian History (vol. 22, no. 2, 2021).

Trial access is available to all Villanova University faculty, staff, and students. Links to the two archives will be available on the Databases A-Z list under O until the trial ends on Oct. 2. Contact us if you would like to recommend this resource for the permanent collection.