Folios from a Qur’an Manuscript
in Floriated “New Style” Script.
Courtesy of the Metropolitan Museum of Art.

Bloomsbury Medieval Studies is a unique collection that blends primary sources and interdisciplinary scholarship with a focus on the global Middle Ages. It features the Encyclopedia of the Global Middle Ages, an ongoing publication project sponsored by Arc Humanities Press in collaboration with Bloomsbury Academic.

The primary sources featured in the collection were chosen to appeal to a broad academic audience. They encompass a selection of digitized maps, manuscripts and incunabula, and over one thousand images of medieval objects from the Metropolitan Museum of Art that feature illuminated texts, textiles, jewelry, sculpture, and ceramics. Close to 300 primary texts are available in the collection. The primary texts were selected from carefully edited, translated, and published academic books, such as Classical Writings of the Medieval Islamic World (3 vols.), Primary Sources on Monsters (vol. 2), and the History of the Patriarchs of Alexandria. Arabic and other middle Eastern sources are strongly represented.

The scholarship included in the collection aims to be inclusive and offers analyses of peoples and events from all corners of the medieval world. Noteworthy examples include The Odyssey of Ibn Battuta, The Mongols, and A Companion to Global Queenship. The collection offers access to the medieval history volumes from Bloomsbury’s Cultural History series. One of them, A Cultural History of Western Empires in the Middle Ages, features a chapter on Race in the Middle Ages by Cord J. Whitaker who visited Villanova University last Fall to deliver a lecture titled “Black Metaphors: How Modern Racism Emerged from Medieval Race-Thinking.”

It also includes seven volumes from the I.B. Tauris Short Histories series including those on Anglo-Saxons, Mongols, and Normans. Digital scholarship is addressed in Meeting the Medieval in a Digital World (M.E. Davis, T. Mahoney-Steel, and E. Turnator, eds., Amsterdam University Press, 2018) and Digital Techniques for Documenting and Preserving Cultural Heritage (A. Bentkowska-Kafel and L. MacDonald, eds., Arc Humanities Press, 2017). Last, but not least, the collection features four special issues of the journal The Medieval Globe:

Overall, Bloomsbury Medieval Studies is a well-balanced melange of primary sources and scholarship that revisits familiar themes from new angles and probes new themes from a global perspective. 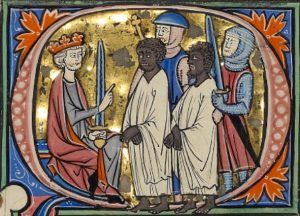