Melville’s Marginalia from the Berkshire Athenaeum

The digital preservation of books formerly owned by Herman Melville in collaboration with the Berkshire Athenaeum was recently completed, and the books have been added to the Villanova University’s Digital Library and are available for perusal in the Berkshire Athenaeum Books section. The project was completed with help from scholars at Melville’s Marginalia Online, who will be adding commentary to each volume.

As lead preservationist and first line of quality control for this project, I learned a lot about working in a digital library and about digital preservation. I gained experience handling and scanning many very different rare books, from the large, beautifully illustrated The Renaissance of Art in Italy (30 cm) to the very tiny, proverb filled The Reticule and Pocket Companion or Miniature Lexicon of the English Language (10 cm). The nine volumes of The Works of Moliere were especially challenging, as they were extremely fragile.

By far my favorite book in this collection, and the most interesting to work with, was A History of the County of Berkshire, Massachusetts in Two Parts. Melville used this book extensively after his 1850 move to Arrowhead in Pittsfield, Massachusetts. Peter Norberg, the Associate General Editor for the Melville’s Marginalia project and our lead contact for work with the Berkshire Athenaeum books, says that Melville probably carried this volume around in his pocket. It includes two large, color maps. 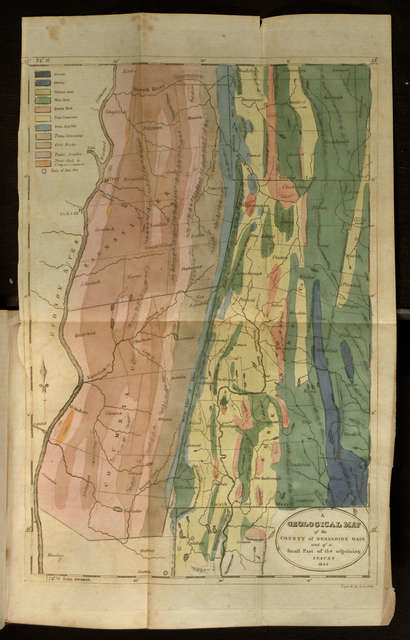 The book also contains inserts possibly added by Melville, like a two-page newspaper clipping inside the front cover. 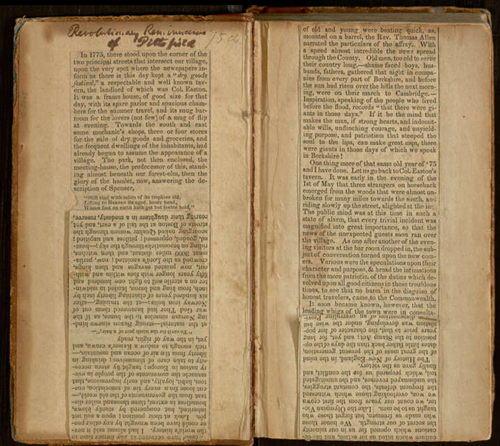 Most importantly, A History of the Country of Berkshire is filled with Melville’s notes and marks of interesting passages, including remarks that reveal his thoughts and sense of humor. 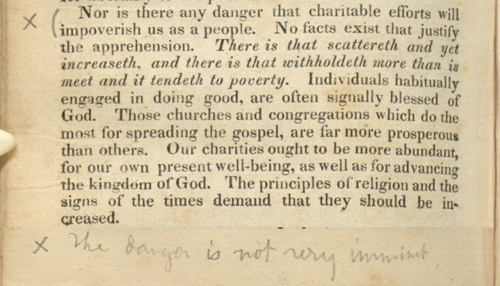 Working with this volume really made me feel like I was handling a part of history, and scanning the fragile pages, which ranged in size from the normal text, to oversized inserts, to the quadruple-sized maps, taught me a lot about digital preservation. It was sometimes difficult to scan each page for the best quality image, but I kept at it and the end result is indicative of how much effort was put into the project.

While my internship project focused on digital preservation of rare books, the Villanova Digital Library offers potential interns experience in many areas, including creating in-person and online library exhibits. I would recommend the Digital Library internship to anyone interested in digital library experience. I couldn’t have asked for a better hands-on introduction to digital library work.

Scanning in the Margins: Vestiges of Melville in Wordsworth

While it is common to find the traces of readership in the margins and end-pages of books and manuscripts, often those traces do little to illuminate the thoughts and subsequent works of that particular reader. The form that these traces take can be as complex as actual sentences with textual notes that curl and loop around the margins of the printed lines, or as brief as a check drawn to highlight a particular passage. Known as marginalia, these tracings to the expert eye provide clues that elucidate a writer’s inner thoughts while reading a particular passage and often shed light on later works.

In early June the Melville Marginalia Online scholars were able to go one step further and secured access rights to digitize an actual physical volume owned and annotated by Melville. This volume, the Complete Poetical Works of William Wordsworth, is richly annotated by Melville and important to scholars of Melville’s life and thought; indeed an article has been written about this specific volume by Thomas Heffernan. And this book has really traveled: Melville took this volume with him on an ocean voyage to the Pacific in 1860, with his brother Thomas as captain. Now owned by the Woodstock Theological Seminary in Washington, D.C., the work was transported to Villanova for digitization. As time was limited to keep the book in-house, members of the Digital Library Team worked quickly to complete all of the scans and to check the quality of all of the images before the book was back on the road again, this time going south. Some books seem to live lives filled with constant streams of movement, fated to pass between owners, or in this case, to travel the world!

Here is a link to the digitized work.

For more information about this volume and Melville’s Wordsworth marginalia, see:

For more on literary marginalia, see: