“Antarctica is a world of colour, brilliant and intensely pure. The chaste whiteness of the snow and the velvet blackness of the rocks belong to days of snowy nimbus enshrouding the horizon. When the sky has broken into cloudlets of fleece, their edges are painted pale orange, fading or richly glowing if the sun is low. In the high sun they are rainbow-rimmed.” 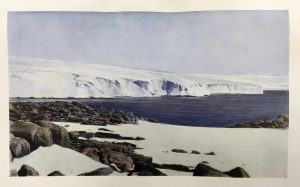 “Antarctica is a world of colour…” from Sir Douglas Mawson’s Home of the Blizzard, v. 1.

I recently finished cataloguing a collection of books about Antarctic exploration that were donated by James Wheeler, M.D, at the end of last year. We are excited to receive this collection, both because we have many books and maps about travel and exploration in our existing collections (including a few on Antarctica and more on the Arctic region) and because of the importance of the history of the polar regions as they undergo rapid changes due to climate change. 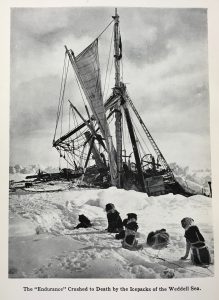 “The ‘Endurance’ Crushed to Death by the Icepacks of the Weddell Seas” from Argonauts of the South by Captain Frank Hurley.

The collection largely focuses on the “Heroic Age” of Antarctic exploration, a designation for the time period spanning the final years of the 19th century through the first two decades of the 20th century, roughly 1895 to 1922 (exact dates are disputed among scholars). [1] This era includes the expeditions led by Roald Amundsen, Robert Falcon Scott, Ernest Shackleton, and others. John Stewart notes in Antarctica: An Encyclopedia, “It was the Edwardian era, when the gentleman was role model, and nobility and purity of spirit were applied to exploration and captured the attention of the civilized world.” This attitude is certainly evident in the memoirs and early biographies of these expeditions and their leaders, before scholars in the later 20th century began taking a more critical look at some of these heroes. [2] 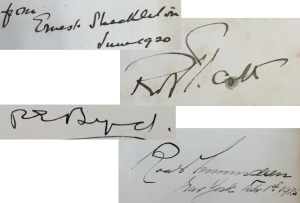 Other books document the years before and after the Heroic Age. On the earlier end, these include descriptions of James Cook’s second voyage from 1772-1775, in which he was commissioned to find out whether the hypothesized “Terra Australis” (“South Land”) existed, and the voyages of James Weddell in the 1820s. Later explorations include those of Charles Neider, who traveled to Antarctica three times in the 1970s (and also edited numerous editions of Mark Twain’s work), and the 1950s expedition of Vivian Fuchs and Edmund Hillary, the first successful overland crossing of the continent via the South Pole. Also included in the collection are annotated editions of explorers’ journals and scholarly references on the history of Antarctic exploration. You can browse all of the Antarctic titles in the James Wheeler Collection in the library’s catalog. 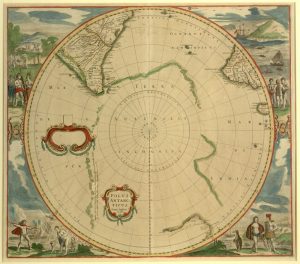 Polus Antarcticus, a 1645 map of “Terra Australis Incognita” (the then uncertain southern continent) from the Smith Antique Map Collection.

The books on Antarctic exploration represent only the first part of Dr. Wheeler’s donation. He is also donating more books on Arctic exploration, which I will begin cataloguing soon, so stay tuned for more adventures in the cold and icy regions at the top of our planet!

If you would like to see these Antarctic treasures, request an appointment with the Rare Book Room staff. We welcome scholars as well as those who are just curious about history. These materials are not stored in the Rare Book Room, so we do require advance notice in order to have them ready for visitors. 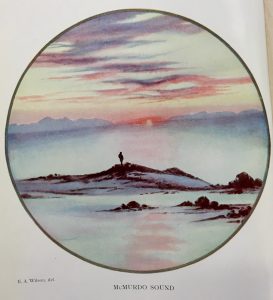 [1] The term “heroic age” or “heroic era” was not used by contemporaries of that time period, but instead was coined later in the 20th century.
“Heroic Age of Antarctic Exploration.” Wikipedia. Accessed 12 Feb. 2020. https://en.wikipedia.org/wiki/Heroic_Age_of_Antarctic_Exploration