Everything But the Shark Week: Considering the Lobsters 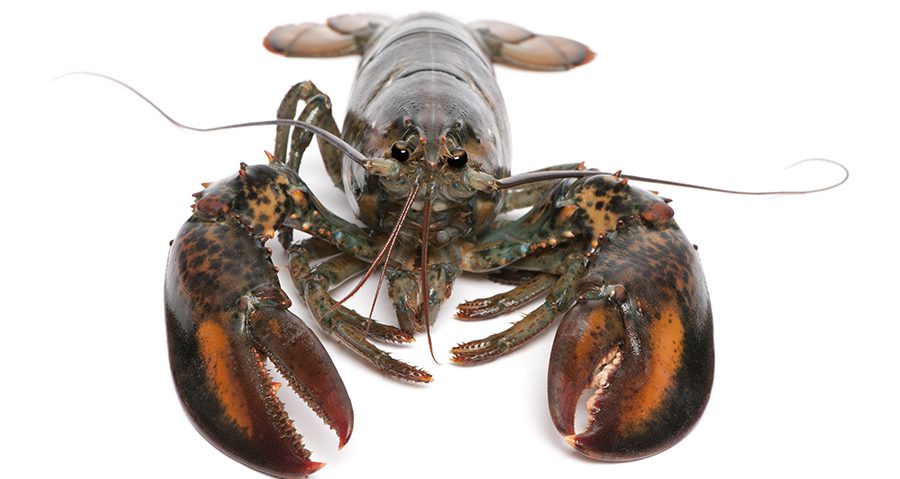 Lobsters have not always gotten respect, nor were they the gourmet delicacy we consider them today. In American Colonial times, the creature (aka the “cockroach of the sea”) washed up to the shore so plentifully (reportedly in two feet wide by two feet deep piles), that it was used as bait or fertilizer for crops, and consumed mostly as a very inexpensive source of protein.

Colonists saw how this leggy harvest provided a prodigious food source for the American Indians, and followed suit; in fact, lobster was on the menu at the first Thanksgiving. But it was so plentiful that people complained about having to eat it too often; urban legends abound that prisoners and servants would sue in order to not be fed lobster more than three times a week.

Ultimately, advances in canning, refrigeration and transportation allowed city dwellers and those in non-coastal areas to sample the creature’s delicious meat, creating a demand that resulted in people willing to pay top dollar for it.

According to the State of Maine Department of Marine Resources (DMR), the value of the state’s commercially harvested marine resources exceeded over $600 million dollars in 2018, making it the second highest year on record. Lobsters accounted for over 75% of this bounty, landing almost 120 million pounds.

And yet, lobstermen still call them bugs!

But enough about food. We’re here to tell you that the creatures themselves are amazing even when they are not covered in butter on a grilled split-top bun! Lobsters are one of a kind in the animal kingdom. For example, did you know….

Lobster-link-alooza! A shellabration of info:

Check out these resources, available at Falvey, or through interlibrary loan:

Inspirational in literature and pop culture: 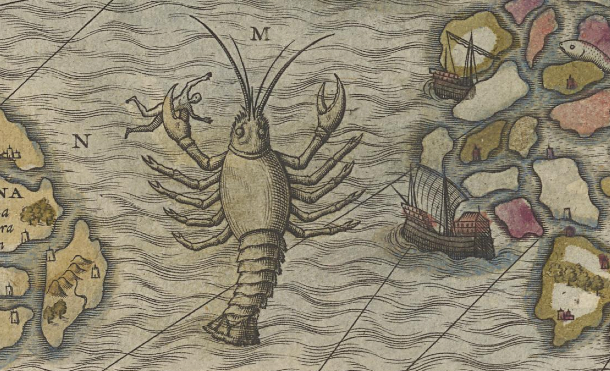 Too many poets to mention were inspired by lobsters, but check out New Englander poets Troy Jollimore and Ann Sexton; Scottish Orcadian George Mackey Brown, and even Jersey’s Walt Whitman’s A Song of Joys for wonderful lobster-verse.

Stephen King: One might think that as the reigning king of Maine-based fiction, SK would often feature lobsters, but seems to only have featured them as lobstrosities in The Dark Tower (begins in 1982) series.

The other King, Richard J., is a better source. He is an educator, author, illustrator, and edits the online reference site Searchable Sea Literature. (Incidentally, had his first lobster at the Main Line Seafood in Ardmore!) His book Lobster (2011) is must-read for a compendium of fun lobster facts and history.

Stewart O’Nan, who has collaborated with Stephen King, wrote Last Night at the Lobster, (2007) a novel which takes place over the course of the final shift at a Red Lobster being permanently closed by corporate, and the impact of it on its local blue-collar workers and clientele.

David Foster Wallace’s Consider the Lobster  (2005) essay visits the Maine Lobster Festival (cancelled this year because of COVID), where PETA usually makes an appearance. DFW articulates troubling questions about lobster and whether they feel pain; asking hey, don’t they behave like you or I would if thrown into a boiling pot of water?

Linda Greenlaw – who was featured in Sebastian Junger’s The Perfect Storm, takes readers though a lobster season in The Lobster Chronicles: Life on a Very Small Island (2002) and these days writes a Maine-based mystery series.

Elizabeth Gilbert – Stern Men (2000) From the author of the popular Eat, Pray, Love, is her debut novel about life, love and lobster-fishing.

Duncan MacMillan –  The Most Humane Way to Kill a Lobster (2012) – This British play utilizes lobster cooking metaphors of deep freezes and slow boils to mirror a midlife crisis.

Trevor Corson’s The Secret Life of Lobsters (2009) – for a look at lobsters when they think we aren’t looking.

Nancy Frazier’s I, Lobster: A Crustacean Odyssey (2012) explores the lobster as symbols in art, myth and science.

Christopher White‘s The Last Lobster (2018) Examines the boom and possible crash of the lobster industry. Warnings to conserve began as early as 1900, with the poet Holman F. Day’s message to lobsters: “tell the dodo that you saw us when you lived down here in Maine.”

Also, surprisingly, in our online collection is a cute children’s picture book by Martha Rustad called (not surprisingly) Lobsters (2008).

And, finally, if you’re thinking about going into the business, don’t miss Bruce Phillips’ Lobsters: Biology, Management, Fisheries and Aquaculture (2013) for exhaustive coverage of lobster biology, management, and conservation. This book is one of hundreds of print or online resources on the business of lobstering in our collection.

Your reward for scrolling this far: 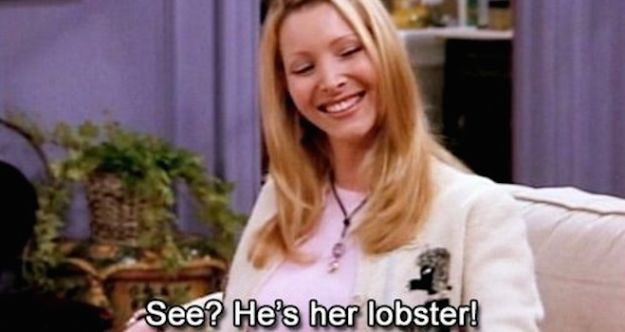 …and of course, Phoebe Buffay from Friends provides your #1 lobster fact: “It’s a known fact that lobsters fall in love and mate for life!”

If you’re on your way down east, don’t miss Reds’ Eats in Wicasset, Maine. But, according to the New York Times, be prepared to spend a bit this year, as lobster rolls are reportedly up to $34 each  (but still worth every bite.) #blamethepandemic.

Or, stay in town and check out the Cousins Maine Lobster truck schedule­–they bring the lobster to you…and even found time to write a book about how they do it.

Joanne Quinn ’15 MA, ’84 CLAS is Director of Communication and Marketing at Falvey Memorial Library. She will pay $34.00 for a lobster roll if she has to.

Everything But the Shark Week: Stingrays

To paraphrase comedian Jerry Seinfeld, what’s the deal with stingrays? Am I right? Are they the frightening creatures that punctured Steve Irwin’s heart? Or the creatures you see all the toddlers petting at the local aquarium? Or, maybe, just lovable, singing creatures like Finding Nemo’s Mr. Ray? (Or all of those things?)

Much of what we know about stingrays comes from their news features, like the 2012 stingray photo bomb. The most recent appearance of stingrays in the headlines happened in June 2021 when a Tik Tok video of a man tickling a stingray went viral. This led to debate over whether or not the stingray was enjoying the experience. The verdict was that while stingrays don’t mind being touched, they like to be touched in their own habitats, not while suffocating.

So, in the words of one famous sting ray, “Climb aboard, explorers!” as we “dive deeper” into the depths of stingray facts found in Falvey’s collection!

DID YOU KNOW STINGRAYS…

…can weigh up to 800 lbs? The same weight as a moose or grizzly bear!

…Ancient Greek dentists used the venom from the stingray’s spine as an anesthetic?

…groups of traveling stingrays can contain up to 10,000 individuals and are called a “fever”?

…Fossil records date stingrays back to the Jurassic period, about 150 million years ago?

…there are over 200 species of stingrays?

Here are some stingray fiction options!

Everything but the Shark Week: Learning About the Mystical Narwhal

This week marks the 33rd anniversary of  Discovery Channel’s Shark Week. This annual summertime milestone is celebrated with documentaries, specials, articles, and social media posts, all honoring the mystery and majesty of one of the ocean’s most feared and voracious predators—the shark.

While there are many reasons humans find sharks fascinating, the ocean’s many other inhabitants should not be overlooked. In fact, countless sea creatures are  yet to be named or even discovered.

According to Marine Bio, “an estimated 50-80% of all life on earth is found under the ocean surface and the oceans contain 99% of the living space on the planet. Less than 10% of that space has been explored by humans. 85% of the area and 90% of the volume constitute the dark, cold environment we call the deep sea. … Currently, scientists have named and successfully classified around 1.5 million species. It is estimated that there are as little as 2 million to as many as 50 million more species that have not yet been found and/or have been incorrectly classified.” So, there is proof that we still have a lot more left to learn the extent to what really lives beneath those seemingly calm ocean waters.

The narwhal is just one of the many strange and beautiful sea creatures that captivates people. This greatly understudied arctic whale leaves a lot of the imagination. Many believe that narwhals are fictional creatures plucked right out of children’s stories; glittery, sparkly, and magical cartoon-like figures. However, these mystical “unicorns of the sea” are very real.

While there is still a lot left to discover, see the resources below to learn what we do know about these elusive creatures.

Crack the Curious Case of the Narwhal with Some Fun Facts: 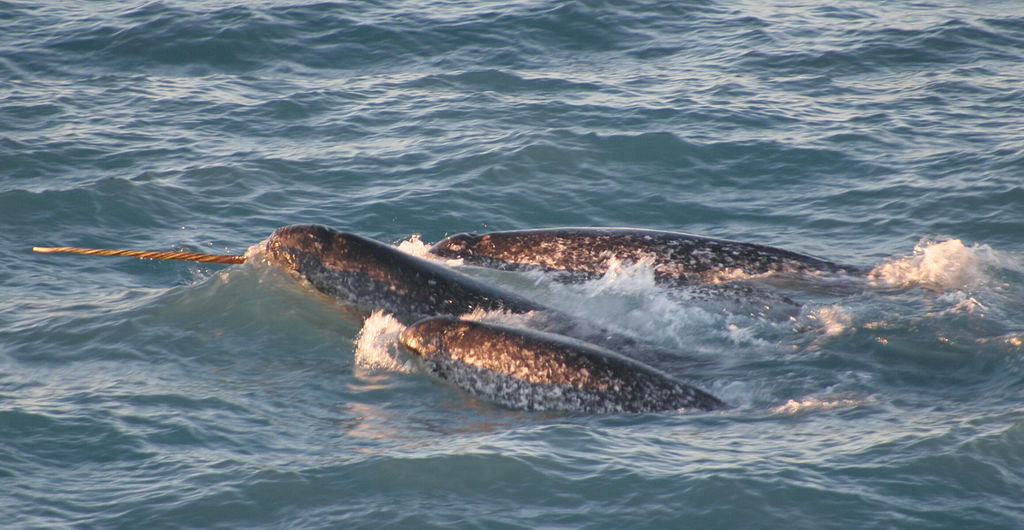 Dive Deeper into the Narwhal’s Nest:

The above facts were drawn from several books available in the Library’s collection.