Our latest Project Gutenberg release (created by the Distributed Proofreaders team using scans from our Digital Library) is The Unique Story Book, a chapbook from the Multum in Parvo Library series.

This tiny, 16-page volume, published in 1895, contains six brief anecdotes relating to the American Civil War. Like many other Multum in Parvo Library volumes, the text appears to have been borrowed from other sources. In at least one case, the borrowing was rather poorly done, as an anecdote is entirely missing its punchline. (The transcriber’s notes at the end of the document list another source for the same story and provide the missing text).

From the University Archives: Welcome to Class of 2026

From the University Archives: Welcome to Class of 2026

A Peek into First Year Orientation of the Past 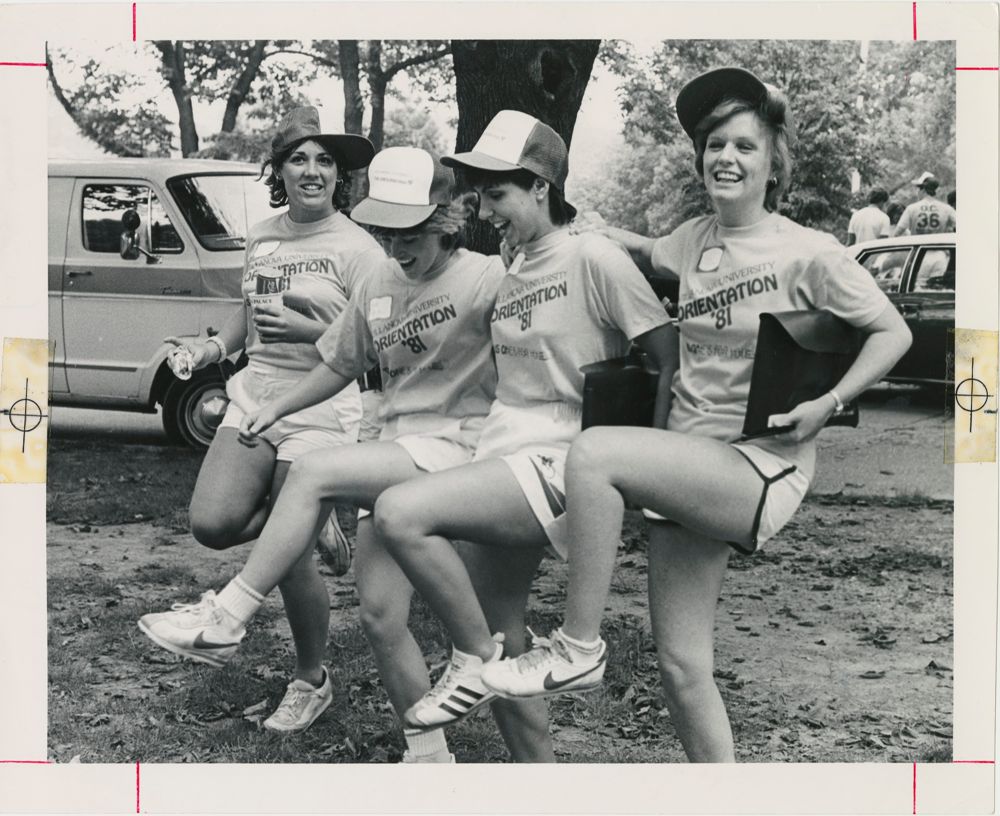 New Student Orientation is designed to welcome and introduce students to what it means to be a Villanovan. During Orientation, first-year and transfer students participate in programs, presentations and activities designed to familiarize themselves with academic and cultural life at Villanova. In celebration of Villanova’s orientation tradition is photographs from orientation throughout the years. 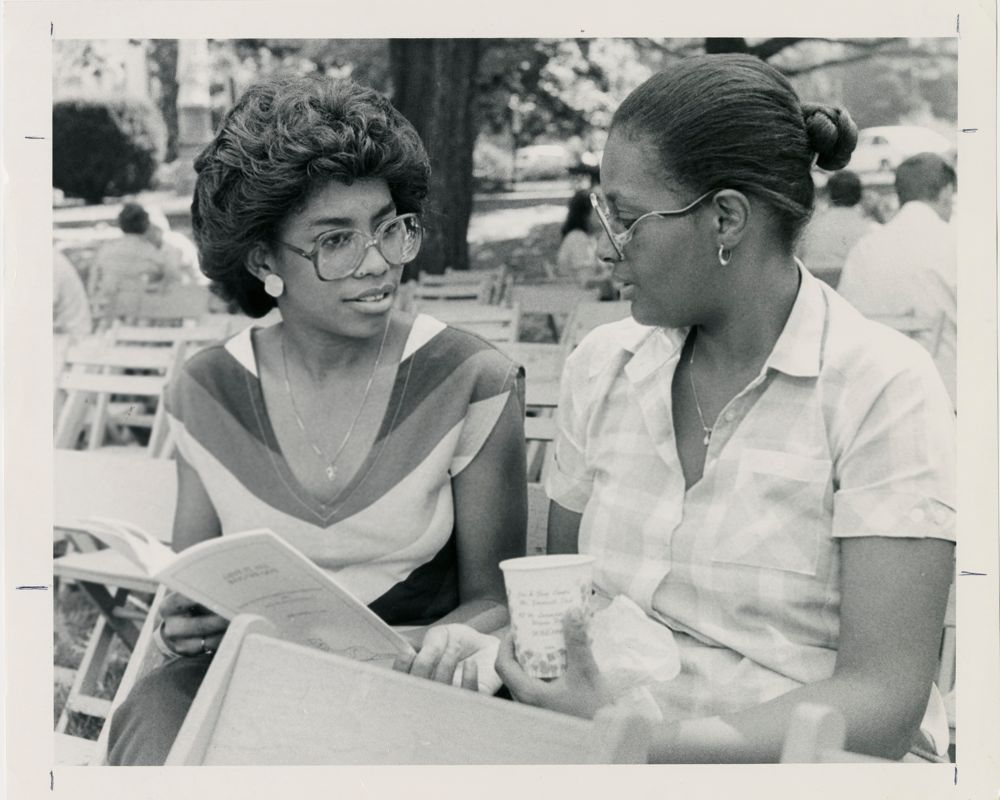 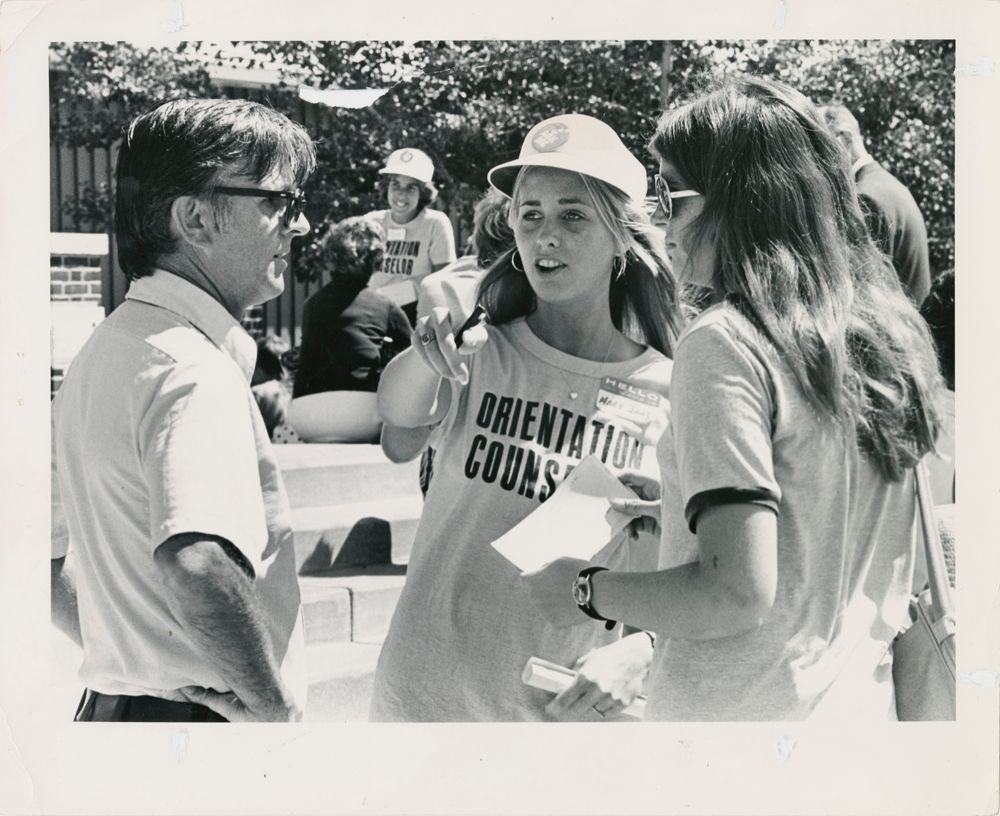 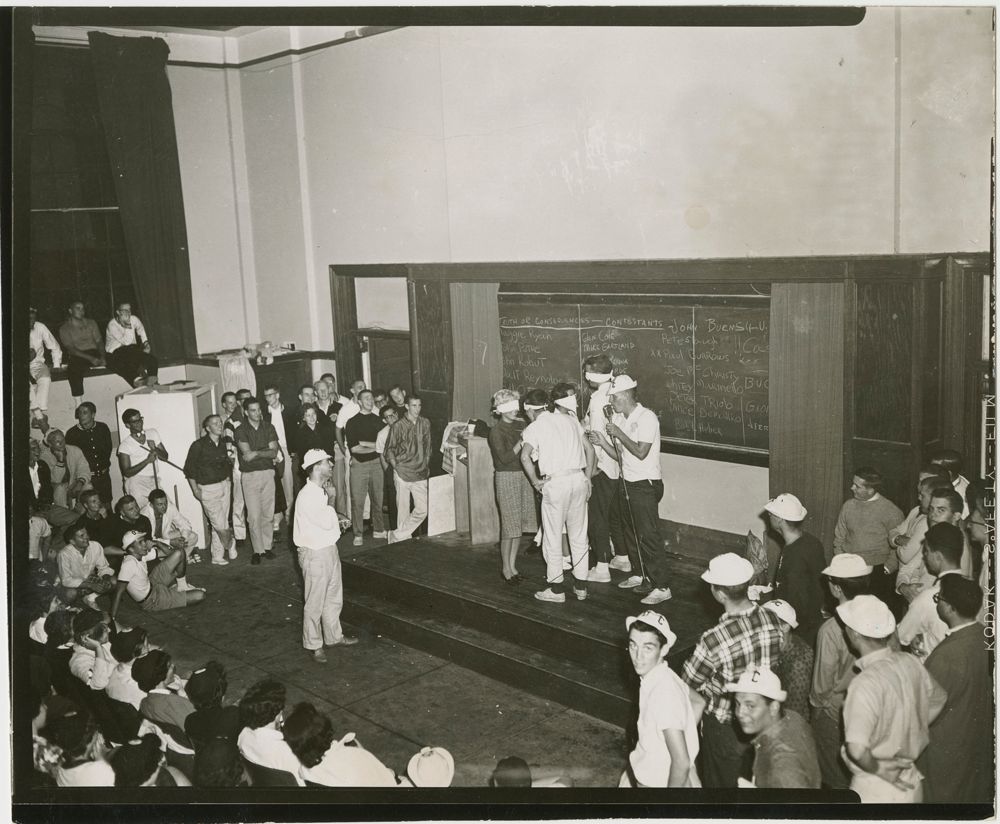 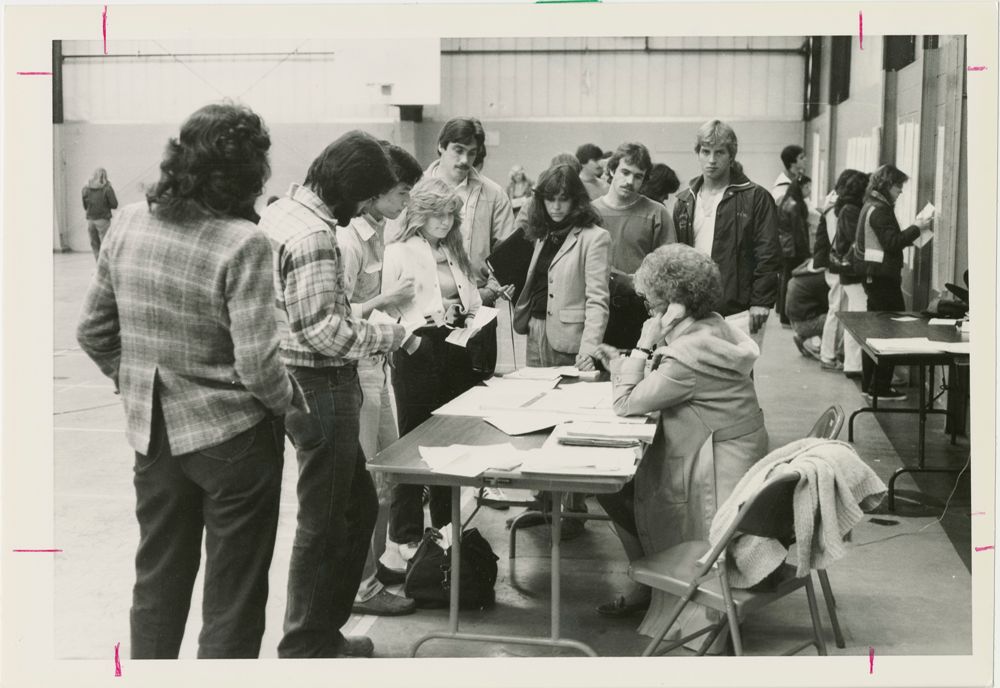 eBook available: Betrothed for a Day

Laura Jean Libbey was one of the most popular and well-known authors of story paper melodramas. Her success was so great that publisher Street & Smith dedicated an entire series to her works, an honor that they bestowed on only a small handful of authors. Our latest Project Gutenberg release (produced by Distributed Proofreaders from scans in our Digital Library) is the second volume of the Laura Series: Betrothed for a Day; or, Queenie Trevalyn’s Love Test.

The novel tells the story of John Dinsmore, a poor young author who falls in love with the beautiful Queenie Trevalyn after saving her life in an elevator accident, but whose marriage proposal is rejected when his beloved learns of his poverty. Being a melodrama of its time, there are quite a few of the usual twists and turns from here: sudden turns of fortune, wills with unusual conditions attached, railroad disasters, duels, impersonations and murders. The author never strays too far from the usual formula.

You can see how it all ends in the free eBook, available online or downloadable in popular formats, at Project Gutenberg.

Once again, a book from our Digital Library has been posted to Project Gutenberg with help from the Distributed Proofreaders project. This latest release is another entry from the Multum in Parvo Library of tiny chapbooks: The Handy Manual: A Veritable Mine of Useful and Interesting Statistics, Information, Etc.

As the title suggests, this book is a collection of random facts, starting with the lifespans of various animals and ending with the dates that American states were admitted to the union (ending with Wyoming in 1890). Like other books in the series, this one was clearly designed with commercial intent; some of the listings transition awkwardly into advertisements, like this set of “Interesting Facts:”

The Atlantic Ocean includes an area of 30,000,000 square miles. Suppose an inch of rain to fall upon only one-fifth of this vast expanse, it would weigh 360,000,000 tons, and the salt which, as water, is held in solution in the sea, and which, when the water was taken up as a vapor, was left behind to disturb the equilibrium, weighed 16,000,000 more tons, or nearly twice as much as all the ships in the world could carry at a cargo each. It might fall in a day; but occupy what time it might in falling, this rain is calculated to exert so much force—which is inconceivably great—in disturbing the equilibrium of the ocean. If all the water discharged by the Mississippi River during the year were taken up in mighty measure, and cast in the ocean at an effort, it would not make a greater disturbance in the equilibrium of the sea than the fall of rain supposed. And yet so gentle are the operations of nature that movements so vast are unperceived. Another interesting fact is that you can get a beautiful garnet and opal ring absolutely free. This great offer is made by a reliable firm to introduce their goods. Send twelve cents in stamps to W. S. Everett & Co., 113 Munroe Street, Lynn, Mass., requesting them to mail you a sample of their celebrated Perfumery, and they will mail free with it a beautiful garnet and opal ring. Send them strip of paper showing size around your finger.

If you’re interested in the rest of the text, you can find the entire book on Project Gutenberg, where you can read it online or download it in popular eBook formats for free.

The latest story to make its way to Project Gutenberg from our Digital Library (with significant help from the Distributed Proofreaders project) is a work of early science fiction: Dick and Dr. Dan; or, The Boy Monster Hunters of the Bad Lands. This story was serialized from March 17 to May 3, 1900 in the Happy Days story paper and was never collected in book form (until now).

The story tells of two boys sent by the National Museum to investigate reports of a Plesiosaurus sighting in the Bad Lands of Wyoming. In addition to featuring standard story paper subplots involving romance, the value of hard work, and stolen inheritances, the story has quite a bit of action involving prehistoric monsters, which is unusual for a paper whose stories were more frequently dominated by more down-to-earth themes like baseball and fire fighting. The fact that the story was quickly forgotten and had no immediate follow-ups or imitators suggests that it came out a bit ahead of its time; a few decades later, this type of story would generate a lot more excitement with young audiences. The similarity between the Plesiosaur’s first appearance here, as portrayed in the cover image, and that of Godzilla in his first film is striking, if almost certainly entirely coincidental.

If you want to check this one out for yourself, the full text can be read online or downloaded in popular eBook formats through Project Gutenberg. 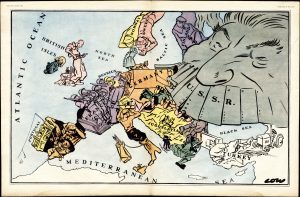 Maps do far more than showing us the locations of places. They can persuade viewers and shape their perceptions of the world. They can also offer critical insight that leads to world-changing decisions, especially in times of war.

Art of War: Illustrated and Military Maps of the Twentieth Century, an upcoming exhibition co-curated by Rebecca Oviedo, Distinctive Collections Archivist, and Christoforos Sassaris, Distinctive Collections Coordinator, explores the creation and various uses of illustrated and military maps in the twentieth century. The maps are drawn mainly from the most recent addition of items generously donated to the John F. Smith, III and Susan B. Smith Antique Maps Collection. Several maps from this extensive collection have been digitized and can be viewed on Falvey’s Digital Library. You may also access an audio tour in which Mr. Smith comments on the maps’ significance. 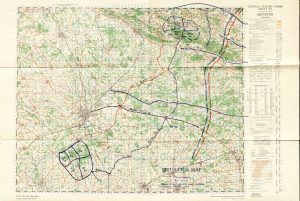 The maps on view will range from strategic situation maps used by the US military to pictorial maps that implement satire and caricature to influence public perception of ongoing conflicts. Together, these maps shed light on how the spread of information—both textual and visual—took part in shaping major conflicts of the twentieth century.

Art of War: Illustrated and Military Maps of the Twentieth Century is co-hosted by Falvey Memorial Library and the Office of Veterans and Military Service Members, and will be viewable on both the first floor of Falvey Memorial Library and in the Prince Family Veterans Resource Center starting on September 8th through the remainder of the fall semester.

We hope to see you there! 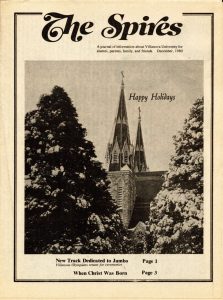 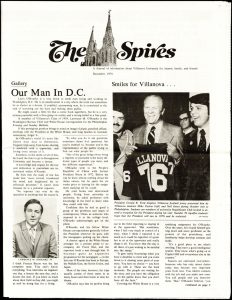 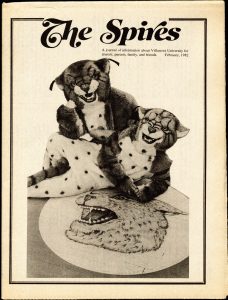 Before Villanova Magazine there was The Spires, published from October 1974 to December 1984. The first issue introduces The Spires as a new publication that combined the Villanova Alumnus and The Capsule, previous publications that brought campus news to the alumni community.

The Spires takes its name from the twin gothic-styled towers atop the main chapel. They have been a landmark along the Main Line for more than three quarters of a century. The spires, which rise nearly 130 feet in the air, capture the eye of the visitor and dominate memories of the Villanova campus.

The latest title added to Project Gutenberg by the Distributed Proofreaders project is another dime novel from our Digital Library: Love’s Labor Won, by Mrs. E. D. E. N. Southworth.

First serialized in the early 1860’s, this novel is set in the early days of America’s independence, spanning from the end of George Washington’s presidency through the War of 1812, though its historical backdrop is of limited significance to the actual plot. The focus of the story is on its characters and their relationships, and in particular on the corrosive effects of a single secret across two generations of a family.

If you’re interested in learning more, the entire book can be read online or downloaded in popular eBook formats through Project Gutenberg.

The latest eBook released to Project Gutenberg by the Distributed Proofreaders project using images from our Digital Library is another dime novel from the Bound-to-Win Library: Little Hickory; or, Ragged Rob’s Young Republic, a “success story” in the mold of Horatio Alger, Jr.

Written by George Waldo Browne using his “Victor St. Clair” pseudonym, the book tells the story of “Ragged Rob,” a young New York bootblack who helps to save Elihu Cornhill, a naive visitor to the city, from scammers and thieves. In gratitude (and because he is horrified by urban living conditions), Cornhill decides to take Rob (plus his family and friends) back to the country to start a new life, but their reception is not quite what he had expected.

This book describes social problems like economic inequity and prejudice in a more detailed and realistic way than many of its contemporaries, but being a dime novel, it ultimately doesn’t try to address them in any serious way, resolving itself through expected genre conventions rather than any attempt at realism. Still, like other popular fiction of its time, it provides a time capsule of social attitudes (not to mention slang).

If you would like to try this one for yourself, you can read it online or download it in popular eBook formats for free through Project Gutenberg.

Two more Project Gutenberg texts have recently been created by the Distributed Proofreaders project using images from our Digital Library. This time, the books in question are Neva’s Three Lovers and Neva’s Choice, a pair of novels compiled from an earlier story paper serial written by Harriet Lewis, the wife and frequent collaborator of fellow dime novelist Leon Lewis.

The two books are really one continuous story, split up purely because of the story’s length — the first book ends abruptly without so much as a cliffhanger, and the second picks up directly from that stopping point. This story tells of the trials of Neva Wynde, a British woman whose widowed father remarries while she is away at school, and whose new stepmother turns out to be far less noble than her father believes. In the fashion of most story paper serials of its type, there are quite a few romantic entanglements, wild coincidences, and dangerous situations before the inevitable happy ending. Veterans of this genre will probably see most of the plot twists coming, but if you’re not already familiar with the conventions of 19th century melodrama, there might be some surprises in store….

If you want to give the story a try, you can read both books online or download them in popular eBook formats by using the links above.