Golden Days for Boys and Girls was a weekly children story paper published from March 6, 1880 through May 11, 1907. The paper was produced in Philadelphia by James Elverson (originally intended as a companion to his adult story paper: Saturday Night—also available in our Digital Library) but circulated widely from coast to coast. 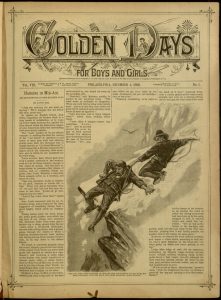 Daly was a student at Villanova from 1880 to 1887. Daly went on to have a prolific career publishing many books of his dialectic poetry. But before he was a renowned author, he submitted original “puzzle poems” to Golden Days for Boys and Girls under the pseudonym Villa Nova. Today, Villanova holds issues of Golden Days from 1887 containing Daly’s puzzle poems, as well as his personal notebooks where he crafted the cryptic poetry. 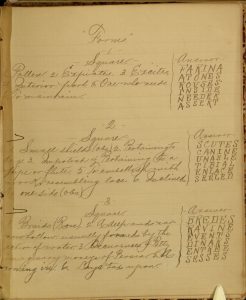 Puzzle poems combine logic puzzles with poetic language, requiring an aptitude for English and mathematics to both create and solve the riddle. Types of puzzle poems featured in Golden Days include numericals, charades, anagrams, enigmas, and forms (such as pentagon, square, diamond, inverted pyramid, etc.) Finding the solution to puzzle poems typically involve rhyming riddles where words have more than one meaning, clues that hint at the answer, and rearranging letters of a given word or phrase. 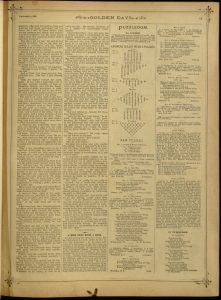 Golden Days for Boys and Girls solicited reader submissions of puzzle poems with the following call in each weekly issue:

Original contributions solicited from all. Puzzles containing obsolete words will be received. Write contributions on one side of the paper, and apart from all communications. Address “Puzzle Editor,” Golden Days, Philadelphia, PA.

The Falvey Distinctive Collections and Digital Engagement staff will be producing a Spare Change podcast episode on Golden Days puzzle poems to complement the spring exhibit “Poetic License”, coming to Falvey Library next month. Solutions to a selection of Daly’s puzzle poems will be featured in next week’s blog post.