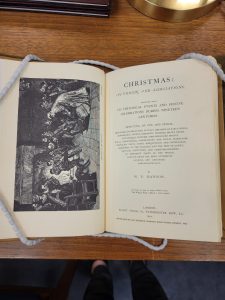 Christmas: Its Origin and Associations; Bringing in the Yule Log.

For the month of December the blog will be featuring holiday themed materials from Falvey’s Distinctive Collections.

Christmas: Its Origin and Associations, Its Historical Events and Festive Celebrations During Nineteen Centuries is written by W. F. Dawson and first published in 1902. The long title describes the contents spanning 1900 years of Christmas traditions from all over the world. The chronological chapters are illustrated by reprints of pen and pencil drawings of holiday festivities and traditions, spanning the Origin and Associations of Christmas to Modern Christmases at Home and Abroad. 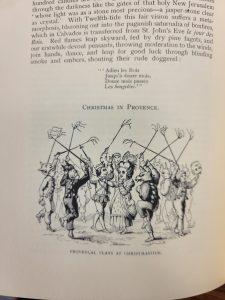 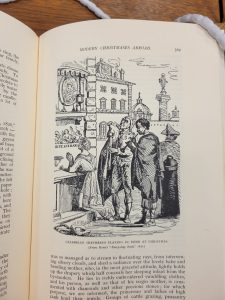 “At home, at sea, in many distant lands, This Kingly Feast without a rival stands !” 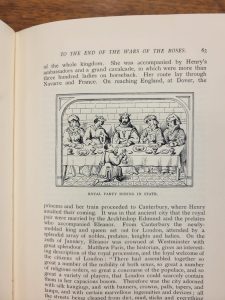 Royal Party Dining in State. Christmas to the End of the Wars of the Roses.

Home for Dawson meant turn of the century England, and his history of Christmas is indeed centered around royal traditions of the English crown. Politics frequently influenced the national holiday traditions of England. One such example is the practice of decorating the Christmas Tree. First popularized in England by Prince Albert, the husband of Queen Victoria, who brought this tradition from his homeland of Germany as a way to incorporate his own culture of celebrating Christmas.

How is Christmas celebrated around the world today?

Take a glimpse into the diverse cultural practices of the Christmas season from countries around the globe: https://www.whychristmas.com/cultures/