Flick or Flip: The Graduate

Welcome to Falvey’s Flick or Flip? blog series. My name is Anna Jankowski, and I am a Senior Communication and Marketing Assistant at Falvey Library. I am continuing to publish editions of this blog after my good friend Allie Reczek graduated last year. For this series, I will pick a book (flip) that has been turned into a movie (flick) and argue which I thought was better.

For my first Flick or Flip post, I read The Graduate (1963) and watched the 1967 Oscar-winning film starring Dustin Hoffman. I was very excited to dive into this story as I have often heard it referenced in popular culture but never knew why it was such a phenomenon. I also thought it was very timely to my own life as I will be graduating from Villanova in a few short months.

The story follows young Benjamin Braddock, who has just graduated at the top of his class and will be turning 21 in a few years. His two affluent parents throw him a party for his graduation to show off their talented and accomplished son. Benjamin is distracted at the party as he feels all of his accomplishments are 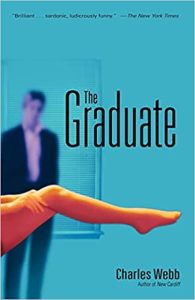 meaningless in the grand scheme of life and contemplates what he wants to pursue in the future. At this party, he drives the mercurial Mrs. Robinson home where she attempts to seduce him before her husband arrives. Thus, an affair between this older woman and young Benjamin begins. However, their affair abruptly ends and chaos ensues after Benjamin becomes enamored with Mrs. Robinson’s college-aged daughter, Elaine Robinson.

The book is mostly dialogue with very little context given around the emotions of the characters. It moves quickly and states the actions in a matter-of-fact manner.

The film is quirky, engaging, and disorienting at times. It uses intricate long shots and unique framing to create the scattered world that Benjamin occupies. Most of the movie is silent except for the repetition of Simon and Garfunkel’s The Sound of Silence which plays several times throughout several intricate montages of the film.

Both the book and the movie are relatively uncomfortable to experience. Benjamin is a very difficult protagonist to root for because of his lack of drive and complete disregard for others in his life. It is a great commentary on finding our way. 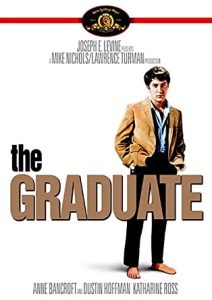 The endings of the book and the movie are slightly different but in very critical ways. There are some interactions and nuances in the relationships between the characters that are altered or completely omitted from the film which was slightly disappointing. The final sequence and final shot of the movie is an iconic moment in film history that is referenced frequently in popular culture. The emotions on the character’s faces convey so much hesitation, adrenaline, confusion, hope, and despair in only a matter of minutes. There is so much we can infer about how they feel about the decisions they have just made based on their eye contact and dialogue or lack thereof. For this reason, as well as several other stunning scenes designed by director Mike Nichols, I recommend…

If you are interested in this visual masterpiece with a bit of a disturbing plotline, the movie is available for rent as a DVD in Falvey Library. We currently have portable DVD players that can be borrowed for a classic movie night! So pop some popcorn, sit down with friends, and get ready to watch this misty classic film about life, love, and searching for your purpose. 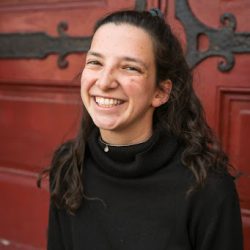 Anna Jankowski ’23 CLAS is a senior Communication Major. She works  as a Communication and Marketing Assistant at Falvey Library.