In honor of Native American heritage month I will be highlighting materials in our Distinctive Collections relating to Indigenous peoples and experiences.

The Snow People (1973) is a self-published, firsthand account of Marie Herbert’s experience living among the Inuit people for one year with her explorer husband, Wally Herbert, and their young child. Wally Herbert specialized in exploring lands considered the most remote and uncharted by Europeans. 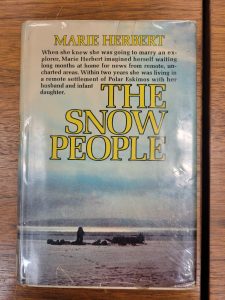 Wally’s goal in living among the indigenous people of northwest Greenland was to document their “vanishing culture”. Rather than record their lives via film or other technology-based documentary methods, the Herbert family attempted to assimilate with the Inuit people. Marie, Wally, and their ten-month old baby lived in a hut on a settlement located 90 miles north of a U.S. airbase, isolated by a frozen sea. 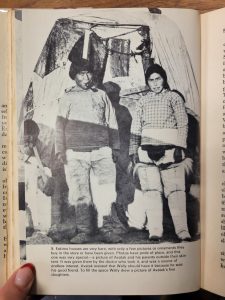 The Herbert’s did however take personal photos of their time with the Inuit.

In her book, Marie Herbert recounts the domestic experience of living as an Inuit woman. She learned skills such as how to collect ice for fresh water, skin a fox, make sealskin shoes and polar-bear pants, guide a sledge through hazardous rocks and ice, net migrating birds, make dog harnesses, and more! Marie’s daughter Kari learned to speak the local Inuit language before she could speak English. 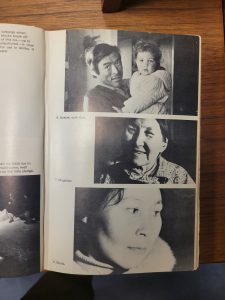 This and other arctic Distinctive Collections materials are part of the Jamie Wheeler Collection recently acquired by Falvey.

What to learn more about this new collection?