This week’s pick is “The Rescue,” a poem by Horace F. Tussey

In honor of Native American Heritage month I will be highlighting materials in our Distinctive Collections relating to Indigenous peoples and experiences.

“The Rescue” tells the story of the capture and rescue of Olive Oatman from the perspective of Captain William F. Drannan who was aided by Nawassa, a young Apache woman who risked her life to help return Oatman to her people. Tussey includes photographs and personal illustrations throughout the manuscript, and compares the bravery of Nawassa to that of Pocahontas and Sacagawea. 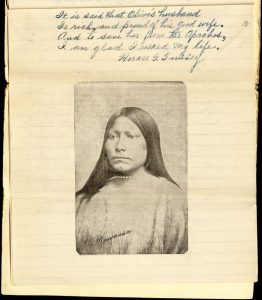 Photograph of a Native American with the name Nawassa written across it.

This and other poems by Horace F. Tussey (Sapulpa Oklahoma, a. 1910-1920) are available in our Digital Library’s Americana Collection. Tussey wrote about frontier life in the late 19th and early 20th centuries. Drawing on urban legend and personal experiences, Tussey illuminates the famous historical tales as well as the mundane daily life of the Wild West in his unique poetic prose.

Pennsylvania is one of the few states that does not recognize an Indigenous tribe within its borders, despite the rich Indigenous cultural heritage across the occupied land. To get acquainted with the Indigenous communities of Pennsylvania and the world, check out this interactive map!