On Sunday, Sept. 25, I attended the 2 p.m. showing of Villanova Theatre’s 2022-2023 season opener Men on Boats in the John and Joan Mullen Center for the Performing Arts. The show ran for approximately 90 minutes and included a post-performance talk-back with the Director, Kristy Dodson; the Production Dramaturg, Hannah Deprey-Severance; and Melinda Daniels, PhD, a research scientist at the Stroud Water Research Center who specializes in fluvial geomorphology, hydrology, and river ecosystem ecology. The talk-back reflected on both the impressive successes and the devastating impacts of Powell’s expedition and revealed insights on the creative process behind the production. 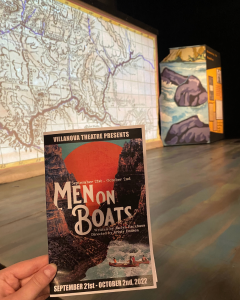 Men on Boats, written by living playwright Jaclyn Backhaus, is a historical satire of the real-life 1869 Grand Canyon Colorado River expedition of John Wesley Powell and his rag-tag crew. Adapting historical records into a script and portraying an excursion that only included cisgender, heterosexual white men, Backhaus created a satire that could succinctly depict an important historical event to audiences across the country while poking fun at the men who set sail in 1869 (and maybe even more modern figures).

As Dramaturg Hannah Deprey-Severance emphasized in the talk-back, Backhaus’s vision was to find a cast of performers that included everyone but cis-het white men. Villanova’s production stayed true to this vision and featured a diverse cast of talented non-male performers who brought the minimalistic yet beautiful set (created by Stefanie Hansen) to life.

Taylor Molt as Bradley (in particular), Reagan Venturi as John Colton Sumner, Genevieve “Eve” Windbiel as Hawkins, and Sara Buscaglia as Hall provided hilarity to the show and all kept me laughing out loud for the 90-minute duration. The brothers, often mistaken for twins (a joke Victorious fans will appreciate) O.G. Howland, played by Noelle Diane Johnson, and Seneca Howland, played by Abigail Little, portrayed a comedic yet compelling sibling relationship on stage. The tense and complicated friendship depicted by Alison Hyde Pascale as John Wesley Powell and Olivia “Liv” Morgan as William Dunn was grounded and gripping. Old Shady, performed by Crys Clemente, served as the crew’s resident slightly odd lone-wolf, who, of course, always had a song for every situation. Finally, Teya Juarez gave a truly endearing portrayal of Frank Goodman (with a seemingly well-practiced British accent).

More information about Men on Boats:

If you want more information on the performers and creative team who made this production possible, check out the online Playbill.

If you want a brief synopsis of Powell’s expedition and other key context for the show, check out the Educational Guide.

If you want to learn more about John Wesley Powell, check out Aton’s biography of Powell available online through Falvey (of course).