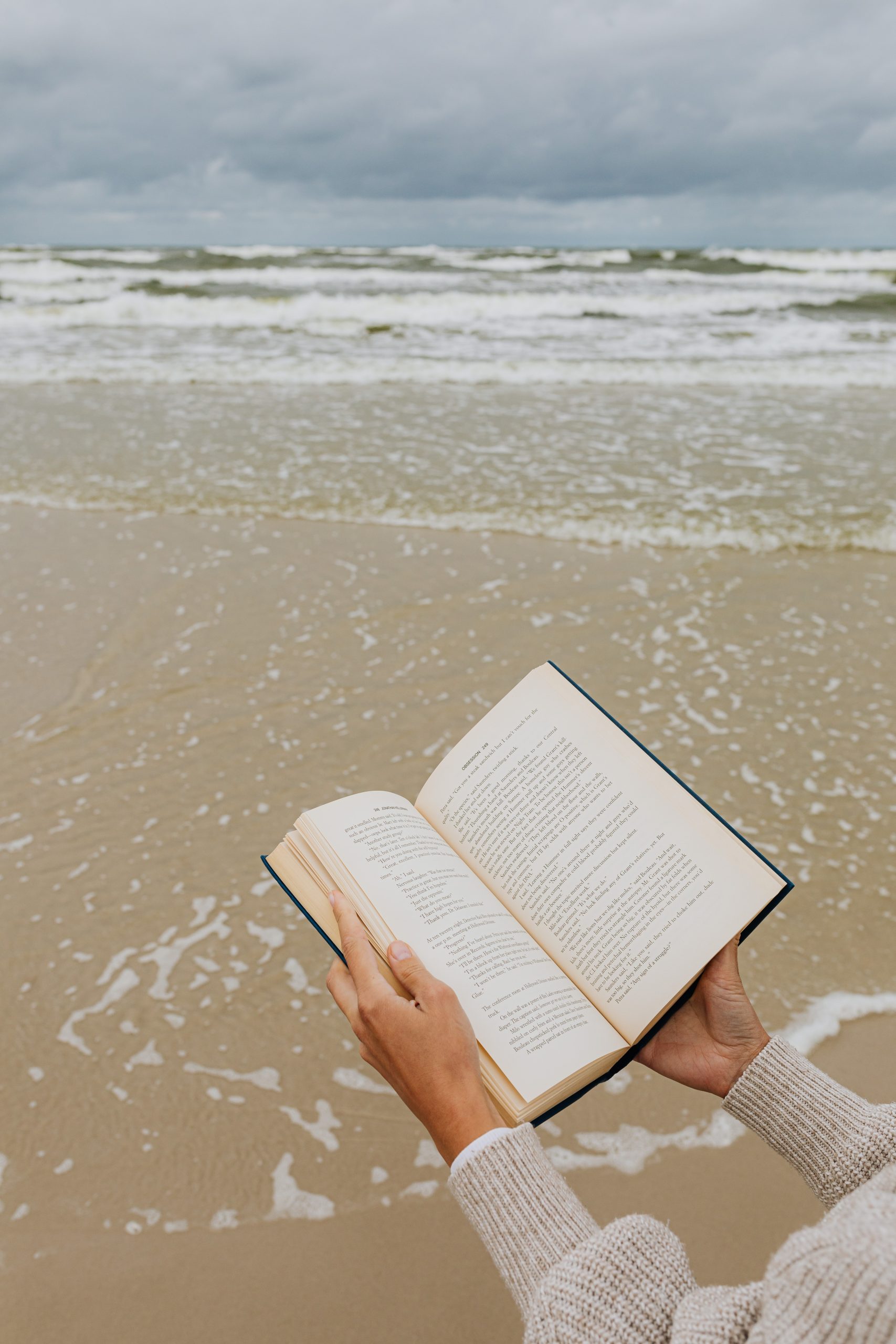 The cat is back! After a nearly four-month hiatus, I’m excited to return to Falvey’s stacks for another year.

I’m currently mourning the end of a recent beach vacation, so I’m yearning for scenes similar to the photo above more than ever right now. That being said, in part because I don’t want to accept the fact that our break is over, I’ve decided to begin the semester with a brief recap of a few books I read this summer…

I always find myself reading a lot of classic literature, both because I enjoy it and feel like I’m obligated to as an English student. However, this usually leaves me out of the loop of the best contemporary authors simply because I don’t read the latest novels. Thanks to the recommendation of my roommate, who is a much more avid consumer of recently published novels than I am, I decided to read The Seven Husbands of Evelyn Hugo, something I otherwise would not have gravitated towards on my own. This decision is certainly one I don’t regret.

The story of Evelyn Hugo is told through an interview with Monique Grant, an upcoming journalist who is surprised to learn that she scored an exclusive interview with someone as famous as Evelyn. As the story progresses, readers learn that Evelyn’s story is more closely tied to Monique’s than expected, but the reason why Evelyn chose Monique to tell her life story is something no one expects.

By far the most captivating sequences of the story are the descriptions of Evelyn’s life as a rising movie star and scandalous marriages to seven different men. Luckily, these sections make up a majority of the novel, and they all search for an answer to the question, “Who is the love of Evelyn’s life?”

The author of this novel, Taylor Jenkins Reid, is also the author of several other incredibly popular books such as Daisy Jones and the Six and Malibu Rising.

I returned to my old ways with E.M. Forster’s classic novel A Room with a View. Having been published in 1908, this text takes place in the refined and restrained early 20th century Edwardian Era in England. However, much of the novel takes place during a trip to Italy, making it a great vacation read.

Baedeker in hand, Lucy Honeychurch leaves England to explore Italian art and culture. Before long, she develops complicated and unnerving feelings for a young man named George Emerson, who is of a different upbringing than herself. Throughout the novel, Lucy grapples with her feelings for George and is forced to confront them with greater stakes upon her return home.

I enjoyed this story’s descriptions of scenic destinations in Italy. It made for an entertaining summer read that encouraged me to travel and take on new experiences. I’m just glad I don’t have to deal with spontaneous marriage proposals and keeping up with laborious etiquette during my travels like Lucy does.

This incredible piece of scholarship by Robert Crawford was endlessly informative, and I had a wonderful time reading it, but I will definitely add a disclaimer to it. The book may be a bit too academic for a casual read, so if you’re not a nerd for modernist literature like myself, I’d exercise caution before attempting to conquer this text.

If you do want to learn anything and everything about Thomas Stearns Eliot, this book is for you. One of Crawford’s goals in writing this text was to fill a knowledge gap that has plagued Eliot scholars for years. The main issue is that there is much more material on T.S. Eliot from after 1922 when he published The Waste Land than there is from before. Once this canonical poem launched Eliot to literary stardom, publishers were much more willing to publish his work, leading to there being a lot more material on Eliot after 1922.

Crawford endeavors to overcome this hurdle by providing an in-depth analysis of Eliot’s life from his birth in St. Louis, Mo., until the publication of The Waste Land. Perhaps the most helpful part of this book is the plethora of material Crawford provides that Eliot himself read early in life. Eliot is known as one of the most educated and well-read poets of his time, so for someone interested in studying the texts that made Eliot who he is, this biography is a goldmine.

Thanks to Michael Foight, the Director of Distinctive Collections and Digital Engagement, it has also been brought to my attention that the second part of this wonderful biography, Eliot After “The Waste Land,” was recently published. Although I can’t say I’ve read it myself, if it’s anything like its predecessor, it’s certainly worth checking out!