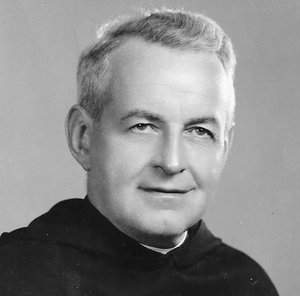 Happy birthday to Father Falvey, for whom Villanova’s Library is named.

“In 1963, the Villanova University Library was named and rededicated in honor of the late the Rev. Daniel P. Falvey, OSA, who had devoted nearly half his life to the library. Father Falvey was born in 1906 in Holyoke, Mass. He entered the Augustinian Order in 1928 and received his A.B. from Villanova in 1931. He was ordained in Washington, D. C., in 1934, and did graduate work at George Washington University. In 1940, he received his master’s degree in Library Science from Columbia University and, in 1958, a Doctor of Library Science from St. Francis College, Loretto, Pa.

“In 1935, Father Falvey was appointed Assistant Librarian at Villanova. He served in this capacity for five years and then in 1940 became Librarian. When the new library was erected after the war, Father Falvey devoted himself to the project in order to make the building as modern and as functional as any library in the country. He organized the “Friends of Villanova Library” committee which was made up of friends and alumni of the University. The purpose of the committee was to raise funds for the new structure. Father Falvey, working with the committee, succeeded in raising nearly a million dollars. But Father Falvey did not concern himself solely with the physical aspects of financing, building and maintaining a library. He was also dedicated to creating a scholarly atmosphere for all members of the academic community. One of his contributions was his inauguration of the Catholic Publications which meets annually at the University.

“In addition to his qualifications as organizer and innovator, his personal qualities of perseverance and dedication, humility, and generosity of spirit endeared him to all who knew him.

“Until his death in 1962, Father Falvey was planning improvement for the Library and constantly adding new materials, to keep it as complete and up-to-date as possible.

“The new addition to the library sustains the long-range planning that Father Falvey made a tradition at Villanova. It was fitting, therefore, that the library bears his name to commemorate his years of service.”