Green Voices of the Past: Joseph McGarrity and the 1939 British Royal Visit to the United States

Beginning on June 07, 1939 King George VI, and his wife Queen Elizabeth embarked on the first royal visit to the United States that would endure until June 12, 1939. Joseph McGarrity’s 1939 diary offers intriguing insight into the visit through the lens of an American Irish Republican. 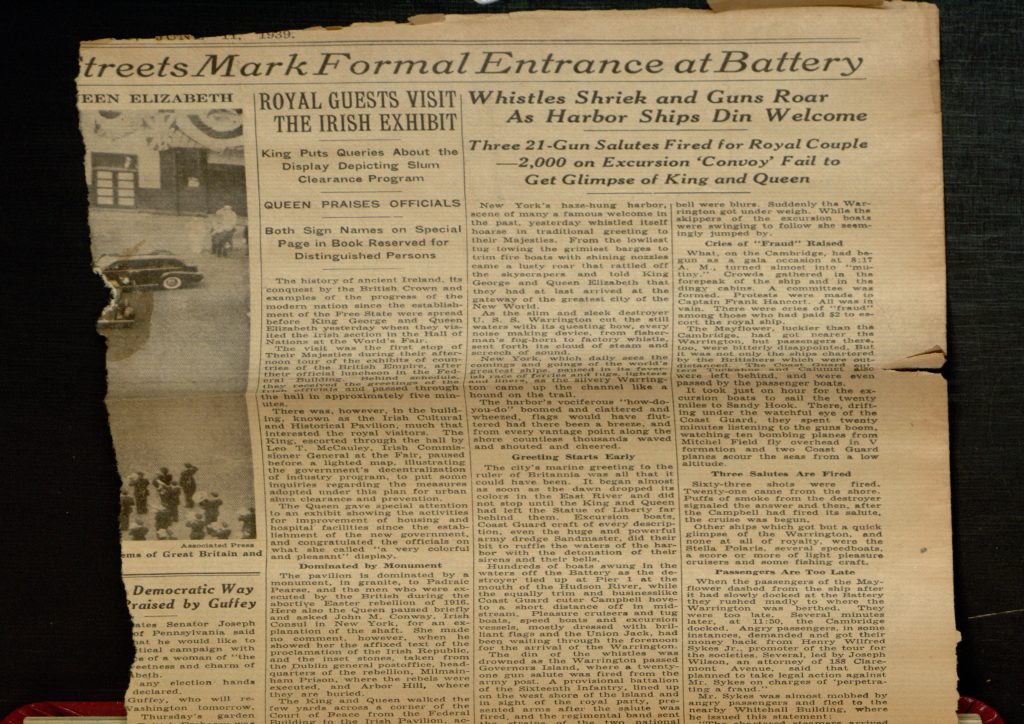 Preceding the advent of the tour, there was much controversy surrounding the mere possibility of the tour, and the newspaper clippings included in McGarrity’s diary offer immense evidence of this. As a newspaper article titled “Britain Fears War” alluded to, many people were questioning in April 1939 if King George VI and Queen Elizabeth should be allowed to go on the visit at all because of the rising fears of an imminent breakout of international war (p. 15, clipping 4). There was a clear division of opinion within both the British cabinet as well as within the royal household; further, this primarily was due to the concern that if war broke out while the British royals were in the United States, the British government feared if they could return home from the tour (p. 15, clipping 4).

Despite these concerns, the tour went ahead, and the first traces of the decision for the tour to go ahead, is evident through the eyes of Joseph McGarrity in his 1939 diary. For, on May 23, 1939, McGarrity wrote “the King + Queen are to visit the President at Washington what Gall they have (p. 50). From this clear disdain, it is clear that McGarrity found the royal visit to not only inappropriate, but also inflammatory with the Irish question still looming large. With his characteristic vitriol towards Britain and the British empire, McGarrity chronicles what he considers to be the most important aspects of the royal visit in his diary.

The royal visit was inflammatory to McGarrity’s immense hatred toward the British monarchy, and his reaction to King George VI and Queen Elizabeth’s visit to the Irish exhibit at the 1939 New York World’s Fair. In the newspaper clipping, found in McGarrity’s diary, entitled “Royal Guests Visit the Irish Exhibit” King George VI and Queen Elizabeth are depicted as maintaining respectfulness and politeness while perusing the exhibit. As the “Queen gave special attention to an exhibit showing the activities for improvement of housing and hospital facilities,” and she commented that the exhibit was “very colorful and pleasant” (p. 93, clipping back). Furthermore, this was the first stop of the royal visit, and according to McGarrity the royal walk at the World’s Fair demonstrated that the visit represented “Fake freedom” and “Fake Patriots” on the part of the American government for entertaining the British royals (p. 92). McGarrity inherently thought that the United States should not entertain the British royals, as they represented a country maintaining a hold on a country searching for freedom. Evidence of this is apparent with McGarrity maintaining “gradually we have pulled the veil from the Faik [sic] Freedom that Ireland is supposed to Have and leave Her masked as still the Pawn of England (p. 92). For McGarrity believed that Roosevelt should side with the Irish, and support an independence movement that he equated with the American revolution. 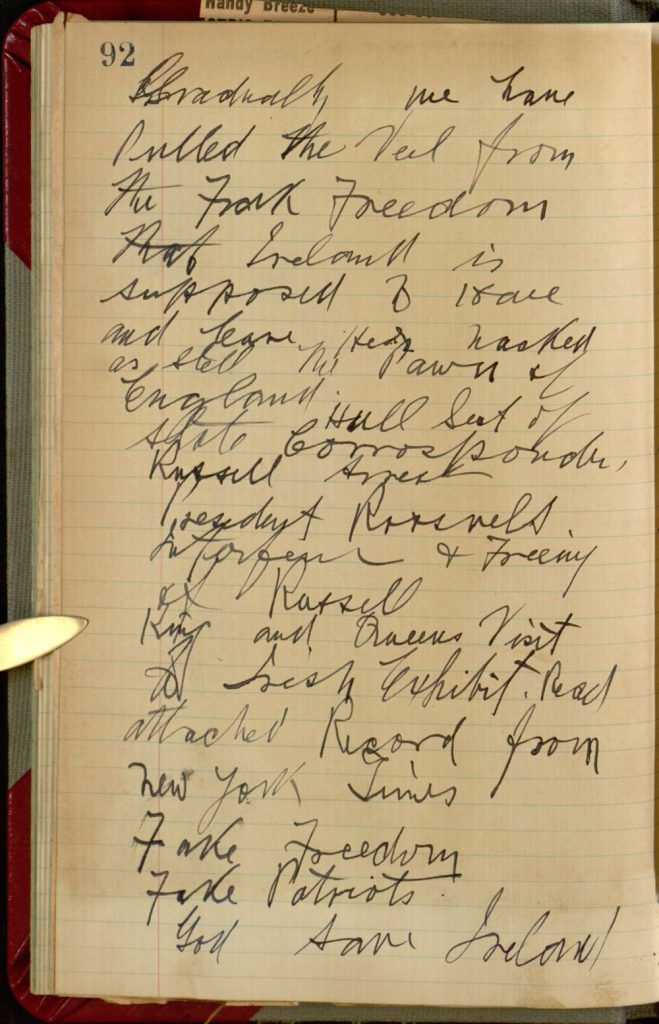 Further, it is clear that the Irish exhibit at the 1939 New York World’s Fair was a key part of the royal visit. As the reactions of King George VI and Queen Elizabeth are covered in intricate detail. For instance the reporter wrote, “the Queen paused briefly and asked John M. Conway…for an explanation…She made no comment, however, when he showed her the affixed text of the proclamation of the Irish Republic” (p. 93, clipping back). From the brief description of the Queen’s reaction to symbolism concerning Irish republicanism, it is clear that she was aware that the visit had potential to stir up emotions and criticism. Further, all descriptions of the king and queen on the visit to the Irish exhibit allude to a carefully staged, and self-monitored experience for the royals.

As a whole, McGarrity’s short inclusion of the 1939 royal visit offers a deeper understanding of McGarrity, as understanding what angered him hints at what he found most important. This episode in McGarrity’s diary demonstrates his deep criticism of not only Roosevelt, but also the actions and intentions of the royal family as well. For an Irish American, and Irish republican, McGarrity viewed the first visit of the royal family to the United States with deep suspicion of the intentions of the British for visiting, but also with deep fury.