Green Voices of the Past: Franklin D. Roosevelt through the Eyes of Joseph McGarrity

From September 1938 to December 1939, Joseph McGarrity kept a number of diaries; however, this particular diary is in an old “Composition” notebook. Despite its humble appearance, this diary provides a riveting glimpse into the machinations of McGarrity concerning the onset of World War II, and McGarrity’s perceptions of the most prolific politicians of that period. Touched upon most in this particular diary, are McGarrity’s thoughts surrounding President Franklin D. Roosevelt’s visitors, and policies at the onset of World War II. 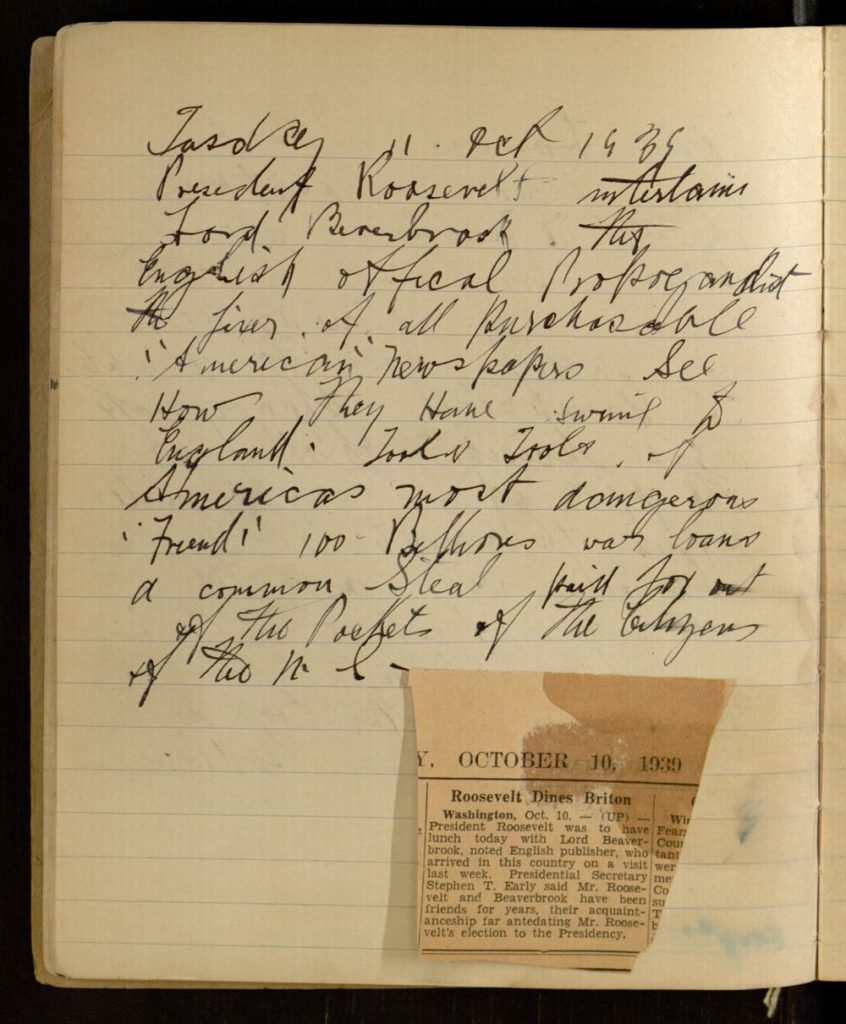 For McGarrity, Roosevelt was an obstacle standing in the way of American support for a fully united and independent Ireland. Because of this, much of McGarrity’s rhetoric concerning Roosevelt is not only skeptical, but at times McGarrity’s rhetoric becomes vitriolic. Attracting the most scorn from McGarrity was Roosevelt’s meeting with Max Aitken, 1st Baron Beaverbrook, whom McGarrity refers to as “Lord Beverbrook [sic]” (p. 20). To McGarrity, “Lord Beverbrook [sic]” is an “English official propagandist,” as he purchased quite a few American newspapers and McGarrity believed that the papers became too geared towards supporting England soon after (p. 20). Inherently, this is problematic for McGarrity, as it represented a turn for him towards a more sympathetic view of the British. In this regard, McGarrity describes Aitken’s role in the American press as one of the “tools of Americas [sic] most daingerous [sic] ‘Friend.” Because Roosevelt dined with Aitken, McGarrity viewed him as being too close and too willing to work with the British. This view is evident, as McGarrity viewed Roosevelt’s dinner with Aitken, as Roosevelt aligning the United States too closely with the United Kingdom. Inherently this was a major issue for McGarrity, as he, as an Irish republican, saw England as an imperial aggressor that was keeping Ireland from unification and independence. Most vitriolic in his assessment of Roosevelt, McGarrity on page 21 questions “will we ever get another such President as Washington who warned us for all future time aginst [sic] foreign entanglements,” and more pertinently McGarrity wondered “How can the United States prosper all the time on the auction block for England to buy” (p. 21). From this, McGarrity was not only questioning the efficacy of the United States catering to England when they were claiming to be neutral, but also was highly skeptical of Roosevelt’s integrity when it came to U.S. foreign policy. Moreover, McGarrity did not view Roosevelt as forming his policies on his own accord, instead McGarrity viewed Roosevelt as a puppet of the English government.

In equating Roosevelt with England’s war objectives, McGarrity often portrayed Roosevelt as lacking agency, and merely a tool utilized by England. Most clearly McGarrity does this by alluding to a “Roosevelt Promise,” or Roosevelt ignoring neutrality to work directly with England. With this rhetoric in mind, McGarrity on page 24 directly states “I wonder if England has a Roosevelt Promise to put America in the war on Her side?” (p. 24). In equating Roosevelt with McGarrity’s enemy, England, McGarrity does show partiality towards the Axis powers, and often times show outright support for Adolf Hitler, Benito Mussolini, and Joseph Stalin. In doing so, McGarrity on page 24 details that “Hitler and Stalin I hope are very buisy [sic] preparing”. 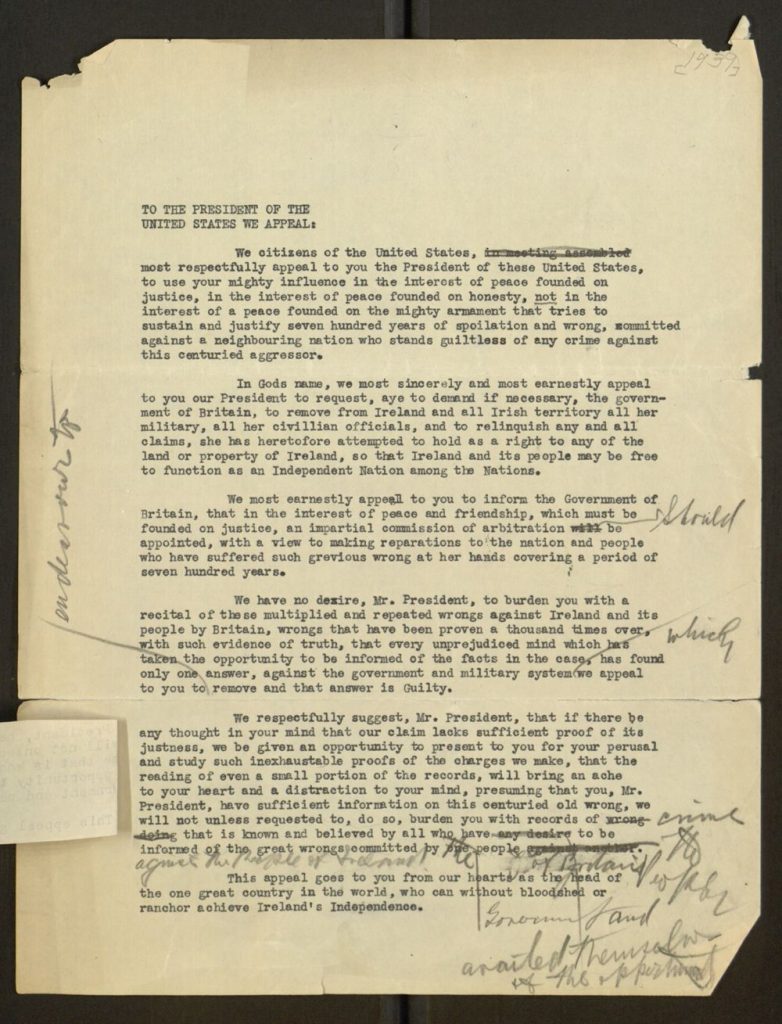 McGarrity’s machinations about Roosevelt, and other key figures of the World War II era are important, as they demonstrate the way that McGarrity was understanding the events that were happening in the world around him. Further, these ideas surrounding Roosevelt represent a concerted shift from the way that McGarrity perceived Roosevelt in 1936, as in McGarrity’s 1936 diary, McGarrity wrote “I thank and I pray that Roosevelt gets elected a man of great Heart and courage + Brain” (p. 47)). By further exploring these diaries, one will be able to discern when, and why, McGarrity’s perception of Roosevelt changed, and what key factors pushed McGarrity from staunch support to strong dislike.