Cat in the Stax: Sci-Fi at Falvey 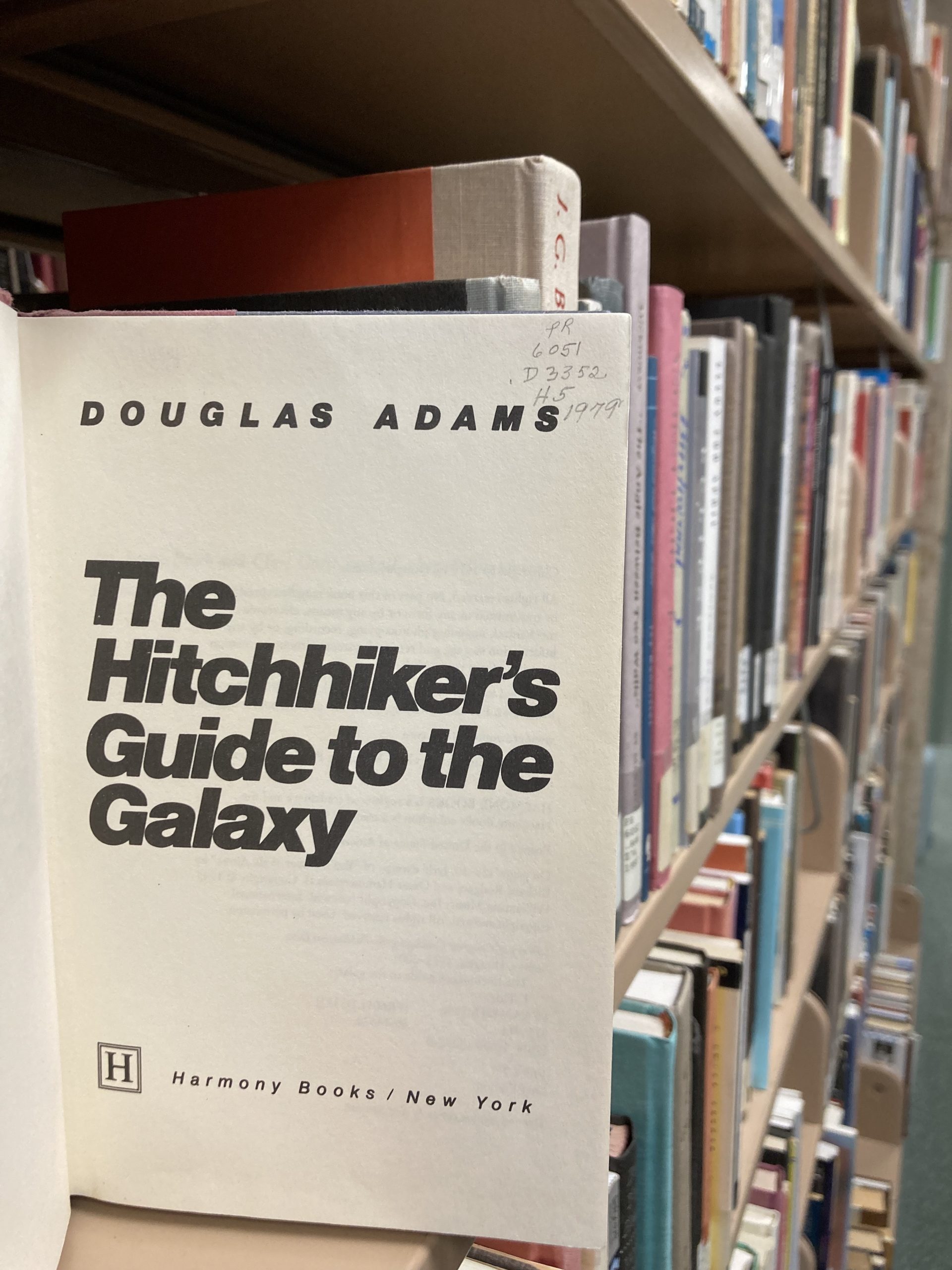 To celebrate the recent release of the long-awaited cinematic adaption of Frank Herbert’s classic science fiction novel, Dune, for this week’s installment of “Cat in the Stax”, I’m going to talk about some sci-fi books you can pick up at Falvey. Sci-fi is one of my favorite genres to both read and watch on the big screen, so with that in mind, here are a few classic books I think you should check out!

The Hitchhiker’s Guide to the Galaxy

This lighthearted story of space travel by Douglas Adams was one of the first science fiction novels I read, and I couldn’t have asked for a better introduction to the genre. Just before Earth is destroyed to make room for a hyperspace expressway, Arthur Dent and Ford Prefect hitch a ride on the nearest spaceship to escape their doomed planet.

Whether you’re looking to meet the President of the Galaxy or searching for the answer to the “Ultimate Question to Life, the Universe, and Everything”, this book has something for you. This particular text is the first installment to a six-part series, so if you enjoy reading it, there’s plenty more fun to be had.

The War of the Worlds

H.G. Wells, a pioneer of the science fiction genre, first serialized this story in 1897. This means the text was released in parts, which was common for the time, and each section would often end on a cliffhanger. A year later, after the entire story had been released gradually, The War of the Worlds was published in its entirety and has been available as a cohesive text ever since.

You just can’t get any more quintessential than this story of mysterious invaders from space attacking Earth! I’d also recommend checking out some other renowned stories by Wells such as The Time Machine and The Invisible Man.

A Wrinkle in Time

Madeleine L’Engle’s novel, A Wrinkle in Time, is an example of a writer being rewarded for persistence. Her story was rejected about 30 times before a publisher finally decided to accept it. Although this book definitely can appeal to kids, you don’t have to be a teen to enjoy reading it.

If you’re strapped for time, this story was recently adapted to the screen in 2018 and features stars such as Oprah Winfrey and Reese Witherspoon. Anyone with a Disney+ subscription can stream the movie now. Also, to learn a bit more about Madeleine L’Engle, give this blog a read!