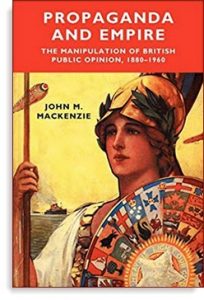 Villanova University faculty, students, and staff now have electronic access to all volumes in the acclaimed Studies in Imperialism series published by Manchester University Press. For close to forty years the series has retained its relevance in academic circles by steadily expanding its cross-disciplinary scope. John M. MacKenzie, the founding editor of the series and an occasional contributor, explored the cross-fertilization or, as some would argue, the cross-contamination between the usurper and the usurped in Propaganda and Empire (1984), the first volume in the series. The series’ continued success reflects the pervasive and persistent bonds between metropolis and periphery in the post-colonial period.

As general editor, MacKenzie has promoted cross-disciplinary research in imperial studies through his research and editorial work for more than thirty years. In Propaganda and Empire MacKenzie explored the impact of imperialism on British popular culture. As the editor of the following volume, Imperialism and Popular Culture (1986), he invited other scholars to further explore the same topic. During his tenure as general editor, MacKenzie continued to push Studies in Imperialism into new directions. Examples include his foray into environmental history with The Empire of Nature, which appeared in 1988, followed by Imperialism and the Natural World (1990), a collection of essays edited by MacKenzie. His Museums and Empire (2009) introduced museum studies to the series. Later volumes on imperial museums and exhibitions include Exhibiting the Empire (2015), a collection of essays edited by MacKenzie that explored the domestically promoted imperial narrative, and Curating Empire (2012), a collection of essays edited by Sarah Longair and John McAleer.

The Library’s catalog includes records for all available print and electronic editions of individual volumes in the series. Access to the complete series is also available via the Library’s Databases A-Z list under S.

Learn more about Studies in Imperialism