Green Voices of the Past: The Irish American Club and the Second Boer War

Lasting from October 11, 1899 to May 31, 1902, the Second Boer War was a conflict between the United Kingdom and the two independent Boer states, the Orange Free State and the South African Republic. Other names for the war include, the Boer War, the Anglo-Boer War, and the South-African War. However, the war erupted following the discovery of both gold and diamonds in the Boer states, and with the question of who would control the Witwatersrand gold mines. In the early phases of the war, Boer attacks proved successful against the British; however, after initial success British reinforcements reversed those successes. Despite this, the war continued for several years, as the Boer forces utilized guerilla warfare against the British. The guerilla warfare tactics of the Boer states were counteracted with a scorched earth policy on the part of the British that brought the war to an end. With the Treaty of Vereeniging, which was signed on May 31, 1902, the Second Boer War came to an end. As a result, the South African Republic and the Orange Free State were no longer independent republics and were incorporated into the British empire. 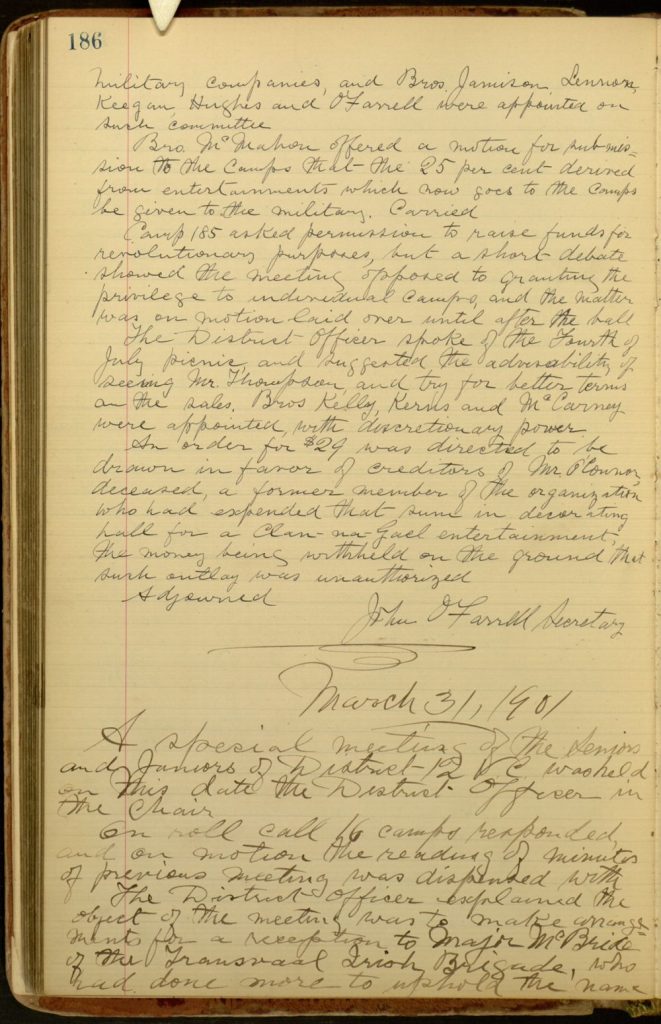 Initially in the minute book, the Second Boer War appears as a way to support a war against British imperialism. As the months went by in the meeting book, “pro-Boer sentiment and meetings continued to occur, and culminated on page 184 when the organization discussed whether or not take action to protest the war. The organization expressed this by questioning “the advisability of District 12 taking action along the lines suggested by Mr. Van Ness of New York, protesting against the sale of horses to the British Government for us in South Africa against the Boer Republic.”

Further, the organization took great pride in a visit from Major John MacBride, spelled in the minute book as “McBride.” For, it is stated in the minute book on pages 186 and 187, “the object of the meeting was to make arrangements for a reception to Major McBride of the Transvaal Irish Brigade, who had done more to uphold the name of the Irish race than any other man during the past century.” John MacBride was an Irish leader and supporter of the Irish Republican movements. Moreover, MacBride was instrumental to Irish involvement in the Second Boer War, as he was responsible for the organization of the Transvaal Irish Brigade. The Transvaal Irish Brigade, also known as the Irish Transvaal Brigade, or the “Wreckers Corps,” consisted of Irish and Irish-American miners who lived in Transvaal and were willing to fight against the British forces in the Second Boer War. Furthermore, the Transvaal Irish Brigade operated from September 1899 to September 1900, and participated in approximately twenty engagements. In those twenty engagements, eighteen men were killed and seventy were wounded. 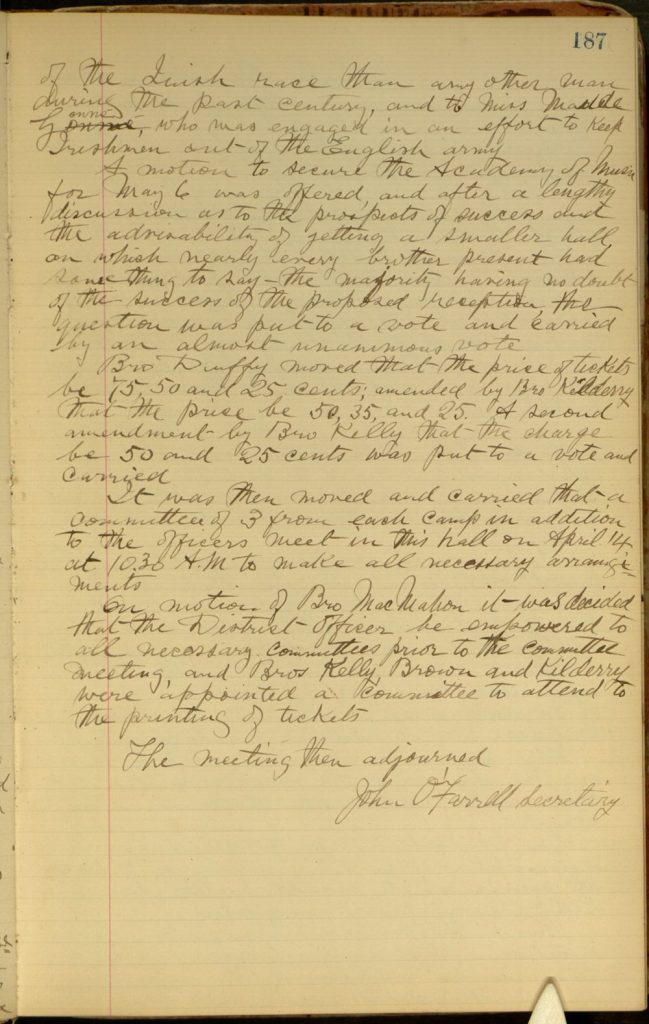