Falvey Library recently expanded its Irish newspaper holdings with assistance from the Irish Studies program and the College of Liberal Arts & Sciences. The newly acquired Radical Newspapers collection from Irish Newspaper Archives includes more than 100 Irish newspapers, bulletins, and pamphlets, mostly from the late 19th and early 20th centuries. The collection consists of digital copies of a broad range of nationalist, republican, and socialist publications. It offers rich contemporary commentary on Ireland’s War of Independence (1919-1921) and many other topics.

The United Irishman, Sinn Fein Daily, The Irish Worker, and The Workers’ Republic are some of the better-known newspapers in the collection. The United Irishman was an Irish nationalist weekly published from 1899 to 1906. Irish leaders such as Pádraig Pearse, Maud Gonne, and Roger Casement regularly contributed to the paper. The paper ceased publication after only seven years following a libel suit. The same year it was re-started under the new name Sinn Féin, under which it was published until 1914 when it was suppressed by the British government. The Irish Worker was founded in 1911 by James Larkin, an Irish trade union leader. It was also suppressed by the British government in 1914. The Workers’ Republic was the official organ of the Socialist Party of Ireland. Its first issue was printed in 1898 under the aegis of James Connolly, another Irish trade union leader and the founder of the Irish Socialist Republican Party. Connolly emigrated to the U.S. in 1903, where he worked for a few years as the editor of the Free Press, a newspaper out of New Castle, Pa. He returned to Ireland in 1910 as organizer of the Socialist Party of Ireland. Many of his contributions to The Workers’ Republic and other papers have been transcribed for the Marxist Internet Archive.

Many of the publications in the collection were ephemeral in nature and, in some cases, only a handful of issues have been preserved. For example, the Radical Newspaper archive only includes a single issue of The Woman Worker (An Bhean Oibre), a short-lived newspaper published by the Irish Women Workers’ Union from 1926 to 1928. Helpful publication histories for individual titles in the collection are available elsewhere on the publisher’s website.

Irish Newspapers Archive has created a short tutorial that introduces available search features. Search facets include date range, publication title, and document type. The search bar features Boolean operators to combine search terms. Search results can be refined in various ways but beware the byline facet as many articles do not carry a byline and results are unreliable. The digital archive is easy to navigate from search results to article and/or page display. Individual articles can be clipped and downloaded or saved to a personal collection. Access the Radical Newspapers archive via the Library’s Databases A-Z list under “R”. 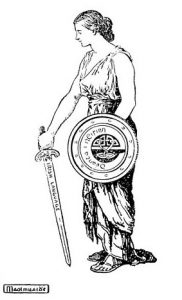 Related resources in the Falvey collections: