Green Voice of the Past: Women in the Patrick H. Pearse Branch of the Friends of Irish Freedom

Often underrepresented in the historical record, women’s voices and experiences offer an important lens through which to view history and the events of the past. While clearly present, and participating throughout historical events of the past, often women’s voices were not as often acknowledged or given the same attention as that of men. Emerging from the Patrick H. Pearse Branch of the Friends of Irish Freedom’s Minute Book are the voices of many women who stridently organized and participated in the movement for Irish Independence during the early twentieth century. Founded during the third Irish Race Convention, held from March 04, 1916 to March 05, 1916, the Friends of Irish Freedom was founded with the aims of both supporting and assisting in the movement for Irish independence. 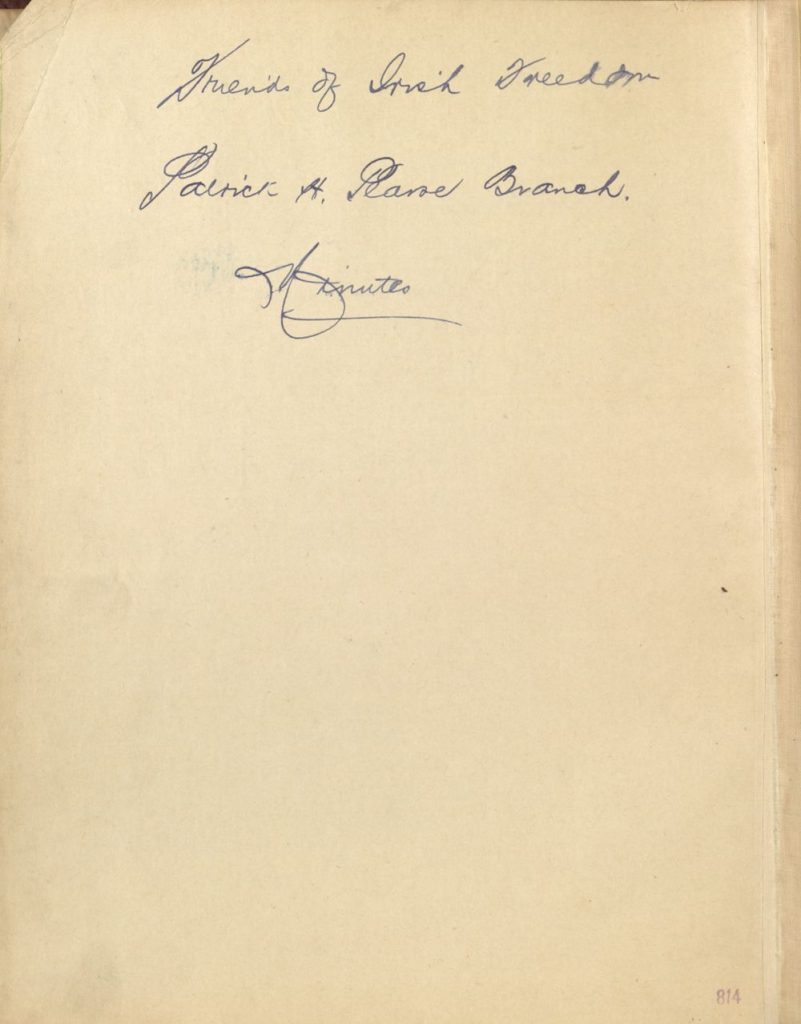 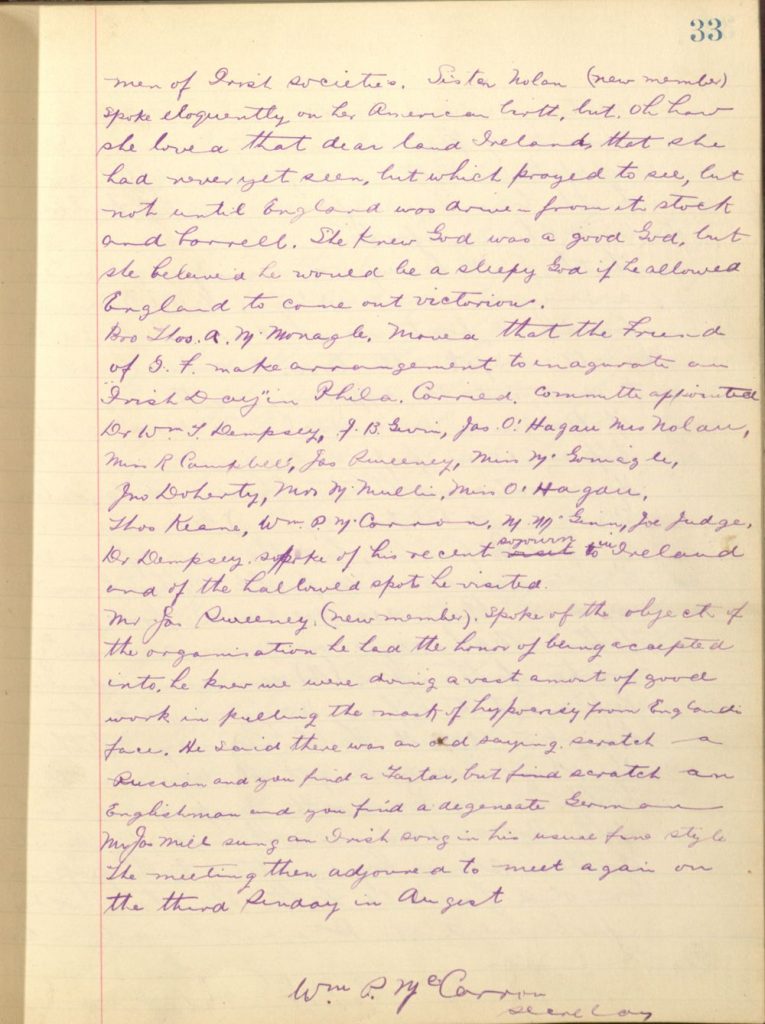 Denoting this openness to women’s involvement in the organization was the way that women were supported throughout the manuscript in not only voicing their opinions on Irish independence, but also in participating and running for elected positions within the branch, as well as taking part in committees. The voice of Mary Nolan emerges strongly from the manuscript, wherein she consistently participated in discussion, was appointed to various important committees, and was elected as Chancellor and later Chairlady of the Ball Committee. From reading the manuscript, one gains the sense that Nolan was well-respected within the branch, along with the other women who joined the branch. Women were referred to as “Sister” and men were referred to as “Brother.” Moreover, the way Nolan was written about further demonstrates the respect that she received from the organization. For example, the secretary wrote on page 33, “Sister Nolan (new member) spoke eloquently on her American birth.” The use of “eloquent” demonstrates that the secretary respected what Nolan had to say, and acknowledged the persuasiveness and clarity of her speech. Also evident from the manuscript, was the dedication that women in the organization felt towards the cause of Irish independence. Nolan, is recorded in the manuscript on page 33 as having conveyed that “she loved that dear land Ireland, that she had never yet seen, but which prayed to see, but not until England was driven from its stock and barrell [sic]. She knew God was a good God, but she believed he would be a sleepy God if he allowed England to come out victorious.” From the passionate wording of Nolan, and the respect with which her oration was recorded, it is evident that women contributed and voiced their beliefs freely within the Patrick H. Pearse Branch of the Friends of Irish Freedom.

Nolan was not the only woman to emerge from the pages of the minute book from the Patrick H. Pearse Branch of the Friends of Irish Freedom. Women such as Margaret Kain, Marie Seary, Annie Doyle, Mary O’Hagan, and many others also appear in the text. With each appearance one sees these women being accepted and actively participating in committees and elections within the organization, and actively contributing to the cause for Irish independence.
——————–
Emily Poteat is a graduate assistant in Irish Studies and Falvey Memorial Library’s Distinctive Collections and Digital Engagement Department, and a graduate student in the History Department.