Poetry commonplace books can be gateways to understanding not only individuals, but also, they can inform on what popular literature was consumed during a specific time period. Mary Linehan’s Poetry Commonplace Book, held by Villanova’s Distinctive Collections, is an example of such a manuscript. 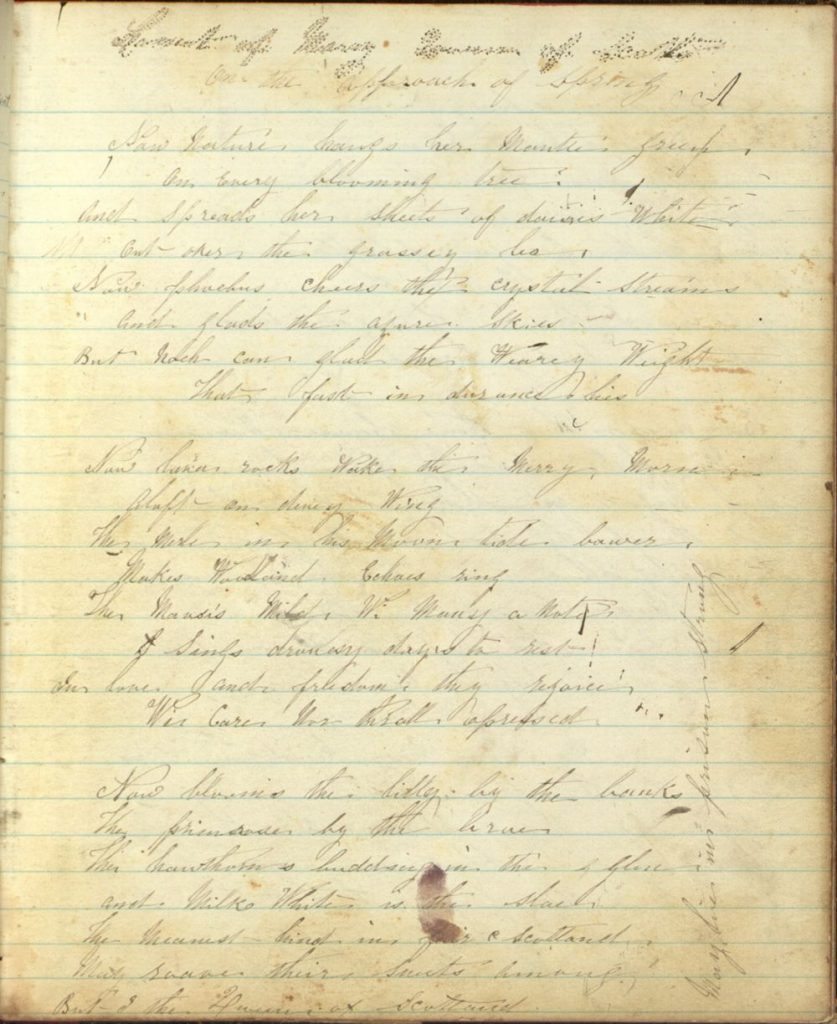 Photograph of Linehan’s Lament of Mary Queen of Scots

While giving a glimpse into the life of Linehan, Linehan’s commonplace book also gives the reader an understanding of what literature was being consumed by Americans in the late 19th century. Linehan’s 19th century commonplace book is filled with numerous poems, and many of which are from an array of American, Scottish, and Irish poets. Temporally, the poetry found in Linehan’s manuscript ranges from the late 16th century all the way to the 19th century. This is significant as it points to the reach of the different types of literature that Irish Americans were being exposed to in the 19th century. From Thomas Moore to a 16th century earl, Wentworth Dillon, 4th Earl of Roscommon, this commonplace books brings features a wide array of poets and poetry styles. Furthermore, the poetry book also features a poem by Robert Burns. Burns was a Scottish poet and lyricist, and his poem “Lament of Mary Queen of Scots,” is one of the poems that Linehan copied into her commonplace book. Burns was well-known for his poetry being in the Scottish dialect, and Burns is known as the pioneer of the Romantic movement. The poem, “Lament of Mary Queen of Scots,” is from the perspective of Mary Queen of Scots, and details the events of her life and her agony of not seeing her son grow up. This poem fits in with the overall theme of loss and sadness that is laden throughout Linehan’s commonplace book. Moreover, the variations in the text from Linehan’s handwritten copied version of the poem to Burns’s original poem is also interesting to note. This is through the way Linehan omitted much of Burns’s Scottish dialect, and opted to substitute the traditional English spelling of the words. However, Linehan did at times maintain the Scottish dialect in the poem and it is hard to discern a pattern in how she chose to keep the Scottish dialect or omit it. 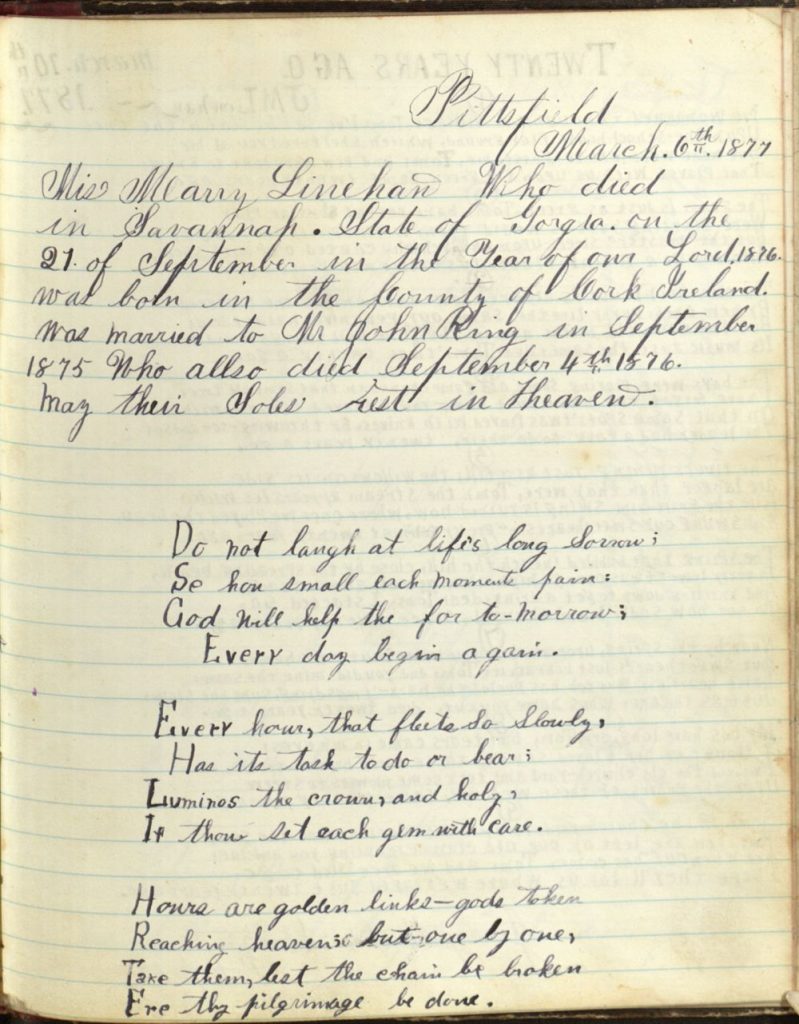 This manuscript also allows a deeper understanding of an Irish-American woman during the 19th century. According to the manuscript, as well as state records, Linehan was born in Cork, Ireland c. 1851 to Michael and Catherine Linehan. When Linehan moved to Georgia in the late 19th century, she met her husband John Ring, and on September 27, 1875 Ring and Linehan married. Almost a year after their marriage, both Ring and Linehan died. Ring died on September 04, 1876, and Linehan died September 21, 1876. These events are chronicled by a family member in Linehan’s commonplace book, presumably by a relative, as the page detailing this is marked “J.M. Linehan.” After Linehan’s death, J.M. Linehan, who recorded Mary and her husband’s death in the manuscript, began to record poetry in the book as well. Both selections of poetry made by Mary Linehan and J.M. Linehan, are all seemingly concerned with fidelity, infidelity, and loss. This is important to note, as these themes defined the types of poetry found in the book, and seemingly one could infer that these poems were chosen because of their likeness in theme to one another.

As a whole, Linehan’s poetry commonplace book offers a glimpse into the literature one Irish-American woman was consuming during the 19th century; however, it also offers a deeper understanding as to the types of literature being consumed by the broader 19th century American public.