Green Voices of the Past: The Friends of Irish Freedom and World War I

World War I erupted into an international conflict on July 28, 1914, and the conflict held a multitude of implications for people around the world. A lesser amplified voice in historical studies on the conflict, is that of Irish Americans.

Presently, I am working through the Minute Book of the Patrick H. Pearse Branch of the Friends of Irish Freedom. The Friends of Irish Freedom was an Irish-American organization founded during the third Irish Race Convention, held from March 04, 1916 to March 05, 1916. Further, the organization held the aims of supporting and assisting in the movement for Irish independence. Voices of men and women fighting for Irish independence fill this manuscript, and throughout the work their political and cultural beliefs come to light through the descriptions of their bi-monthly meetings. World War I, emerges in the minute book for this organization, as a highly contentious conflict that held implications of imminent importance for the movement for Irish independence. 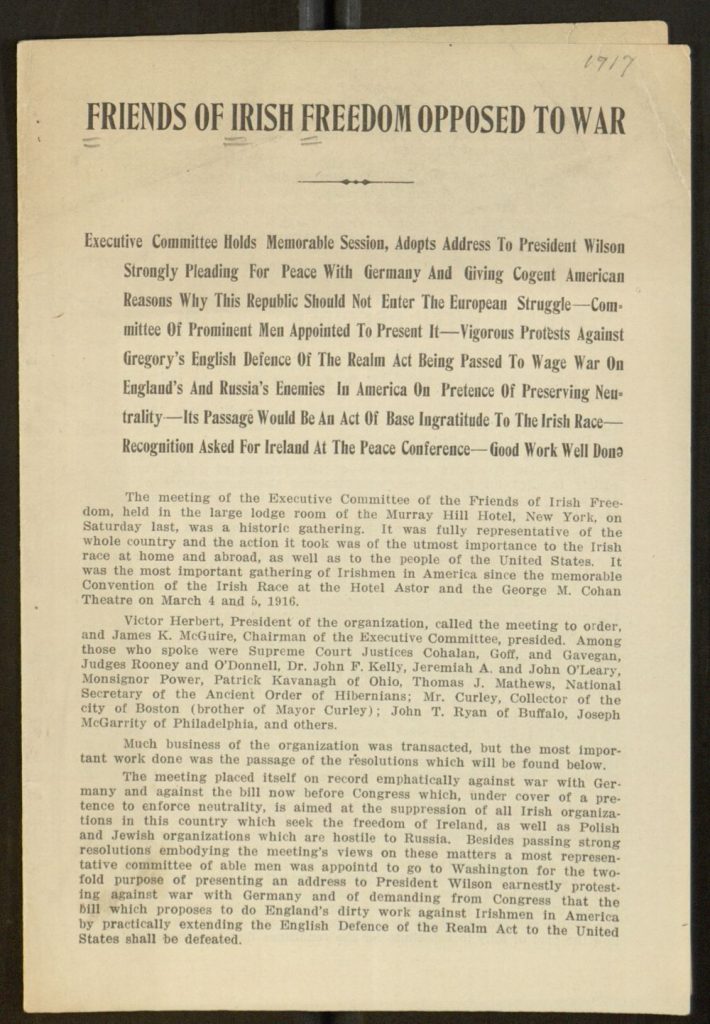 Friends of Irish Freedom Opposed to the War

Conscription is directly confronted by the members of the Patrick H. Pearse Branch of the Friends of Irish Freedom, wherein, members are described as making patriotic speeches for Irish-American resistance to the war, specifically through resisting the draft. While these men and women felt a deep dedication to the United States, they also expressed patriotism to Ireland, where they were all steadfast in their dedication to the cause of Irish freedom. Because of this, they negatively viewed the war because of its inherent connection to England. This is most evident through the voice of Father Collins, who gave a speech appealing “to all members of the F.O.I.F. to stand by all young Irishmen who refused to be drafted” (p. 43). These feelings of animosity, amongst the members of this branch of the Friends of Irish Freedom, towards the war, seemingly were stemmed from World War I’s association with England. This sentiment is best summed up on page 29 in the minute book, when a visitor to the meeting, a “Mr Jos McGarrity,” this most likely being Joseph McGarrity, is described as stating “he wanted to know why we Americans should be in the war at all as this surely was Englands war and England only Sung by a lady guest” (p. 29) These statements that are described as being from McGarrity in the text are interesting, as they represent the enmity many Irish-Americans felt towards England. 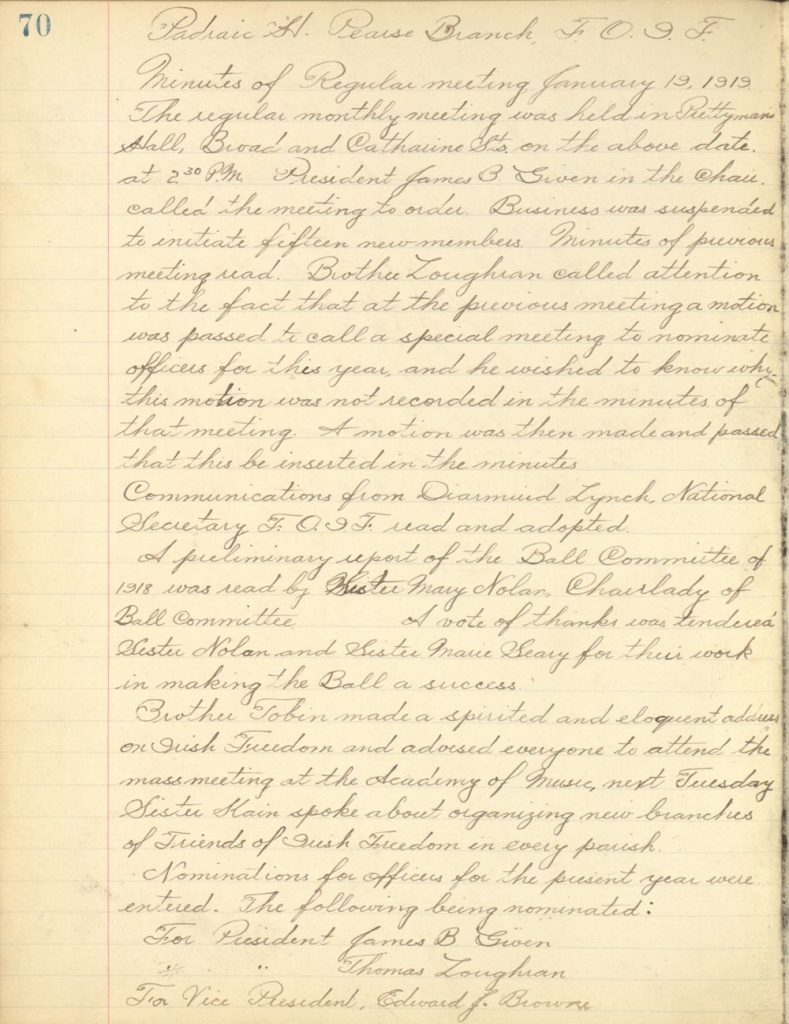 The Patrick H. Pearse Branch of the Friends of Irish Freedom did seem to think World War I could have positive implications for the cause of Irish Independence, as they believed President Woodrow Wilson’s article five of his “Fourteen Points,” made a case for Irish independence. Father Mahoney’s voice is amplified in the minutes from a meeting of the organization, on November 17, 1918, where the minutes state Father Mahoney “made an elocuent [sic] address on Irish Independence…He outlined President Wilson’s declaration regarding the rights of small nations, and stated that Ireland should have delegates at the Peace Conference” (p. 68). Father Mahoney’s speech illuminates the hopes that Irish-Americans felt that the Paris Peace Conference would mark a monumental shift in the fight for Irish independence, and shows how Irish-Americans utilized not only cultural, but also political means to make moves towards the cause of an independent Ireland.

Through reading the Minute Book of the Patrick H. Pearse Branch of the Friends of Irish Freedom, one not only garners a deeper understanding of the commitment of Irish-Americans to aiding the cause of Irish independence, one also learns the names behind those taking part in the movement. This minute book amplifies the voices of Irish-Americans participating in a movement they were deeply committed to.