Green Voices of the Past : First Reflections

Uncovering voices of the past is an interesting prospect. Voices one once considered lost to time can be brought to the present through work in archives. My Graduate Assistantship with Falvey Library’s Distinctive Collections and Irish Studies aims to do just that. Through transcribing historical documents in Villanova’s collection, every day I am confronted with the experiences and distinct voices from unique figures from the past. 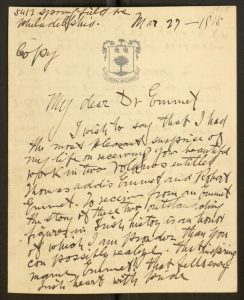 From transcribing these documents, so far, I have learned about Joseph McGarrity, an Irish-American who steadfastly worked towards the cause of Irish Independence. McGarrity’s voice has been one of the strongest voices, in these historical documents, that I have encountered so far. From simply reading a letter by him, one gets a sense of his own perceptions of duty and patriotism for the Irish Republican cause. For instance, in a letter from McGarrity to a correspondent of his, Dr. Emmet, McGarrity demonstrates his sense of duty and patriotism by saying, “the story of these two outstanding figures in Irish history is an honor of which I am prouder than you can possibly realize.” 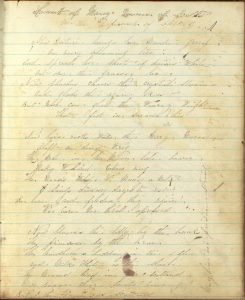 Another strong voice that emerged in my work thus far, was that of Mary Linehan in the manuscript, entitled Mary Linehan’s Irish-American Poetry Commonplace Book. From her distinctive handwriting, Linehan conveyed, seemingly, her deepest feelings and sorrows. Linehan’s poetry book was, in a sense, like a glimpse into Linehan’s emotions. One is struck by the depth of her emotions that she conveyed throughout the poems she included in her work, and the deep sorrow that runs throughout the manuscript as a distinct theme. Poems discussing infidelity, the loss of a child, and reflections on life in old age are dominant in Linehan’s manuscript; with poems on happiness and joy being much fewer and harder to find. What is unclear, and I would still like to know more about, is which poems she authored herself, and which were from popular poetry of the time. Within the manuscript, only the newspaper clippings, and one poem entitled “The Little Baby that Laughed,” includes an author, otherwise it is unclear is she was the author of these poems. Upon researching this, I found that one poem, written in Linehan’s hand with no author listed, entitled “Lament of Mary Queen of Scotts,” was in actuality a poem written by Robert Burns, and published in Burns’s book, Poems Chiefly in the Scottish Dialect. Burns was a famous poet during the eighteenth century and was known for the distinct Scottish dialect that he wrote much of his poem in. It is fascinating to consider how in what form Linehan encountered Burns’s poem, and what compelled her to include it in her manuscript.

By transcribing these documents, and engaging with the history surrounding them, I have found myself often trying to imagine what these figures were thinking, and what emotions they were experiencing when creating them. While we can not know for certain these things about the figures who created these documents, we can preserve their voices and experiences, and I look forward to sharing more as I discover them.