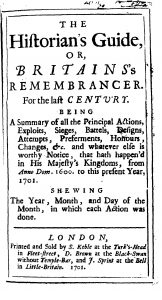 Eighteenth Century Collections Online is broken into two parts and offers full text access to nearly every English-language and foreign-language title printed in the United Kingdom, alongside thousands of works published in the Americas, between 1701 and 1800. It consists of books, pamphlets, broadsides, and ephemera. Multiple editions of individual works are offered where they add scholarly value or contain important differences.

Until recently Falvey Library only had access to Part I, this spring we were able to update our access to include Part II. Part II has an emphasis on literature, social science, and religion. Both Parts I & II are accessible through the same link in Databases A-Z and elsewhere on the library’s website and users accessing Eighteenth Century Collections Online do not need to do anything special to search either part as the two are now seamlessly integrated.

If you have any questions about using or accessing Eighteenth Century Collections Online please feel free to contact your subject librarian.

Image courtesy of Eighteenth Century Collections Online (Gale Primary Sources): The historian’s guide, or, Britains’s [sic] remembrancer. For the last century. Being a summary of all the principal actions, exploits, sieges, battels, designs, … from Anno Dom. 1600. to this present year, 1701.