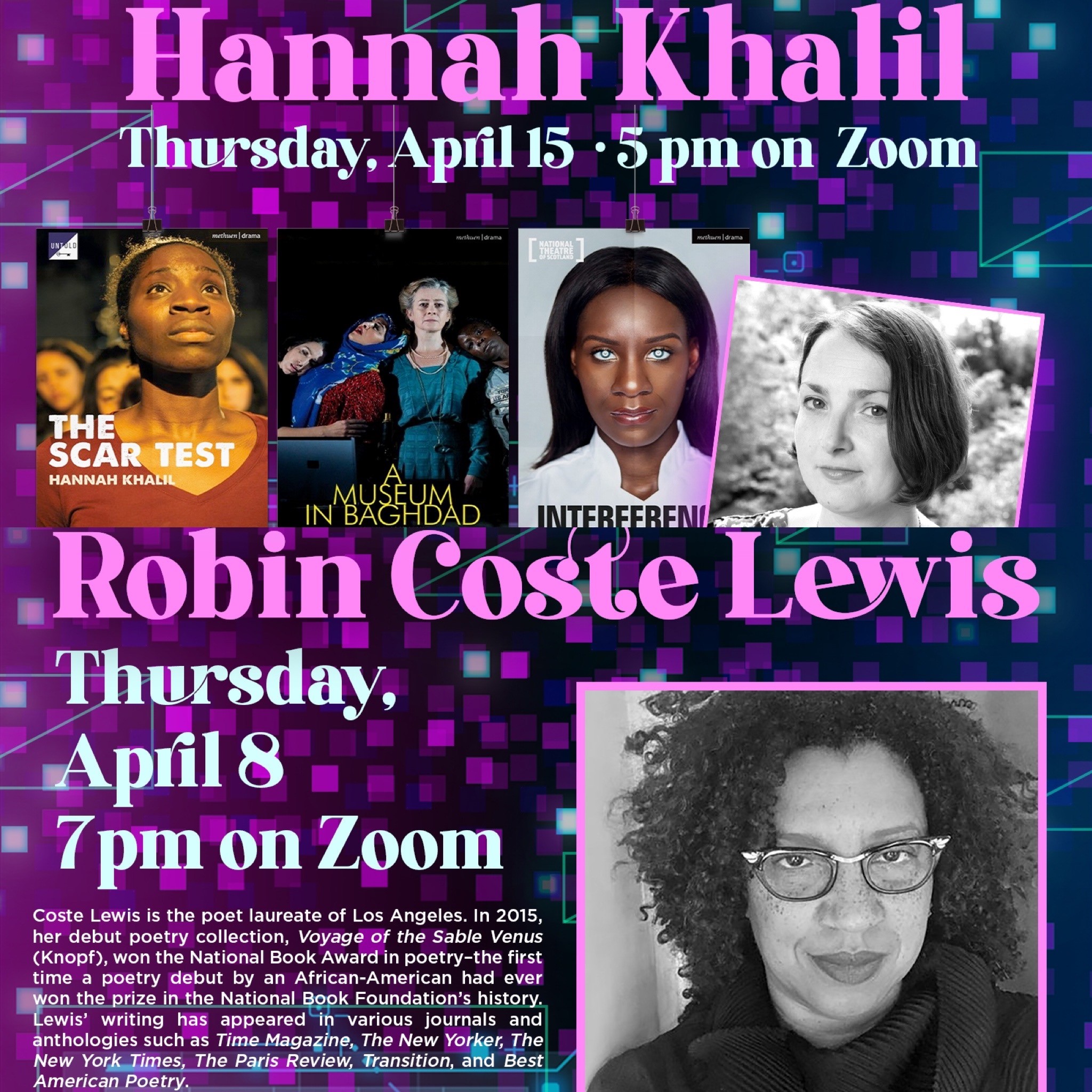 The 23rd annual Villanova Literary Festival resumes on Thursday, April 8! Please REGISTER for the two remaining virtual readings and talks. After registering, you will receive a confirmation email containing information about joining the event. All readings are ACS approved!

Coste Lewis is the poet laureate of Los Angeles. In 2015, her debut poetry collection, Voyage of the Sable Venus (Knopf), won the National Book Award in poetry–the first time a poetry debut by an African-American had ever won the prize in the National Book Foundation’s history. Lewis’ writing has appeared in various journals and anthologies such as Time Magazine, The New Yorker, The New York Times, The Paris Review, Transition, and Best American Poetry.

Palestinian-Irish writer and playwright, Hannah Khalil holds the Charles Heimbold Chair of Irish Studies for Spring 2021 at Villanova University. Her work for stage includes A Museum in Baghdad, which opened at the Royal Shakespeare Company’s Swan Theatre in 2019, Interference for The National Theatre of Scotland, The Scar Test for Soho Theatre and Scenes from 68* Years for the Arcola. She is currently under commission to write new work for Shakespeare’s Globe, Chichester Festival Theatre, The Kiln and Golden Thread San Francisco. Alongside her theatre work, Khalil has written numerous radio plays, including The Unwelcome, Last of the Pearl Fishers and The Deportation Room all for BBC Radio 4. Television work includes multiple episodes of the Channel 4 drama Hollyoaks. Khalil’s first short film, The Record, won the Tommy Vine screenplay award at the Underwire film festival, and went on to be made. It was selected at London Palestine Film Festival and Almagro Festival as well as Filmets Badalona. It was a finalist in the Tolpuddle Radial Film Festival.

Shaughnessy is the author of five poetry collections, including The Octopus Museum, So Much Synth (2016, Copper Canyon Press) and Our Andromeda (2012), which was a finalist for the Kingsley Tufts Award, The International Griffin Prize, and the PEN Open Book Award. A 2013 Guggenheim Foundation Fellow, Shaughnessy is Associate Professor of English and Creative Writing at Rutgers University-Newark.

Washington’s debut collection of short stories, Lot, was published by Riverhead in 2019. His fiction and essays have appeared in The New York Times, The New York Times Magazine, The New Yorker, BBC, The Paris Review, Tin House, and numerous other publications. Washington is also a National Book Foundation 5 Under 35 winner, and the recipient of an O. Henry Award.

His first novel, Memorial was released on Oct. 27, 2020. The New York Times called it a Notable Book of 2020 and TIME called it one of their books of the year. So did the Los Angeles Times, Entertainment Weekly and Vanity Fair.