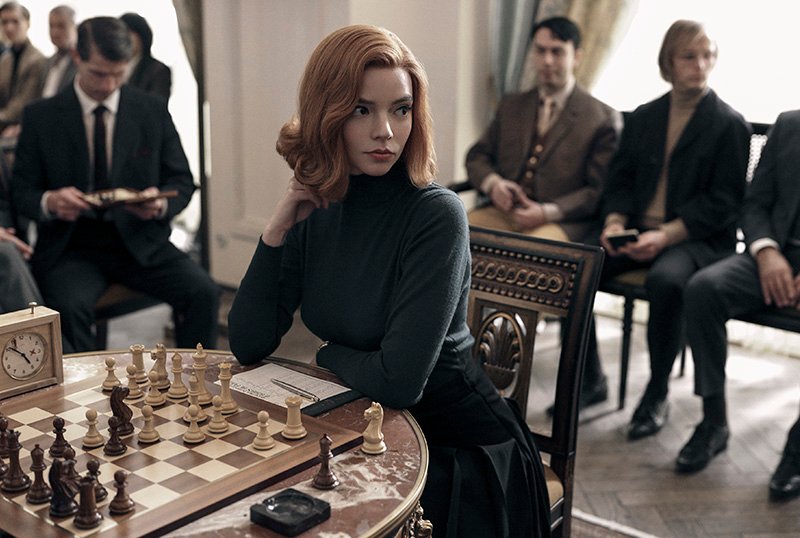 Anya Taylor-Joy as Beth Harmon in “The Queen’s Gambit.” Image courtesy of Netflix.

Since its release on Oct. 23, Netflix’s limited series “The Queen’s Gambit” has reignited interest in the game of chess. The New York Times reported, “Over the last year, sales of chess sets in the United States rose by around 25 percent, only slightly faster than the toy industry overall…but in the weeks since ‘The Queen’s Gambit’ premiered sales have grown 125 percent.”

The series, named after a chess opening, is based on the 1983 novel of the same name by Walter Tevis. Set in the 1960s, Netflix’s installment follows orphan and chess prodigy Elizabeth “Beth” Harmon on her journey to become the greatest player in the world. Although I had some knowledge of chess (shoutout to my fourth grade teacher Mrs. Pickerel!), the series delves into nuances of the game I’d never strongly grasped, including an array of opening, middle, and end game strategies.

While I haven’t read Tevis’ novel, I recommend Netflix’s adaptation if you’re looking for something to watch during the pandemic.

Interested in learning more about chess? Whether you’re as skilled as Garry Kasparov or can’t tell a pawn from a knight, Falvey Library has multiple resources on the history and strategies of the game. Check out a few below (most are accessible in e-book format). Contactless pickup is available for books, DVDs, and other circulating items from the Library’s online catalog.