Hispanic Heritage Month is celebrated each year from Sept. 15 through Oct. 15 and serves as a way to intentionally celebrate the culture and contributions of Latinx and Hispanic communities worldwide. The observation began as Hispanic Heritage Week in 1968 and was expanded in 1988 to be a month long. 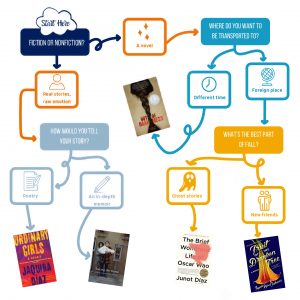 A perfect way to celebrate is by grabbing a book written by and about Hispanic and Latino American authors. Check out our graphic to determine which book is perfect for you to read.

Ordinary Girls by Jaquira Díaz: Jacquira Diaz’s life and enthralling memoir begins in Puerto Rico with a carefree childhood and follows Diaz on her journey to Miami, where her life is turned on its head as she enters adolescence. Diaz then recounts her time in the military and then a college education. Ultimately, she is able to find resilience in the most difficult of times.

Out of Darkness by Ashley Hope Perez: The setting is New London, Texas, in 1937, right before the New London school explosion. East Texas is divided based on race, which everyone is painfully aware of, yet Perez tells the story of Naomi Vargas and Wash Fuller, two people with an attraction so powerful it breaks through segregation, despite the consequences.

Fruit of the Drunken Tree by Ingrid Rojas: This story by Ingrid Rojas takes place against the backdrop of the violence of Colombia in the 1990s. Rojas explores the difference of wealth, especially while living in a country in turmoil. The story is inspired by Rojas own life and contrasts two very different, but inextricable coming-of-age stories.

The Brief Wondrous Life of Oscar Wao by Junot Diaz: For anyone who loves ghost stories, Junot Diaz’s story of Dominican Oscar Wao whose family has been haunted for generations. As Oscar works to overcome the curse, he displays the endless human capacity to persevere while simultaneously giving insight into the Dominican-American experience.

If you still want more, check out the following fiction and non-fiction books as well: