‘Cat in the Stax: The Oxford Comma

In celebration of National Punctuation Day tomorrow, Thursday, Sept. 24, I decided to bring up the age-old debate surrounding the Oxford comma. For those of you new to this dispute, the Oxford comma is the last comma in a list of three or more. In 2017, there was a $10 million lawsuit, essentially, over an Oxford comma. Let’s explore the lawsuit then break down the arguments a little further. 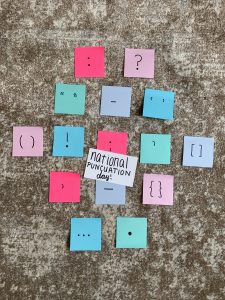 Back in 2017 in Maine, a class action lawsuit took place as drivers for Oakhurst Dairy sued the company for failing to grant them overtime pay. According to Maine law, workers should receive 1.5 times their normal pay for any hours worked over 40 per week. However, there are exemptions to this rule. The law says that companies don’t need to pay overtime for: “The canning, processing, preserving, freezing, drying, marketing, storking, packing for shipment or distribution of: (1) agriculture produce; (2) meat and fish project; and (3) perishable foods.” The Oxford comma, had it been included, would be before “or” in the bolded section of the quote.

Ultimately, because the law was not clear, the judge ruled in favor of the drivers… and the Oxford comma!

To Comma…
Chicago style, which is commonly used by book publishers, academics, and trade publications, does require an Oxford comma in all scenarios. Proponents of the Oxford comma, including the creators of Chicago style, have a variety of arguments in favor of their position, two of which I’ll attempt to break down here.

(1) It takes two seconds to add a comma. Some of you are probably reading this post and thinking, “She’s seriously writing a full post about a comma? Just add the comma and move on with your life.” That goes along with the idea that it literally takes less than a second to add in the comma, so we might as well just add it and move on.

(2) It helps avoid ambiguity. This second argument has a little more meat to it than “just do it.” The Oxford comma is used to add clarity to lists. Had the Maine law included the Oxford comma they would have saved Oakhurst Dairy $10 million dollars.

Maybe at this point you’re thinking of some counter-arguments as to why the Oxford comma is not, in fact, necessary.

Or Not to Comma?
AP Style, the preferred style for journalists and news, does not require the Oxford comma, although they do say to use it if doing so could avoid confusion or misinterpretation. We have broken down below two of the main arguments commonly brought up by people against the Oxford comma.

(1) Using common sense will help avoid ambiguity. Let’s go back to our example from earlier. One could argue that no one who knows who either Taylor Swift or J.R.R. Tolkien are would mistakenly read the sentence as saying that they are my parents. By applying common sense to the situation, there is no ambiguity.

The Verdict
My opinion is that it’s clearer and easier to just put in an Oxford comma. I would rather just throw in an extra comma than re-work an entire sentence that I’m writing. For consistency purposes, I would argue that people should just use an Oxford comma all the time.

My advice would be to adhere to whatever side or style your employer or the person you are writing for adheres to, but in your own personal writing, make your own decisions based on what makes sense to you.

Which side of the debate do you fall on? Let us know in the comments!

Jenna Newman is a graduate assistant in Falvey Memorial Library and a graduate student in the Communication Department. Current mood: Sending back punctuation edits to my friend’s text messages.