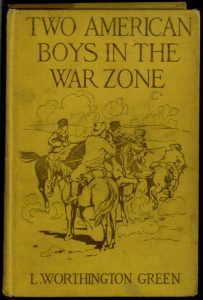 Another book from our Digital Library has passed through the Distributed Proofreaders process and into Project Gutenberg. Like many of our recent releases, this is a juvenile novel written and set during the first World War: Levi Worthington Green’s Two American Boys in the War Zone.

The novel, a direct sequel to the author’s The Boy Fugitives in Mexico, has a pair of brothers separated from their father while on vacation in Russia. The father’s ability to speak German leads to his arrest as a possible spy, and the boys make a long and dangerous journey to find their way home to their mother. While the shadow of the war hangs over the novel and influences some of its major events, the author’s focus seems more on providing an incident-filled travelogue of Russia than on describing key events of the conflict.

This book was marketed to children by a major publisher in 1915, but it would not receive the same treatment today. The author clearly meant to paint the titular siblings in a heroic light, but their depicted attitudes toward race and violence provide a few genuinely shocking moments for the contemporary reader. While the novel is decidedly inappropriate as a piece of family entertainment, it might offer some insight for the cultural historian.

The full text of the book can be read online or downloaded in popular eBook formats through Project Gutenberg.