The Faces Behind the Falvey Fan Page @humans_of_falvey

I’m Daniella Snyder, a graduate student at Villanova University, and your ‘Cat in Falvey Library’s Stacks. I’ll be posting about academics–from research to study habits and everything in between–and how the Falvey Library can play a large role in your success here on campus!

Most Villanova students spend a significant amount of time in Falvey, viewing studying in the library as one of their many academic obligations. However, for two students, Melwin “Solu” Rajan ’20 COE and David Sepulveda ’20 COE, Falvey was an integral part of their college experience. During their four years as Villanova students, the Library was not just a place to study. Falvey was a place to meet new people, find community among fellow students, and make lasting friendships. 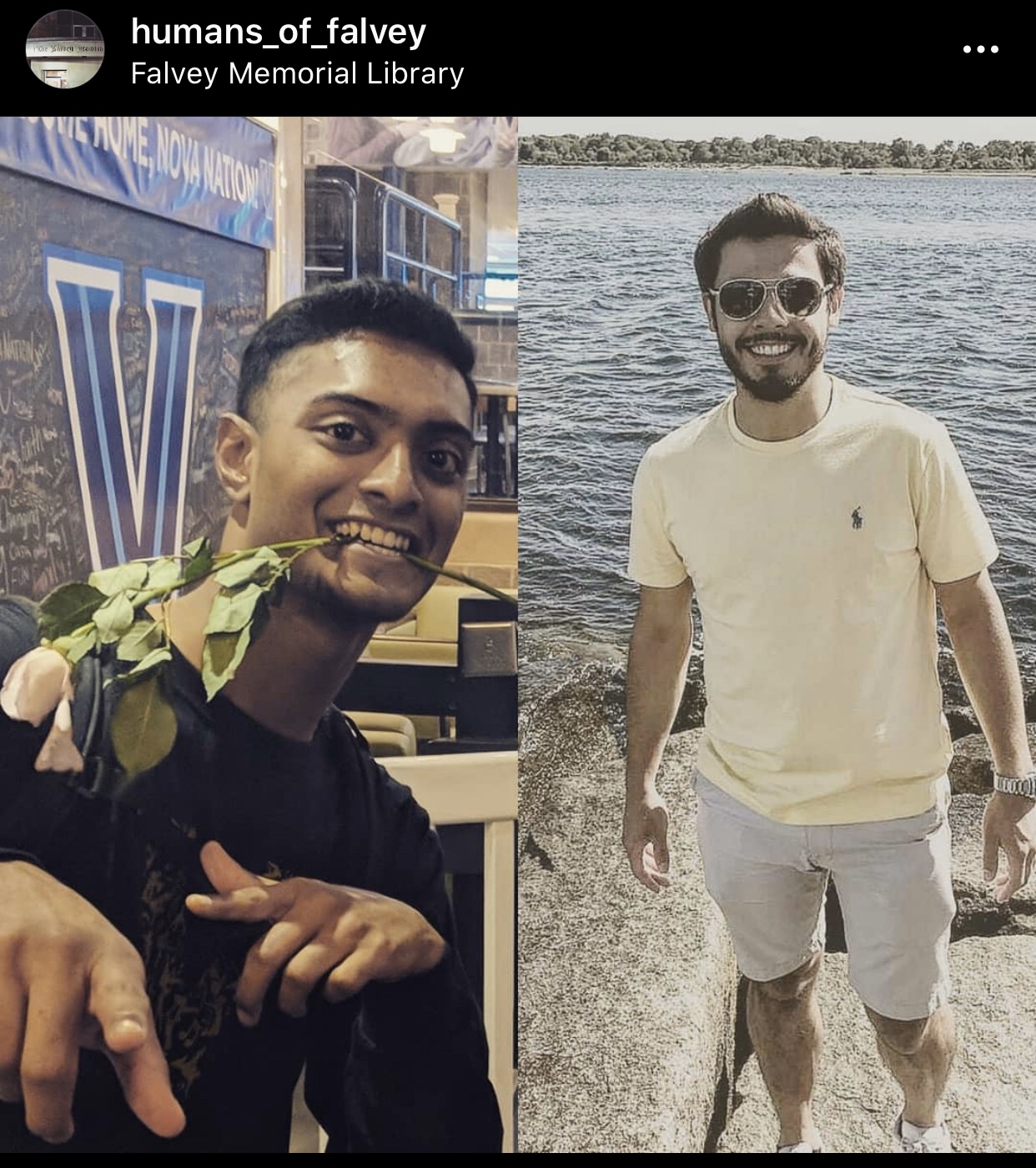 Melwin “Solu” Rajan and David Sepulveda are the no-longer anonymous faces of the Humans of Falvey Instagram account.

Thus, they created an Instagram account dedicated to highlighting Falvey’s biggest fans: @humans_of_falvey. With the account, they highlighted the Reading Room regulars, the night owls, and the Holy Grounds addicts. They applauded the Falvey Scholars, motivated students during midterms and finals, and shamed those who failed to recycle iced coffee cups properly (for more context, visit their Instagram!) Over the last three years, the account has gained over a hundred followers and counting, some of them Falvey staff and librarians.

The idea for the social media account materialized during the students’ sophomore year, a year known for massive workloads and countless hours of studying. “We were practically pushed into the library,” Sepulveda recalls. After weeks of spending hours in the library every day, Rajan and Sepulveda began to recognize other frequent Falvey-goers.

Eventually, they became friends with these familiar faces, taking study breaks together. “We had this social group of people form by spending all of our time in the library,” Sepulveda noted with a laugh. “It really started as a joke,” Rajan admits. The two Engineering majors, along with a Nursing student and a few other friends were eating dinner in the “Pit” one night when the idea came to them. It felt like all of these students who were always in Falvey were in a club, “sort of social, sort of academic, but centered around Falvey,” he explains.

Sepulveda remembers asking himself—and the rest of the group—“How do we do something to bring those people together?”

They cleverly began to call themselves “members” of Lambda Iota Beta (LIB, short for “library”), printed off fraternity-style t-shirts, and created an Instagram account to accompany their new club: @humans_of_falvey. Rajan and Sepulveda started walking around the library, introducing themselves to some new Falvey fans. They would strike up a conversation, inquire about what they were working on, post a photo of the student (or study group) with a funny quote, either about coffee, staying up all night, or cramming for a big exam.

Ultimately, the goal with @humans_of_falvey was to “make sure people felt a sense of solidarity,” Rajan says. “None of us really want to be up all night studying, but we wanted to create a sense of camaraderie to make light of a situation that isn’t ideal.” However, Rajan and Sepulveda had no idea that some of their closest friendships would result from these brief interactions in Falvey.

One post from April 2018 shows two gentlemen at work in Holy Grounds. Before that picture was taken by Rajan, none of them knew each other. Now, because of Humans of Falvey, not only are they all good friends, one of the students featured in the post became Rajan’s roommate! Another post features a student named Bryan, a then-sophomore who began studying with the upperclassmen members of LIB, and is now a close friend.

When I had the chance to speak with Rajan and Sepulveda, my main question was: “Why Falvey? What was so special about this space?”

For an Engineering major whose assignments were usually group projects, Rajan needed Falvey’s group study spaces. Plus, the 24-hour access and close proximity to food and coffee are benefits, he admits. For Sepulveda, a late-night studier, the first floor keeps him motivated to power through studying until 2 or 3 a.m.

While Rajan and Sepulveda have acted as the semi-anonymous faces behind the account, after the library’s closure due to COVID-19, the two students finally revealed themselves with a heartfelt parting message:

It is with a heavy heart that the two of us say goodbye to studying with you in Falvey. It is a place we call home, to study, to laugh, to breakdown, and to remember. As the two of us see our college career come to an end, we want to thank each one of you for helping make the library our home.

While Rajan and Sepulveda originally intended to share this account between their circle of friends, the account “exceeded expectations,” with students all over campus hoping to be featured on their Instagram. Like they hoped to show, students can turn to the Instagram account to find camaraderie and community among their classmates. And, like them, Rajan and Sepulveda have inspired countless other students to make the library their home.

In the wake of COVID-19, Sepulveda’s relationship with Falvey has undeniably changed:

COVID-19 has changed my appreciation of Falvey by allowing me to understand how privileged I was to have a location to study and collaborate with my peers. It was a place I felt very comfortable in, and learning to be a student outside of the confines of its walls has been challenging. I specifically have been missing tools like printers, scanners, computers…and I really miss the large tables on the first floor which are great for studying with friends.

Further, and also as a result of COVID-19, the continuation of the Instagram account is still uncertain. Sepulveda and Rajan, on top of their assignments and preparation for online finals, are trying to select potential successors to the account.

After graduation, Sepulveda will begin his career in his home state of Maine.

Daniella Snyder is a graduate assistant for Falvey Memorial Library and a graduate student in the English department. This week, she’s reading The Upside of Being Down by Jen Gotch.