With the world currently battling a new global pandemic of the novel coronavirus that causes COVID-19, many news sources are looking back at the 1918-1919 worldwide influenza pandemic commonly known as the Spanish flu. An estimated 500 million people, or one-third of the world’s population, became infected with the virus and the number of deaths is estimated to be at least 50 million worldwide with about 675,000 deaths occurring in the United States.

While researching one of our newest Digital Library collections from partner organization The Museum of Nursing History, I came across a featured article in Columbia University’s School of Nursing Alumnae newsletter highlighting Ada Mutch and her experience in 1918.

Philadelphia in particular had “the highest, most rapidly accumulating death toll” in the country. With many doctors, nurses, and medical staff serving overseas in World War I, it was left to nursing students and lay people to step in and help tend to the sick. In Bryn Mawr, the local hospital was overwhelmed with patients and an emergency hospital was opened in the old, vacant Lancaster Inn. At thirteen years old, future World War II army nurse Ada Mutch and her sister volunteered as kitchen help preparing food and serving meals to the doctors, nurses, and staff. They helped to prepare visitors by dressing them in protective gowns and masks and escorting them to see their ill family members. Amazingly, none of the Mutch family became ill. 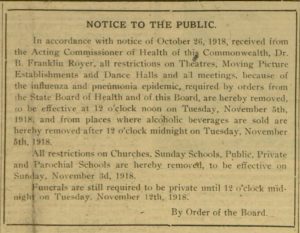 Towards the end of October 1918 the Board of Health for the state of Pennsylvania began to gradually lift quarantines and reopen public places. In our Digital Library, an article in the November 2nd issue of the Ardmore Chronicle reports, “after four weeks the influenza ban which has kept the lid upon virtually every form of activity in the community outside of those connected with the most stringent needs of the people and Government, will be lifted tomorrow in Lower Merion, when the churches will be permitted to resume services. Monday the schools will again hold daily sessions, and Tuesday saloons, theatres, poolrooms, dance halls and other public places will be allowed to open.” Still, the Acting Commissioner of Health, Dr. Benjamin Franklin Royer warned, “great care should be practiced at the time of removing restrictions.”

While we are currently practicing “social distancing” here in Pennsylvania in 2020, Falvey’s Digital Library is always open and awaiting your discovery!