Header for a special supplement on women’s suffrage in the May 1, 1915 issue of the Ardmore Chronicle.

In honor of Women’s History Month and the 100th anniversary of the passage of the 19th Amendment, we’ve created a digital mini exhibit featuring some of our women’s suffrage materials from Falvey’s Distinctive Collections. 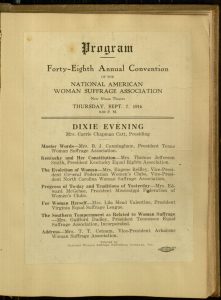 Beyond that, we have several articles and advertisements from national and local print media outlets from the early 20th century. 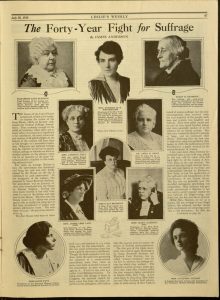 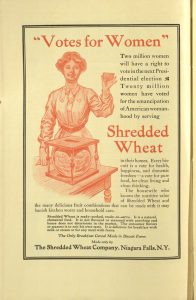 Advertisement for Shredded Wheat. The Fra: A Journal of Affirmation, Jul. 1913, rear cover.

These materials were originally pulled for a pop-up exhibit to complement the Lepage Center’s “Revising History: Women’s Suffrage” panel discussion that had to be canceled this month. We are thrilled that we can still share these materials digitally.