This week, I was struck by this 1990 Black History Month article from The Villanovan. In the article, then entertainment editor Stephen Powers offers us a brief history of black television, from the “golden years” of the 1950s, to the radical changes in the 1980s with the creation of The Cosby Show and Family Matters.

While he writes that progress has been made since the 1950s when it comes to diverse representation on major sitcoms and soap operas, Powers concludes his article by acknowledging that despite these advances, “there is still some progress to be made,” citing what was then top television shows with casts that were illogically all white, like Cheers and Murphy Brown. He also critiques Saturday Night Live, which in 1990 featured an entirely white cast.

In the 1990 article, Powers writes that he believes progress will be made in the next decade. Now, three decades later, progress has indeed been made. Major sitcoms like Blackish, Mixed-Ish, Good Trouble, and Grownish prioritize diversity of all kinds, from race to sexuality, gender identity, and ability. Since 1990, Saturday Night Live has grown to be incredibly diverse, too.

However, now, just like 1990 when Powers was writing, more progress can still be made. Despite the presence of diverse television shows, sitcoms with (almost) all white casts like The Office and Friends still gather large followings and huge viewerships. The 2017 reboot of Dynasty (a show Powers mentions) is almost as white as it was in earlier iterations. Large cable programs like The Bachelor and Bachelorette rarely (and sometimes never) feature people of color. 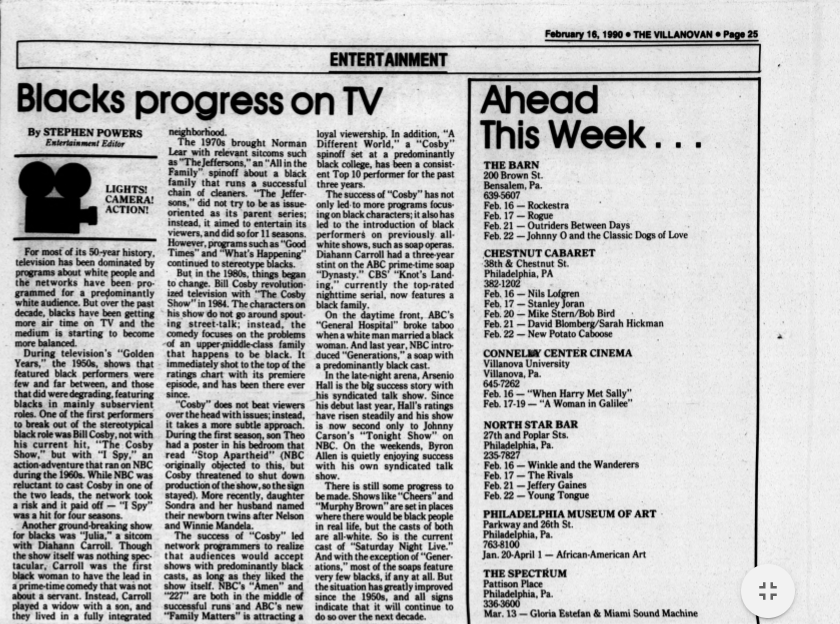 Would Powers be satisfied with the progress that has been made? Does this article feel strangely topical despite being thirty years old? Let us know your thoughts via Instagram (@villanovalibrary) or Twitter (@FalveyLibrary).

Kelly McMahon CLAS ’22 is a student assistant in the Communication and Marketing office at Falvey Memorial Library.