Comprehensive AND open sounds almost too good to be true, but the Regesta Imperii Literature Database (RILD) delivers on both fronts. Not only is it a comprehensive bibliography for medieval research, it is also an open access database. With over 2.3 million indexed publications, RILD by far surpasses the subscription-based International Medieval Bibliography with its barely half a million records.

While RILD does not have all the bells and whistles of a commercial product, its superior coverage and the fact that it is open to everyone make it appealing to a wide audience well beyond the ivory tower.

RILD is produced and published by the Akademie der Wissenschaften und Literatur in Mainz (Germany), but captures research in all major European languages and has an English interface in addition to its native German one. It has the usual basic and advanced search functions as well as a thesaurus, title word, and author indexes that are linked to publication records. The advanced search allows scholars to limit search results by language and publication type. Publication records consist of citations, descriptors, permalinks, and links to matching records in the Karlsruhe Virtual Catalog, a meta catalog that searches libraries worldwide. Records for essay collection also include table of contents. 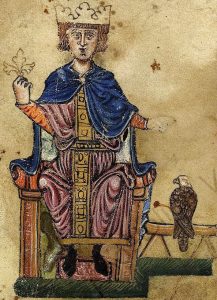 What started out as a bibliography of secondary sources cited in the Regesta Imperii (RI) project has quickly morphed into a comprehensive bibliography for medieval studies. The RI project to which RILD owes its existence and name is an ongoing collaboration of medievalists who inventory and record all surviving archival and historiographic sources of the rulers of the Holy Roman Empire from the end of the Roman Empire to 1500, including the records of selected popes.

Regesta Imperii stands for imperial register or catalog and the record for each regestum includes a short document summary in German together with the sources of the presented information. The RI project began in 1829 and was intended as a building block for the massive Monumenta Germaniae Historica (MGH) collection. MGH is a collaborative scholarly project that consists of carefully edited and transcribed primary sources from the Holy Roman Empire. The extensive catalogs of RI and MGH publications have been completely digitized and all volumes are freely available online, except for the latest three years of MGH publications.

I am grateful to Margaret Schaus, librarian at Haverford College and a medievalist, who pointed me in the direction of RILD. Schaus is the lead editor of Feminae: Medieval Women and Gender Index, another open access resource in the field. She also recommends Medieval Digital Resources, a curated database of peer-reviewed and open access digital resources for medievalists that is maintained by the Medieval Academy of America.

For more open access resources in medieval studies read the recent post about RELMIN, a digital archive of legal text related to the status of religious minorities, or visit the Library’s research guide for Medieval Europe.

Are you aware of other noteworthy open access resources in the field of medieval studies that should be featured on the Falvey website? Send us your recommendations.