“It would be a dangerous error to think of the Holocaust as simply the result of the insanity of a group of criminal Nazis. On the contrary, the Holocaust was the culmination of millennia of hatred, scapegoating and discrimination targeting the Jews, what we now call anti-Semitism.”

January 27 marks the 75th anniversary of the liberation of Auschwitz-Birkenau in 1945 and is designated by the United Nations General Assembly as International Holocaust Remembrance Day. It commemorates victims of the Nazi regime and promotes Holocaust education throughout the world. This week also marks the next event in The Albert Lepage Center for History in the Public Interest’s six-part series Revisionist History: “Revising the Holocaust.”

“Historical revisionism,” when associated with the Holocaust, is usually applied dangerously and disingenuously by Holocaust deniers attempting to deny, obscure, or trivialize the genocide of six million Jewish people and others by Nazi Germany during World War II, and to disguise their denial as academic or legitimate historical fact.

Once again we will be joining the Lepage Center with a selection of items from Distinctive Collections on display before the event. Our selections will focus primarily on publications from the United States, during or leading up to World War II. These items help to contextualize the Holocaust and serve as a reminder that we must recognize and be vigilant against hatred and discrimination.

Eugenics in the United States 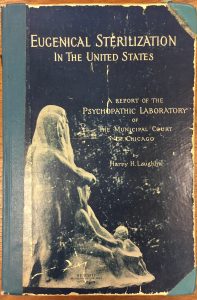 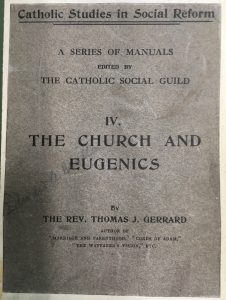 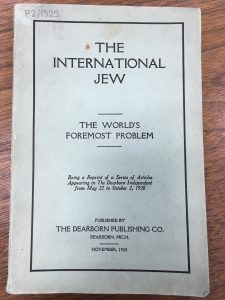 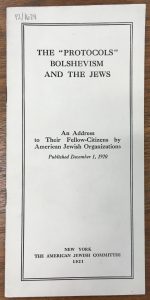 The International Jew: The World’s Foremost Problem is Part I of a four-volume set of reprints from a series of articles appearing in Henry Ford’s newspaper, The Dearborn Independent, in the early 1920s.

In contrast, The “Protocols,” Bolshevism and the Jews: an address to their fellow-citizens is a pamphlet that was distributed by American Jewish organizations as a response to the circulation of fraudulent antisemitic documents and specifically, The Dearborn Independent’s “attacks of extraordinary virulence upon the Jews.”

As founder of the Ford Motor Company, Ford was wealthy and influential. His publications have been cited as having influenced Adolf Hitler and Nazism. 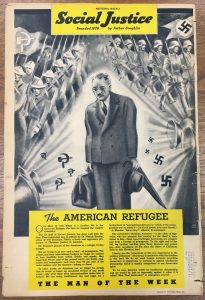 Father Charles Coughlin was an influential and outspoken American Catholic priest who gained prominence and wide audience through radio and his publication, Social Justice, which ran 1936-1942. He was eventually forced off the air in 1940 for increasingly pro-fascist and antisemitic commentary. Special Collections has the full run of this periodical.

We will have additional items with us from Special Collections at the event as well as some selected recent scholarship from the Falvey Memorial Library general collection. We encourage you to review subject librarian Merrill Stein’s course guide on genocide and mass killing and Director of Research Services Jutta Seibert’s course guide on The Holocaust in Eastern Europe.

We also highly recommend the History Unfolded project by the United States Holocaust Memorial Museum, which collects submissions from teachers, students, and any participant about different Holocaust-era events as reported in contemporary local newspapers in the United States.

“Revising the Holocaust” will take place Tuesday evening, January 28, in Driscoll Auditorium. Laura Bang, Distinctive Collections Librarian, and I will be there at 6 p.m. The event starts at 7 p.m.

For panelists and more information: https://www1.villanova.edu/villanova/artsci/lepage/events/revisionist_history.html.